World Beyond showrunner takes us through the Blaze of Gory 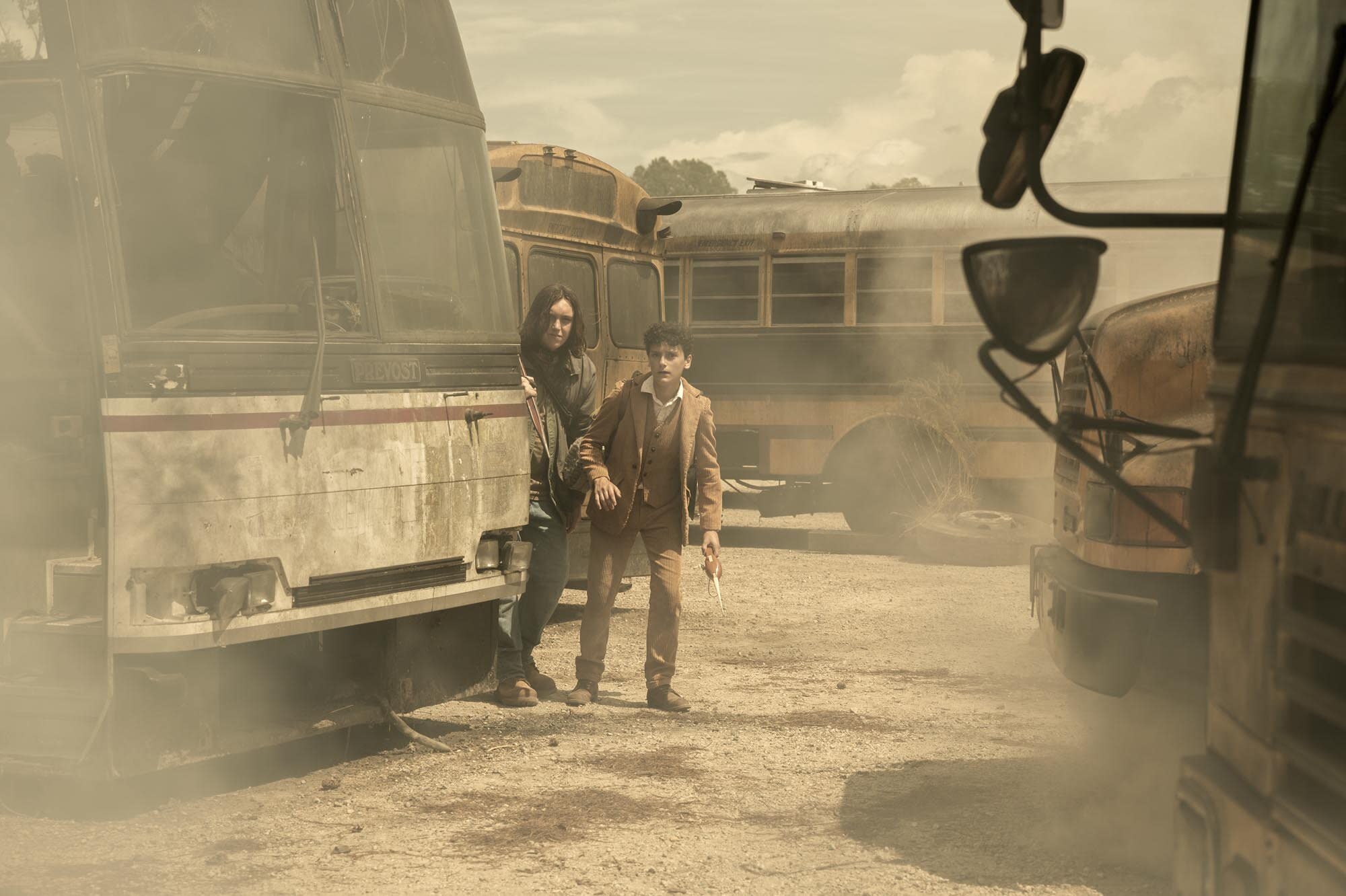 Warning: This article contains spoilers about Sunday’s episode of The Walking Dead: World Beyond, “The Blaze of Gory.”

The Walking Dead: World Beyond‘s Iris, Hope, Elton, and Silas encountered their first big hurdle on their journey to save Iris and Hope’s dad — the infamous Blaze of Gory. The group thought they had conquered the maze of tire-fire smoke, buses, and zombies… until they realized they had only conquered the very first part of the smoldering death pit. It seemed the only thing that could save the group was one of them sacrificing him or herself to sound a tornado siren to draw away the empties. Hope (Alexa Mansour) then took off in the middle of the night to be that person.

Meanwhile, when not dealing with his own zombies, Felix (Nico Tortorella) had to deal with his own demons — specifically his parents, who kicked him out of the house as a teen when they learned he was gay and then refused his help when the world went to hell. Felix made a side trip to go put his zombified parents out of their misery, only to turn away at the last second. Why? We asked World Beyond showrunner Matt Negrete about Felix’s change of heart, Hope’s big move, and more from the latest episode.

ENTERTAINMENT WEEKLY: First off, how did you all come up with the concept of the Blaze of Gory?

MATT NEGRETE: It was always something that Scott [M. Gimple, co-creator] and I wanted to do when we were working out what the season was going to be, and we really wanted something that could represent a point of no return for the characters. The idea being once they get over this hurdle, they’re home free and no one will be crazy enough to follow them through that. For the longest time, our tech version, we just called it the Moana reef, from the movie Moana, because we didn’t know what it was going to be for the longest time.

And then as we talked about it, we started to think, “What’s the cool set piece that we haven’t seen before?” We started researching tire fires, and what we discovered was that, if unchecked, technically a tire fire can go for years, and even decades. There’s some that have been known to smolder, if left unattended to, for that long. We just thought, “What if it’s just this massive industrial park or maybe a tire-recycling factory, something like that?”

With the idea that Nebraska is notoriously flat, you’d be able to see the smoke for miles, which would then attract empties. The longer we thought about it, the more we thought, “Yeah, that’s going to be something that is really cool and different. Something we haven’t seen before on any of the other shows.”

I love the idea of it feeling like these little pathways that could be maze-like in a way, so it would be easy to get turned around. When you’ve got hoods on, you got your masks on, you can’t exactly tell where sounds are coming from, and things are muted and muffled, and so we thought that could really add to the sense of suspense and tension through there.

I want to jump right to the big thing at the end here. What is it ultimately that causes Hope to leave in the middle of the night to go sound that manual tornado siren? What is it that makes her sacrifice herself like that?

I think in terms of the main group, it’s really Hope’s story in the end. There was an opportunity for her to tell her sister the truth about this woman she killed. What we learn in the pilot is that Iris [Aliyah Royale] is defined by what happened that night and the fact that she felt like she couldn’t be there for her sister. She believes the empties killed her mom because that’s what Hope said. There’s a line in the pilot where Iris says, “I felt I didn’t do anything that night. I froze, and now I want to do everything.” And as a result of that, she’s kind of lost her sense of what she wants for herself. In that sense, that’s part of what drives her to go on this mission to try to find and save their father.

Hope knows this, and she still can’t bring herself to tell Iris the truth of what happened, and so there’s this guilt that’s weighing on her throughout the entire episode. We see a little bit of that play out in that treehouse scene with Silas [Hal Cumpston], where he feels guilty because he couldn’t kill this one empty and now it’s come back to haunt them, and so Hope goes and kills it for him. She has a line to him, which is essentially, “Your mistakes shouldn’t have to follow you,” and that’s because she’s dealing with her own mistake that’s definitely followed her out there. And so with that plaguing her, with that really weighing on her, there’s this self-worth issue that’s come up for her where she thinks that if someone’s going to have to make this sacrifice, she’s just the one to be hurt because she’s less deserving of maybe living than her sister and the others that have come along for this journey.

Well, then during the journey, why is she leaving this trail? We see the can that she leaves and we see the graffiti for Felix and Huck [Annet Mahendru], clearly to give them markers so they can follow where they’re going. What is the intent and reasoning behind that?

It’s very un-Hope-like to do something like that. She’s the one that’s been the rebel. She’s the one that is up for taking chances, but I think for Hope, the idea of having this death weighing on her from all those years ago is having an effect on her. The last thing she wants is to have the death of maybe her sister and her friends weighing on her. And now that Iris is taking this leadership role, she doesn’t want Iris to feel responsible and feel this guilt that Hope herself feels. Everything has suddenly become very real for Hope. Theoretically, it sounds like, “Okay. Fine. Let’s go for it. Let’s do this.” But now that the rubber has met the road, she’s having second thoughts, and the stakes and the danger of this journey are really sinking in for her, and so she is having second thoughts.

She doesn’t, I think, want to necessarily not find her father, but she’s just really worried that people are going to die if they don’t find help. It’s quite possible that what she wants maybe necessarily isn’t to turn around, but at least for anyone following them to catch up to them. At least if there’s someone who has the skills out there, someone who can protect them, that’s someone that can help keep them safe. As we know, that someone is likely Felix and Huck, who are hot on their trail.

Obviously, a big episode for Felix as well. He goes back to his old house. He tells Huck he went there to kill his parents, who kicked him out of the house for being gay and are now presumably zombies themselves, but we don’t see him do that. We see him take out his weapon, go to the front door, see something moving inside and then walk away. What’s going on there, and why does he not go through with it?

Felix is someone who’s very much defined by what happened that night all those years ago. We see flashbacks to the night the sky fell. While everyone is running towards safety, he’s running from safety. We see he’s got an NSU sweatshirt on, which means he’s likely coming from the university, and he’s trying to save his parents. His father also has a line that has stuck with him over the years. It’s one of the last things that I think his father says to him, which is, “We don’t need your help.” But despite being rejected by his father and his parents, despite being kicked out of the house, he tries to save them that night and he couldn’t. He was still rejected, and despite that, despite being rejected by his parents twice, he still feels this need to help them.

So now that he’s out, back in his neighborhood for the first time in 10 years, he’s still feeling that need to help his parents. He wants to go back to his old house and see if they’re there. He sees those walkers passing by the curtains inside the house, and he has felt compelled to still help his parents despite everything they’ve done to him. There’s this moment of reckoning he has as he stands outside the house after all these years, of, he could put himself in danger again and try to finally be at peace and have them be at peace, and that, in of itself, that could then facilitate Felix being at peace.

But what he realizes, he doesn’t owe them anything anymore. He’s always felt the need to please others and he’s lived his life helping others. We see him doing that with Leo [Joe Holt] right now when he protects the girls. But this is, I think, his first step in living for himself and letting go of the past, and finding freedom in his ability to just walk away and realize that his parents are gone. He doesn’t need to put himself in jeopardy. He’s not living in the past anymore. He’s going to live in the future. That future he sees is his current family, and it’s protecting Iris and Hope, and who knows, perhaps Leo as well if the girls can convince him to keep going.

We’ve seen in two episodes, two big flashbacks so far. Is this something we’re going to continue to see in the episodes? Character flashbacks?

Yeah, that’s something that we do in almost all the episodes in season 1. I really wanted to spend this season having the audience getting to know these characters. Really, the idea is using each episode to peel back the layers of these characters and find more about them. Felix, for example, we know now that he owes his self-worth to his parents, but he’s finally letting that go. But we’re still picking up the pieces of how did he end up at that university? Who did he become after his parents kicked him out? How did he come into contact with Leo, become part of this new family?

We’ll be slowly doling out that information in the episodes to come, and we’re going to be doing more of that in the future episodes. We’re going to learn a little bit more about Silas in episode 3, and Elton [Nicolas Cantu] has a great backstory that we’re going to be getting into very soon. I’m really excited for people to learn more about these characters and how their pasts define who they are today.

What can you say about what’s coming up next on World Beyond?

We’re going to be learning a lot more about the characters. We’re going to be seeing a lot more of their backstories as well. Episode 3 is probably one of our most action-packed episodes we’ve done with these huge special effects and great makeup effects from Greg Nicotero’s team. We’re also going to learn more about the CRM in this next episode coming up. The thing I’ll say is that each episode just keeps building and building and building, and there’s some pretty great things coming down the pike.