With global heating, expect inferno seasons in the American West 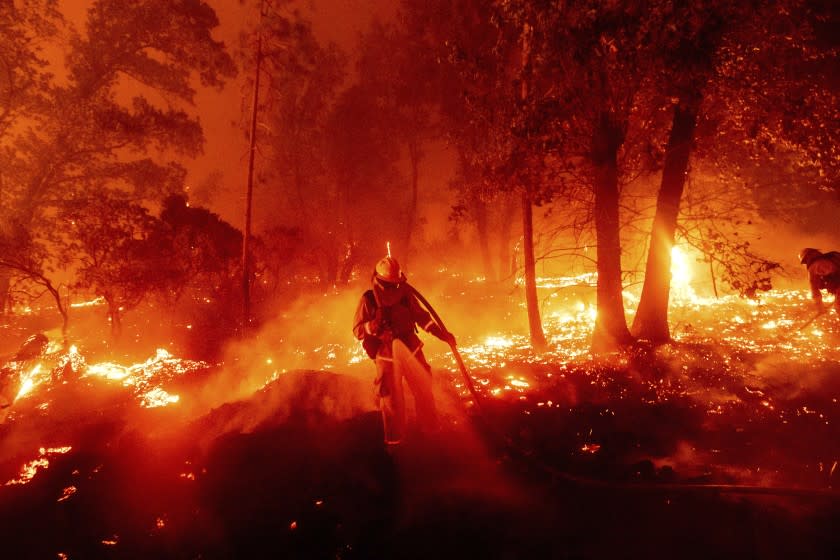 More than 3.1 million acres have burned in California this year — some 3% of the state — with many wildfires still at zero containment and months of fire season left to go. This far exceeds the previous record set in 2018, when 1.7 million acres burned, including the town of Paradise.

These raging fires, some exacerbated by the blistering heat last weekend, are the direct result of climate change. The planet is currently 1.0°C to 1.2°C (about 2°F) hotter than it ought to be. This excess heat is entirely due to humans, mainly from burning fossil fuels and destroying forests. These activities release carbon dioxide into the atmosphere, which blocks some of the infrared heat photons that otherwise would radiate away into space.

Global heating now makes heat waves more extreme and more than three times as frequent as they were in the 1960s. Heat records are being shattered everywhere. Even talking about records is starting to feel pointless when every year is practically guaranteed to be hotter than the last.

Attribution studies now routinely connect individual heat waves to human activity. For example, Siberia’s searing 2020 heat wave was made 600 times more likely because of climate change, and Europe’s record 2019 heat wave was made up to 100 times more likely. These blasts of intense heat create hot and dry conditions that are ideal for fires, especially in ecosystems that thrived under cooler, damper conditions.

We may be experiencing an irreversible ecological tipping point, with forests in the West dying, to be replaced by scrub and grass.

Tragically, even this year’s disasters are not the worst we can expect. In fact, heat waves and fires like what we are seeing in California, Oregon and Washington will continue to worsen as long as humanity continues to burn fossil fuels. At the same time, it no longer seems possible to limit the increase in global average temperature to 1.5°C above pre-industrial levels, though even a few years ago we could have achieved that goal.

Similar changes are occurring throughout the world, and climate impacts are, of course, not limited to infernos of heat and fire. Hurricanes, floods, lightning storms and snowstorms are all getting worse, and will continue getting worse. Ice sheets and glaciers are melting, and sea-level rise will inundate many of our coastal cities in the coming years, forcing us to abandon parts of them.

Less clear, but looming large in the climate future, are synergistic impacts on human systems, such as drinking water, food, infrastructure and geopolitics, which are built on top of rapidly degrading ecological systems.

These interconnected civilizational systems may not have the resilience to withstand intensifying climate shocks and support modern life as we know it for much longer. When pressure on those nonlinear systems increases steadily day by day, as basic climate physics ensures will happen as long as we continue burning fossil fuels, there will inevitably come points when they break. Such nonlinear collapse will be both surprising in its details and horrible in its consequences. We know that marginalized communities will be affected disproportionately.

The decisions we make collectively over the next few years will be consequential on geologic timescales. Global heating could last hundreds of years, and biodiversity loss could last millions of years. We have reached the point where we must radically transform how we live on this planet, yet governments throughout the world continue to accelerate fossil fuel production and infrastructure.

In the face of this visible tragedy, we take hope in two simple facts. First, this is a problem entirely of human making, which means we can solve it if we choose to. Second, the grassroots climate movement has gotten so strong that climate is rapidly becoming the deciding factor in major elections around the world.

Each one of us can contribute by adding our strength to this movement. As humans on the only place in the universe known to have life, we should think of this task as one of cosmic importance.

Peter Kalmus is a climate scientist and author of “Being the Change: Live Well and Spark a Climate Revolution.” @ClimateHuman. Natasha Stavros is a fire ecologist.