Will the tropical Atlantic keep churning out record-setting storms this week? 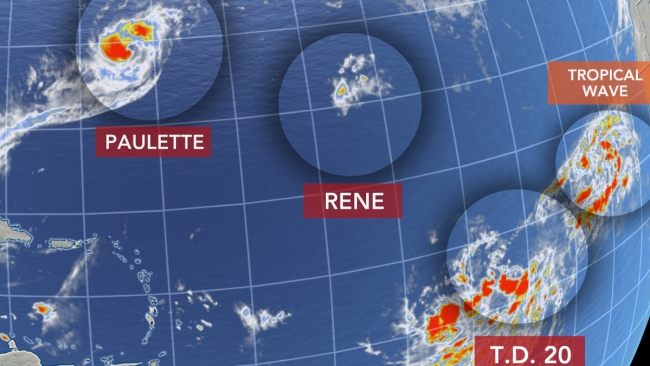 The Atlantic Ocean has spawned named storms at a blistering pace this year, with Paulette, Rene and Sally the most recent additions in what is on track to be a historic season. Forecasters say the last three names on the Atlantic hurricane season’s list for 2020 could soon be exhausted as additional disturbances are being monitored this week.

So far in the 2020 season, Cristobal and every storm from Edouard through Sally all became the earliest storm to develop in the basin for their respective letters.

As Paulette barrels toward Bermuda, Sally aims for the Gulf Coast and Rene harmlessly dissipates over the open Atlantic, forecasters are keeping close watch on several other areas in the basin for additional tropical activity.

“The current early season record holders for the letters T through W were all set in October 2005, but many or all of these may be replaced prior to the end of September,” AccuWeather Senior Meteorologist Alex Sosnowski said.

The next name on the list of tropical storms for 2020 is Teddy, followed by Vicky and Wilfred.

AccuWeather meteorologists say Tropical Depression 20, which formed over the central Atlantic on Saturday afternoon, may be the latest system to become a named storm in the basin.

“Conditions will be favorable for strengthening over the next several days, and it seems likely that this system will become a tropical storm,” AccuWeather Senior Meteorologist Randy Adkins said.

Additional strengthening is likely later in the week, with the system expected to reach hurricane status.

“Current indications are that the system misses the Lesser Antilles, but all interests across the Lesser Antilles should closely follow the progress of the system as a farther south track could bring adverse weather to the region later in the week,” Adkins said. Interests in Bermuda may also want to keep close watch on the storm’s path, should it take a more northeasterly course.

Another disturbance that recently moved off the west coast of Africa will bring locally heavy rainfall to the Cabo Verde Islands into Sunday night is also being monitored for tropical development this week.

Even if this disturbance, dubbed Invest 97L by the National Hurricane Center, organizes into a tropical depression or storm, there is high confidence that the system will track to the northwest into the open Atlantic with no impacts to land. Shipping interests in the area will want to closely monitor the progression of this system, however.

“There are indications that yet another tropical wave will cross the Atlantic during the Sept. 17-20 time frame,” AccuWeather Senior Meteorologist Adam Douty stated.

A path to the southwest and then south is projected with this feature.

“Moderate to strong wind shear will help to inhibit development with this disturbance, though there is a low chance it could become a tropical depression. The primary impact would be locally heavy rain in eastern Mexico,” Douty said.

AccuWeather meteorologists will continue to provide updates on the latest developments in this record-setting hurricane season.

Tropical storms and hurricanes can form well beyond the statistical peak of hurricane season, which is Sept. 10-11.

Hurricane season does not officially end until the end of November, and named systems could emerge into December this year.

Once the English alphabet is exhausted for this season, with Wilfred being the last name on the list, the Greek alphabet will be utilized for only the second time ever. The first time was during the 2005 season when there were 28 named storms. The 2020 season has the potential to rival that record with its current hyperactive state that is likely to continue through much of the remainder of the season.