Will The Most Important Observatory In Astronomy’s History Survive The 2020 Wildfires? 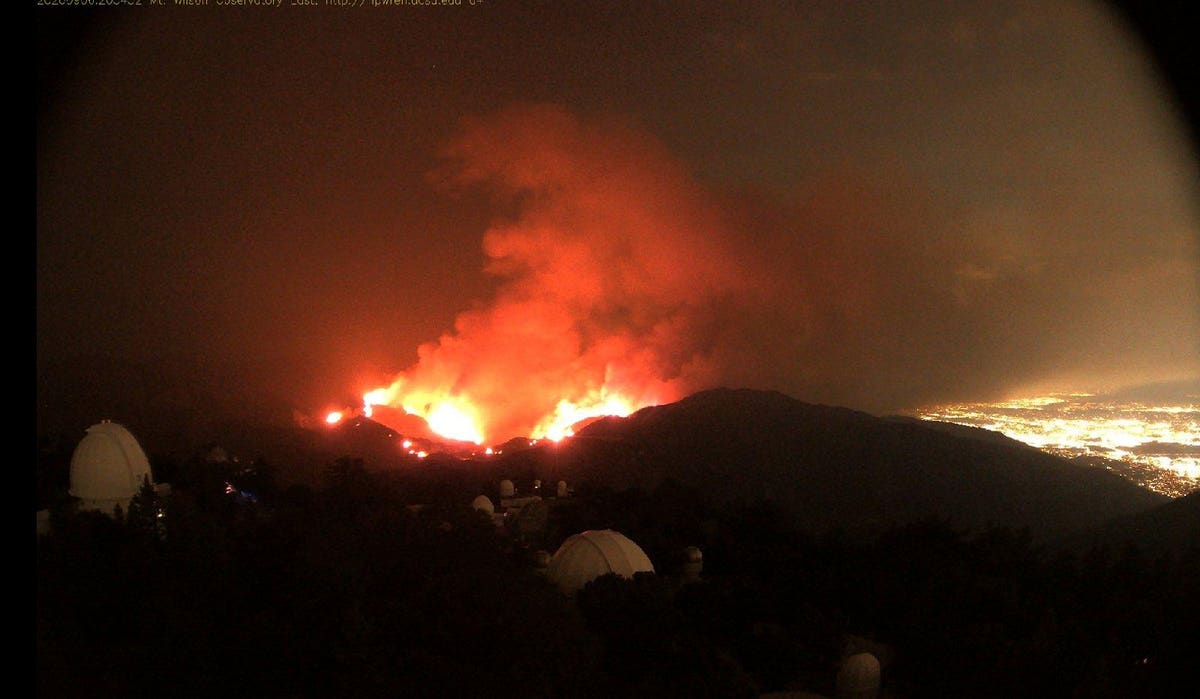 100 years ago, our understanding of the Universe was very different from what it is today. Einstein’s General Relativity, our theory of space, time, and gravitation, was only five years old, and was far from universally accepted. Most astronomers thought that the entire Universe was contained within the Milky Way and was static: neither expanding nor contracting with time. And the largest, most powerful telescope in the world had just been completed: the 100-inch (2.5 meter) Hooker telescope, which reigned as the largest-aperture observatory from its completion in 1917 until 1949.

That telescope was located atop Mount Wilson, and was the main instrument responsible for the most important revelation and revolution in astronomical history. Not only were the mysterious spiral nebulae determined to be their own galaxies, or “island Universes,” all unto themselves, but the Universe was determined to be expanding, not static, all because of this observatory. Today, the 41,000 acre Bobcat Fire rages with just 3% containment, threatening to burn down the now-evacuated observatory. Here’s how Mt. Wilson forever changed our view of the Universe.

In the science of astronomy, there’s no substitute for aperture: the size of your telescope’s primary mirror. Regardless of the type of light you’re trying to observe, a larger-aperture telescope will always have two advantages over a smaller one:

When you view a distant target, that translates into greater sensitivity on both of those fronts. Not only can you resolve individual stars and smaller features within extended objects that are farther away, but you can detect fainter objects and even notice differences — including changes over time — of objects that you can just barely detect otherwise.

By the early 1920s, we had identified many of the nebulae in the sky as having a spiral structure, but we didn’t know what they were. The leading idea is that these were proto-stars, or solar systems like our own that were still in the process of forming. The reasoning was that when matter collapses to form stars, it’s going to collapse in one direction first, leading to a disk. That disk will rotate, developing instabilities, while the central region continues to shine brightly. Over time, that disk will form planets, while the star eventually evaporates the remaining matter, leading to a conventional star system.

The alternative was that these were actually entire galaxies unto themselves, located far beyond the Milky Way. The biggest piece of evidence supporting the alternative idea was indirect but compelling: if you broke the light from these objects up into their individual wavelengths, you could see the same absorption signatures you find from atoms here on Earth. Only, for these spiral nebulae, they were shifted towards either the red or the blue by large amounts, indicating their speed. And those speeds were far too quick; if they were contained within our galaxy, they’d escape the Milky Way’s gravity.

That’s where the new capabilities of the 100-inch Hooker telescope on Mount Wilson came in. Unlike all the other telescopes in the world, this was the largest, most precise observatory ever built. When it viewed a distant spiral nebula, it could not only see many intricate details in these structures, but could even resolve individual stars. In the early 1920s, astronomer Edwin Hubble used this telescope to view the great spiral nebula in the constellation of Andromeda: the largest spiral, by angular size, in the entire sky.

His initial plan was simple and straightforward: to look for novae in that constellation. White dwarfs — the remnants of Sun-like stars — had recently been discovered and characterized, and the idea is that some white dwarfs can accrete matter from a companion star. When they gain enough matter, nuclear fusion ignites on the surface, and a bright flare-up, known as a nova, ensues. Hubble’s goal was to view this nebula and measure the novae inside, but he got a rude surprise while making his observations.

He saw first one flare, and marked it with an N. Later, he found a second, and subsequently, a third. Many nights later, he found a fourth, but in the exact same position as the first. He crossed out the N and then, in big red letters, wrote “VAR!”

This was Hubble’s “eureka” moment. Novae, even in the most extreme systems ever discovered, cannot simply recharge overnight. It takes long periods of time for a nova that flares to ever flare again. Hubble quickly realized that these were likely not novae at all, but variable stars: stars that go from bright to dim to bright again, periodically, severely, and relatively rapidly.

By combining his measurements with prior work on variable stars, Hubble was able to use Henrietta Leavitt’s relationship between the period and the luminosity (or brightness output) of a variable star to estimate the distance to that star.

The results were immediately breathtaking. Instead of hundreds or thousands of light-years away, which was the previous maximum distance for all other objects within the Milky Way, Hubble calculated that the stars in Andromeda must be closer to a million light-years distant. (The modern figure is closer to 2.5 million light-years.) Armed with this key observation, Hubble had settled a great debate, and proved that these spiral nebulae were entirely their own galaxies, well beyond the Milky Way.

But Hubble didn’t stop there. Over the next few years, Hubble and his assistant, Milton Humason, started surveying the known spirals in the Universe, searching for these variable stars and seeking to measure both their brightness and their period of variability. Using the same relationship they’d used previously — now known as Leavitt’s Law — they were able to measure the distances to a wide variety of these galaxies.

By combining the distance measurements with the spectroscopic measurements of how severely the light was redshifted or blueshifted for each of these galaxies, scientists now had the data to see if there was a relationship between the distance to a galaxy and how quickly it appeared to be moving. Independently, Georges Lemaître, Howard Robertson, and Hubble himself all reached the same conclusion: the speed at which a galaxy appears to recede from us is directly proportional to its distance from us. In one fell swoop, Hubble had demolished the idea of a static Universe, and replaced it with the notion that the Universe was expanding.

In many ways, this was the beginning of modern astrophysics and cosmology. It caused Einstein to abandon his “cosmological constant” and the idea of a static Universe, later calling it his “greatest blunder.” It led, over time, to the formulation of the Big Bang theory of the Universe’s origin, and to the eventual prediction of a hot, dense, uniform, early state for our Universe.

Most importantly, it spearheaded the ultimate transformation in our human understanding of the cosmos. These enormous existential questions that we’d been pondering since time immemorial:

were no longer questions for poets, philosophers, or theologians. Instead, these were questions that science could actually provide answers to. Over the rest of the 20th century and the first two decades of the 21st (so far), science has revealed these answers, only to raise additional, compelling, follow-up questions.

Meanwhile, fascinating discoveries at Mt. Wilson continued through the first half of the 20th century. In the early 1930s, Fritz Zwicky measured the motions of individual galaxies within a large galaxy cluster: the Coma cluster, and determined that they were far too fast to remain gravitationally bound within the cluster. The only resolution, he claimed, was that there was some additional form of mass present — dunkle materie (dark matter) — holding it together. Although the idea went largely unexplored until the 1970s, Zwicky’s observations were robust and correct; if we had taken them more seriously, we could have gotten a 40 year head-start investigating dark matter.

In the 1940s, Walter Baade used that same telescope to discover two fundamentally different types of Cepheid variable star, resolving a number of paradoxes with Hubble’s original work. For the first time, we could now begin accurately computing quantities like the age and size of the Universe. In many ways, this one observatory brought astronomy into the modern era.

And now, in September of 2020, California’s Bobcat fire threatens to burn down the entire observatory and the surrounding complex. The fire, which was only 6% contained on Thursday, September 10, has now spread to more than 41,000 acres, with containment dropping to 3%. As the National Forest Service reported on September 15,

“Acreage this morning is 41,231 with 3% containment. Crews worked all night to keep the fire from reaching Mt. Wilson and the communities. Reduced containment is due to fire growth without our being able to increase containment lines.”

All observatory personnel have been evacuated, while firefires light backfires to rid the area of dry plant matter. An array of cameras around Mount Wilson’s summit show the fire and smoke, and the next few days will be critical in determining whether the observatory survives or is entirely destroyed. A vital part of astronomy’s history, dating all the way back to 1904, may be about to go up in flames.

The Mount Wilson Observatory site was not only a vital part of astronomy’s history, but has recently found new life as an outreach and teaching tool. Since modern deep-space observations require darker skies than can be found throughout most of the continential United States, the 100-inch Hooker telescope was converted into the world’s largest telescope dedicated to use by the general public. In 2014, the conversion was completed, and regular observing has been ongoing for the past five years.

When a human eye looks through that eyepiece, we can resolve individual light sources down to a precision of 0.05 arc-seconds: just 1/72,000th of a degree, more than a thousand times sharper than the unaided eye can see on its own. According to the observatory’s official Twitter account, the fire is just 500 feet away and 12 companies of fire professionals are on-site to fight it. For over 100 years, Mt. Wilson has revealed the Universe to us. Whether the observatory survives or not, no fire is hot enough to extinguish the knowledge we’ve gained from it.