Why Pet Pigs Are More like Wolves Than Dogs 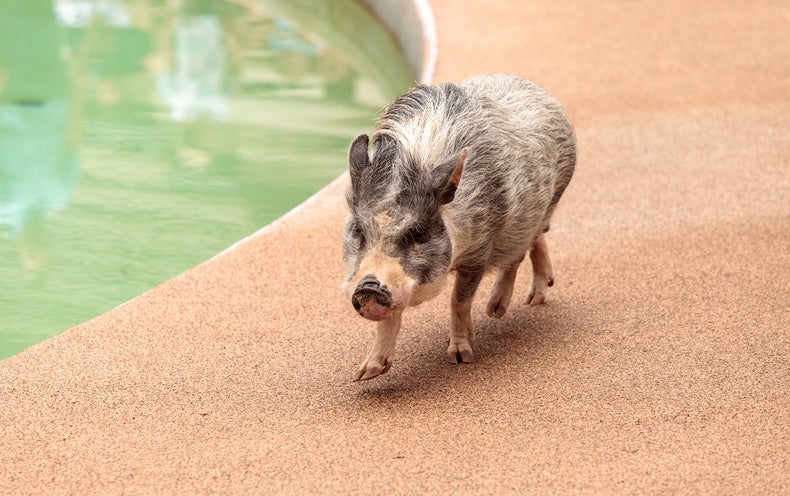 It’s a classic television trope: Timmy has fallen down a well! Lassie can’t save him herself, so she runs to find help. Actually, Timmy never did fall down a well in the entire run of the TV show, but the idea that a dog could seek help from a human for help does have a solid basis in science.

In what’s known as the “unsolvable task” experiment, a dog first learns how to open a puzzle box with a tasty treat inside. The puzzle is then secretly switched for another that’s impossible to solve. After becoming frustrated, dogs shift their attention away from the puzzle and onto a nearby human, and then back to the puzzle. The dog attempts to shift the human’s attention to the puzzle as a request for help. Human infants do the same thing. Such efforts are called “referential communication.”

So if dogs behave this way, you might expect the same from their close relatives, wolves. But when researchers tested wolves raised by humans, the animals just kept trying to solve the puzzle, never seeking help. Since the dogs and wolves were all raised the same way and by the same people, domestication must be responsible for the behavior. So researchers began studying other domesticated creatures.

“Other animal species, for example horses [and] goats, have been tested in this test. But there were no direct comparisons with dogs.”

“When pigs live in the wild, or even wild boars, these animals live in groups. They need to communicate with their conspecifics to be able to live.”

Which is why the researchers decided to compare pet dogs with pet pigs. While the pigs revealed that they were capable of referential communication, they didn’t actually turn to people for help. Once the task became unsolvable, they acted more like wolves, determined to find a solution on their own. The results were published in the journal Animal Cognition. [Paula Pérez Fraga, et al. Who turns to the human? Companion pigs’ and dogs’ behaviour in the unsolvable task paradigm]

“What domestication means is literally that there’s a genetic change in the animal, in the species from their wild relatives. And normally this genetic change has appeared because of human pressure.”

Most domesticated animals, including dogs, cats, horses, goats, foxes, and so on, show similar anatomical and physiological changes associated with domestication. But Fraga says her study shows that the domestication process can proceed along different pathways in different animals. And that could explain why domestication and sociality alone can’t explain why dogs react the way they do when faced with an unsolvable puzzle.  Fraga thinks that it could be related to their domestication history.

“Their domestication was different—pigs have been domesticated mostly for being a meat resource.”

It was only later that we started treating some pigs as pets. Dogs, on the other hand, were treated as companion animals from almost the beginning. Which appears to explain their willingness to ask for our help.

(The above text is a transcript of this podcast)