What is a vaccine and how do they work? Find out in Science with Sam 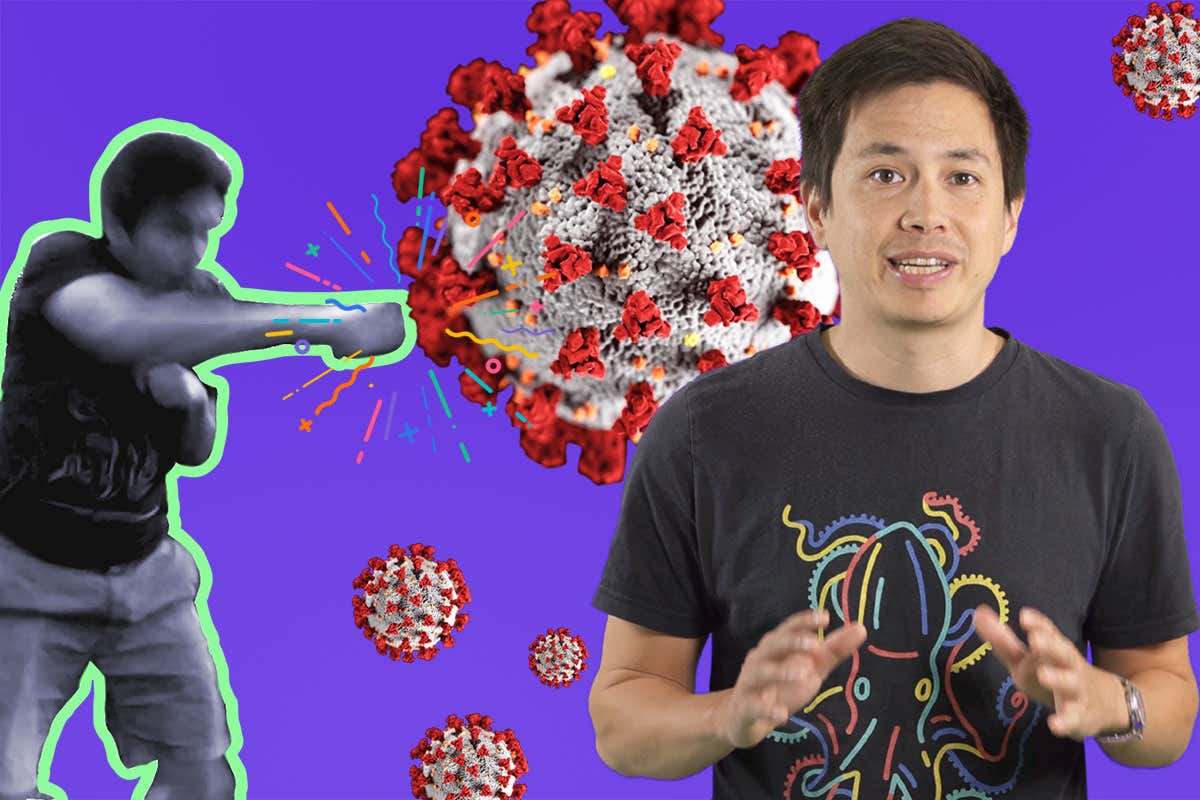 Since the first vaccine was developed in 1796, vaccinations have been phenomenally successful at preventing infectious diseases, and wiping out some altogether.

The latest video in our new YouTube series, Science with Sam, explains how vaccines work by training your immune system to recognise viruses and bacteria. Ever wondered how flu vaccines are made or why you need a new one every year? Click play to find out.

We also take a look at the unprecedented worldwide effort to develop a vaccine for the coronavirus, and consider the challenges involved in making, testing and distributing covid-19 vaccines.

Tune in every week to youtube.com/newscientist for a new episode, or check back to newscientist.com

More about Science with Sam

Most of us have never had to worry about getting smallpox, polio or diphtheria. A hundred years ago, these diseases were common killers. Now, smallpox is a thing of the past, while polio and diphtheria are very rare in most of the world. The reason? Vaccines.

Vaccines are a way of training the immune system for a big fight, so that when it comes up against the same opponent in the future, it knows exactly how to defeat it.

When you encounter a virus or bacterium for the first time, your body has a hard time fighting it. But over time, it learns to recognise the danger. Your immune system produces powerful proteins called antibodies that target and eliminate disease-causing microbes.

After you recover from an infection, specialised cells remain in your blood and keep a memory of that pathogen – they’re called memory cells – so the next time you face the pathogen, your body can quickly produce the right antibodies to fight it off.

Vaccines are a clever way of harnessing this mechanism to make us immune to a disease. They are made of weakened or killed viruses or bacteria that trigger an immune response, without making us ill.

The first vaccine was developed in 1796 by Edward Jenner.  At the time It was commonly believed that dairymaids were immune to smallpox because they were commonly exposed to cowpox, which is a related but less deadly virus. Jenner decided to test this idea by injecting an 8-year-old boy with pus from a dairy maid’s cowpox lesions. A few months later he injected the boy with smallpox and found the boy was indeed immune. Who said ever said science was pretty?

Since then, vaccination programmes have been extremely successful at preventing diseases, and even eliminating some altogether. Smallpox, a disease that killed around 300 million people in the 20th century, was finally eradicated in 1980.

What about the coronavirus? Right now, there are over 100 vaccines currently in development. Scientists have moved incredibly quickly, considering we knew almost nothing about this virus at the start of this year. It normally takes years to get to this point. The fastest vaccine ever developed before was for Ebola and that took five years.

There are several different ways to make a vaccine  being tried. One is to use whole viruses that have been inactivated so they can’t cause a full infection. This might be done by killing them with heat.

Then there are vaccines that are made from live viruses, but they are weakened so they won’t grow well in the human body. These vaccines tend to generate a strong and long-lasting immune response. For example the MMR vaccine, for measles, mumps and rubella, contains three live viruses.

Some vaccines put viral molecules into the body – the important bits that our immune cells can recognise – rather than whole viruses. This is how the injected flu vaccine works, and several groups are working on coronavirus vaccines like this.

The flu virus, or influenza, is a particularly difficult virus to vaccinate against, because there are many variants, or strains, that circulate. It’s like the virus has many hats, and changes them often, and that makes it hard for our immune system to recognise it when a new one comes around. To produce the vaccine, the virus has to be grown in chicken eggs in a process that takes many months and millions of eggs. Every year virologists have to predict which flu strains are going to dominate in the next season, so that companies can make enough doses to meet demand. Sometimes they get it wrong, and even when they’re right, the mutating virus might mean the vaccine doesn’t work as well as we hoped.

What we really want is a universal flu vaccine based on parts of the virus that don’t change. Research on that is ongoing, but unfortunately it doesn’t get as much investment as it needs

A relatively new approach that is being investigated is to make a vaccine containing the genetic instructions for making viral proteins, in the form of DNA or RNA. Once inside the body, the genetic code causes a person’s cells to produce distinctive proteins normally found on the virus. These proteins trigger an immune response, and that creates an immunological memory.

The University of Oxford is working on a vaccine that uses a harmless virus to deliver the viral genes into cells. It’s based on a virus that causes colds in chimpanzees, but it’s been genetically modified so that it can’t reproduce in humans. The first clinical trials have shown that it is safe and induces a strong immune response.

For all the latest news on vaccines and the coronavirus why not subscribe to New Scientist?  There’s a special discount code for you: get a 20 per cent discount by entering the code SAM20.

Despite all the effort being put into coronavirus vaccines, there’s no guarantee that this will give us the magic bullet we’re looking for. There’s so much we don’t know about how our immune systems respond to the virus and it may not even be possible to generate long-term immunity. A vaccine might mean you just get a bit less sick from the disease, and you might need a new dose each year.

Then there is the challenge of manufacturing and distributing billions of doses to every country in the world. It may take years to make enough to go around, raising tricky questions about who should be first in line. Some countries including the UK have made deals to get their hands on the first shipments, before the vaccines have been proven to work.

To defeat the pandemic, we need to make sure everyone who needs vaccines has access to them. We need to think globally, cooperatively, and act less like children squabbling over cookies.

To successfully wipe out a disease, a large proportion of the population needs to be inoculated, creating what is known as herd immunity, meaning there are enough immune people in the population to stop a virus from circulating. That brings us to another problem: some people are deeply sceptical about vaccines, which could be an obstacle to getting vaccination rates up to the levels required.

This mistrust has been fuelled by unfounded scare stories, such as the false idea that the MMR vaccine causes autism. All vaccines have to be rigorously assessed for their safety before they are used widely, and continue to be monitored after they are rolled out. Large clinical trials have repeatedly found no link between the MMR vaccine and autism.

Despite this, rising anti-vaccination sentiment has led to a surge in measles in the US,with more than 1000 cases reported in 2019. And in a recent survey, 1 in 4 people in the US said they wouldn’t take a coronavirus vaccine if it was available.

According to the World Health Organization, immunisations prevent an estimated 2-3 million deaths every year, in people from all age groups. By any measure, vaccines are one of the most successful innovations humankind has ever come up with. The coronavirus has reminded us just how vulnerable we are to infections, and that new diseases can emerge at any moment. Vaccines are our best hope for defeating them.

What is a black hole? And could you survive one?

Is our reality just one part of a multiverse?

More on these topics: