What Can the U.S. Navy Learn from Science Fiction? 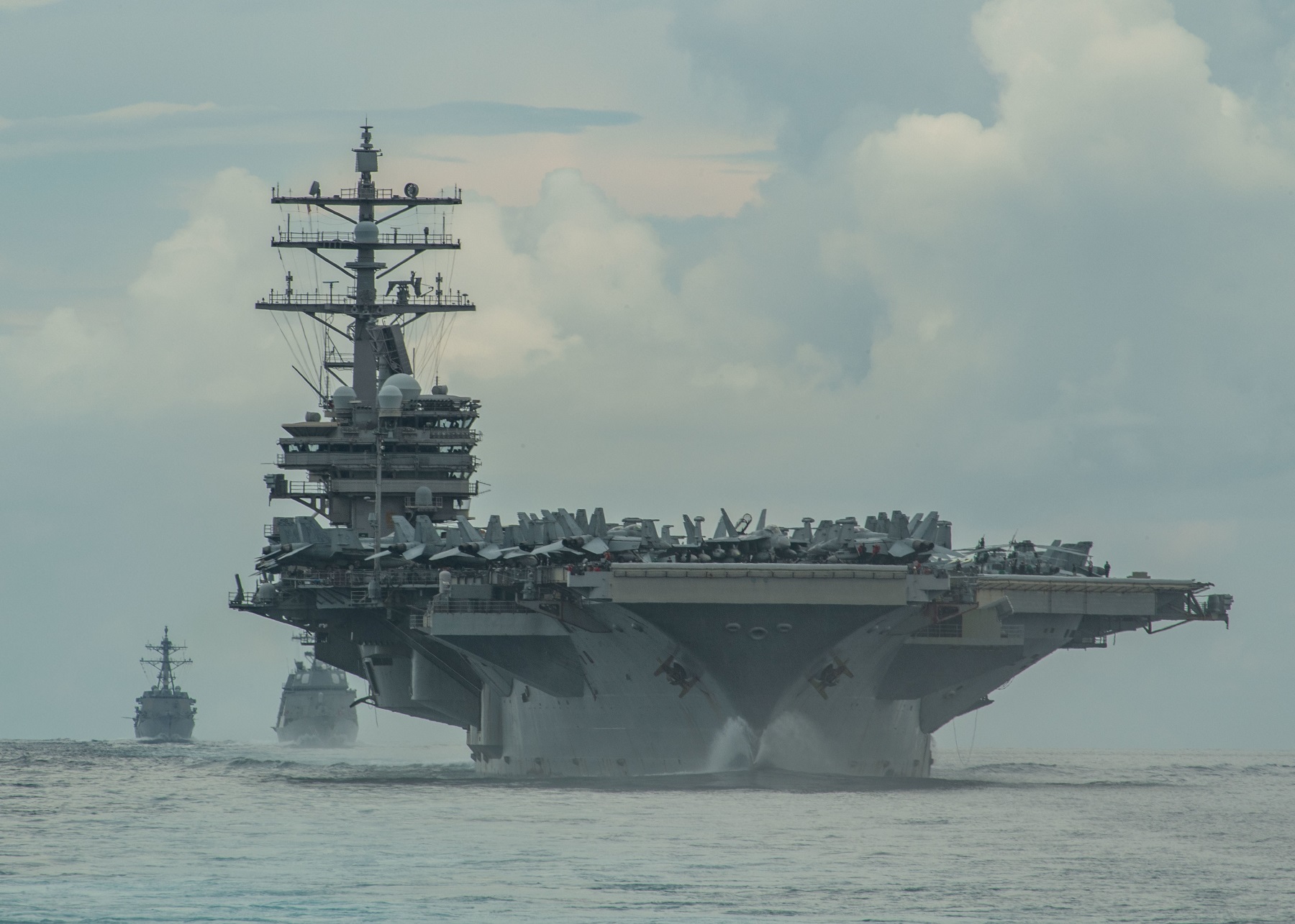 Here’s What You Need To Remember: Throughout most of its history, the U.S. Navy manned its ships under the reasoning that it takes a surplus of manpower to fight a ship in combat. Combat means losses. Now imagine Cylon pinprick attacks’ impact on Galactica and her coterie were it “minimally manned”—that is, if every crewman were assigned multiple jobs, and if the vessels lacked any manpower reserve when (not if) battle damage and casualties occur.

How would you punk the U.S. Navy if the lords of naval warfare handed you the keys to, say, China’s navy? Well, you might do the obvious thing: read or watch some science fiction!

In the latest Star Trek flick, for instance, a new foe harnesses swarm tactics to eviscerate the starship Enterprise. A coordinated stream of small craft overpowers the starship’s defenses through the simple expedient of presenting more targets than the Enterprise crew can shoot down. Its overseer then concentrates fire at vital nodes to dismember the ship’s structure.

Such tactics are an otherworldly counterpart to saturation missile barrages meant to overwhelm U.S. surface combatants’ Aegis combat systems. Rather than try to evade Aegis defenses, attackers simply aim more rounds at this combination radar, fire-control and surface-to-air missile system than it can handle. Some get through—and sow havoc. Life imitates sci-fi.

And then there’s Battlestar Galactica, a TV show with a similar ripped-from-the-headlines feel. The conceit behind the show: rather than risk a slugfest against the human colonies’ fleet of capital ships and their Viper fighter squadrons, the archenemy Cylons insinuate a computer virus into the fleet. The virus spreads through the ubiquitous computer networks whereby commanders coordinate their endeavors. It disables heavy ships and fighter spacecraft alike, leaving the fleet easy prey.

Sound strategy, that. Why duel a stronger antagonist and risk losing when cyberwarfare can nullify combat power before shots are fired? Galactica, an aged man-of-war, rides out the onslaught because her old-school commander, William Adama, refuses to permit the computers on board to be networked. When modern Vipers—the F-35s of this faraway universe—shut down, the battlestar’s deck crew salvages obsolescent fighters. Old tech proves too low-tech for viruses to infect—yet still lethal enough for skilled aviators to repulse attack.

But Battlestar Galactica also hints at subtler ways to outfight a stronger opponent. The weak need not vanquish the strong outright. They can harry the strong—enfeebling them until their margin of supremacy vanishes.

Wise combatants, then, study their foes, discern their strengths and frailties, and design operations to tame the former while exploiting the latter. A prospective enemy like China would try to divine the American “center of gravity” or, as Carl von Clausewitz describes it somewhat mystically, the “hub of all power and movement, on which everything depends.” Should a fight erupt, Chinese forces would then aim “blow after blow” at that center of gravity—pounding away until U.S. forces capitulated or, more likely, lost heart and went away.

There’s a curious thing about centers of gravity, though. They can be innocuous. Petroleum refineries turned out to be a center of gravity for Hitler’s war machine, humble freighters and tankers for Tojo’s. By pummeling industry and merchantmen from sky and sea, the Allies starved Axis forces of irreplaceable war materiel.

A related idea from Prussia’s master of strategy: Clausewitz advises strategists that, in the folksy terms I like to employ in Newport, the enemy is not a potted plant. In strategy, in other words, one antagonist doesn’t work its will on a lifeless mass that’s unable to strike a counterblow. Rather, warfare involves an intensely interactive “collision of two living forces”—both imbued with ingenuity and with zeal for their causes. It’s the Golden Rule of combat: the foe does unto you even as you do unto him.

But here’s the thing. It may be possible, through dexterous strategy and operations, to transform a foe into a potted plant—dulling his reactions and material capacity until he’s little more than an inert mass with little prospect of protecting himself or thwarting your will. Better yet, such operations could yield an opponent prone to self-defeating mistakes. Inert pugilists make easy pickings.

By the Golden Rule, moreover, he may do things to reduce you to a potted plant, hampering your ability to adapt to change to the tactical surroundings—change he himself may have wrought. If he renders you inert, you can no longer compete effectively or efficiently. He imposes his will on you—and wins.

Which brings us back to the sci-fi universe. In the very second episode of Battlestar Galactica, titled “33,” the Cylons hit upon an ingenious stratagem: weary Galactica’s and the colonial fleet’s defenders through small-scale but frequent assaults, then strike a fatal blow against a foe too tired, addle-brained and mistake-prone to fight back effectively.

Clausewitz would instantly recognize the approach. He notes that the components of combat strength are force—material capability—and resolve. Quite so. The Cylon onslaught targets both the hardware and human dimensions, enervating the colonial fleet over time. The Cylons smuggle a homing device onto a transport to track its movements, then repeatedly “jump” in faster-than-light strike forces to menace the fleet. Cylon fighters appear every thirty-three minutes. It becomes plain to Galactica’s leadership that the attacks’ purpose is less to inflict damage than to compel the fleet to keep jumping. Relentless assault prevents repairs and upkeep to fighting ships while keeping crews awake.

The campaign takes its toll on hardware and bodies, debilitating the fleet’s fighting power. Think about scrambling an air wing for action every half-hour: you assemble pilots for a preflight briefing, launch, do battle, and recover through “combat landings” that require pilots to slam fuselages on the ship’s flight deck to get the squadron aboard fast. Little maintenance gets done under such circumstances. Machinery needs downtime, and it dislikes transients. Repeatedly starting and stopping it is stressful—even leaving aside the rigors of deep-space combat.

Nor do the equipment’s operators fare much better. “We’re getting slower,” observes Commander Adama grimly after fatigue cascades into computer problems that in turn delay a faster-than-light jump out of harm’s way. The mistake almost subjects not just the battlestar but its consorts—mostly unarmed transports—to Cylon missile fire. Laments the weapons scientist and turncoat Gaius Baltar, “there are limits” beyond which human physiology can’t be pushed. It’s just a matter of time, observes Baltar, before the fleet’s defenders commit a fatal blunder.

And that’s the impact of wearisome tactics on a ship of war that appears amply stocked with manpower. Throughout most of its history, the U.S. Navy manned its ships under a similar philosophy, reasoning that it takes a surplus of manpower to fight a ship in combat. Combat means losses. Now imagine Cylon pinprick attacks’ impact on Galactica and her coterie were it “minimally manned”—that is, if every crewman were assigned multiple jobs, and if the vessels lacked any manpower reserve when (not if) battle damage and casualties occur.

In all likelihood, colonial commanders would have committed a final mistake sooner rather than later, as demands on crews mounted to unbearable proportions. Humanity’s end would have come with it.

This foray into sci-fi represents a roundabout way of proposing that personnel policy may constitute a U.S. Navy center of gravity. Late-model surface vessels—ranging from diminutive littoral combat ships to hulking Zumwalt-class destroyers and Ford-class aircraft carriers—are indeed minimally manned. The logic behind this approach is simple: U.S. defense budgets are stagnant, sailors are expensive. Ergo, substitute technology for people to save taxpayer dollars. The navy doesn’t have to pay, say, an automated firefighting or ammunition-loading system a salary or pension, or fund its health care. The leaner the crew, the greater the savings.

Now, minimal manning may make sense for routine peacetime steaming. Transiting from point A to point B on the nautical chart represents a steady-state environment, entailing predictable demands and few extra stresses to wear down crews. It’s worth noting, though, that every crewman shoulders lots of different duties for different situations—even during everyday operations. That’s true even of ships manned under the traditional, more generous personnel policy. The same sailor might help launch or recover aircraft, take on fuel or supplies from a logistics vessel, fight fires or flooding, and on and on, depending on what the ship’s doing at the time.

Capping the number of crewmen caps the supply of labor. That means automation must reduce the demand for labor enough to keep supply in sync with demand. Can it? Color me skeptical. It’s an open question whether enough shipboard tasks can be automated, wholly or partially, to sustain that balance. I served in a warship operated by half the manpower that operated it in its first life, during World War II. You can indeed reduce manpower by replacing sailors with gee-whiz technology—to a point. It worked for us, but there were times when the makers of Galactica could have cast our crew as characters in “33.” We were the walking dead.