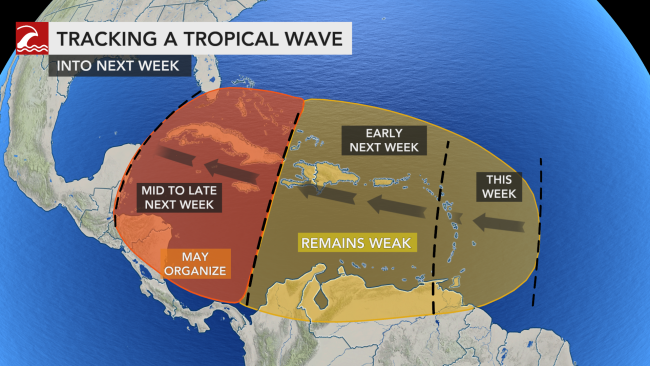 AccuWeather meteorologists are monitoring for a return in tropical development expected to take place as October begins following a pause in tropical activity amid what has been a hyperactive Atlantic hurricane season.

The lull of tropical activity across the basin over the last week or so has been in part thanks to an area of strong wind shear across the center of the Atlantic Ocean. Wind shear, or the change in direction and speed of winds at increasing heights in the atmosphere, is notoriously disruptive to the tropical development process.

However, any tropical wave that is able to survive the disruptive, strong winds could encounter a more favorable environment farther west across the Caribbean. A gyre is expected to develop over Central America, and the setup will help to influence conditions for possible growth of tropical systems in the western Caribbean.

A gyre is a slowly spinning wind pattern that rotates counterclockwise. The spin from the gyre tends to create an area of low pressure, which could become better organized and develop into a tropical system.

“A tropical wave moving into the Western Caribbean along the northern side gyre will help low pressure to form on Friday or this weekend and may become an organized tropical feature by early next week,” AccuWeather’s lead hurricane expert Dan Kottlowski said.

The development of such a feature could take place in the Bay of Honduras as early as late on Friday or Saturday.

“It is possible that any tropical development waits until the feature reaches the western side of the Yucatan Peninsula on Sunday or Monday,” added Kottlowski.

Should this tropical feature reach tropical storm strength, it would be given the name Gamma, becoming only the second “Gamma storm” ever to form in the Atlantic Basin.

If a tropical system develops, it is most likely to continue to drift westward through next week, targeting the Mexico Gulf Coast from Heroica Veracruz to Tampico. However, there is still a small chance that the tropical system could be steered northward toward the United States Gulf Coast. The slower the development, the more likely the tropical system will aim for Mexico.

Whether an organized tropical feature develops or not, the tropical wave and gyre will deliver rounds of heavy rainfall to Belize and the Yucatan Peninsula of Mexico into the weekend, as well as the threat of mudslides in higher elevations. A more westerly track would bring this heavy rain to the Mexico Gulf Coast as well.

The current feature in Caribbean isn’t the only zone that warrants a close watch, according to AccuWeather meteorologists.

A strong tropical wave has been pushing through the dominant wind shear in the middle of the Atlantic Ocean and is forecast to reach the Windward and Leeward Islands on Friday.

“The Lesser Antilles can anticipate tropical downpours and gusty winds Friday and through the weekend as the tropical wave moves into the Caribbean Sea,” Kottlowski said.

With the current gyre in Central America likely to remain in place through next week, this second wave could also become an organized tropical feature during the middle of next week in the northwestern Caribbean.

Residents across the Caribbean, Central America and the Gulf and Atlantic coasts of the United States should be sure not to let their guard down, despite the recent lull in tropical activity.

The month of October, statistically and climatologically, is not as active as September is but can often produce some very impactful tropical systems — and the past 15 years have been no exception.

Hurricane Michael ravaged the Florida Panhandle when it made landfall in Mexico Beach as a Category 5 storm on Oct. 10 of 2018. Just six years prior, Hurricane Sandy pushed through the Caribbean before targeting the northeastern U.S., devastating communities in New York and New Jersey.

In 2005, Hurricane Wilma broke the record for having the lowest barometric pressure of any tropical system ever in the Atlantic Ocean and the second-most intense hurricane ever in Western Hemisphere. Wilma was a Category 5 hurricane at its peak, but it made landfall in Florida on Oct. 24 at Category 3 intensity.

The infamous 2005 Atlantic Basin hurricane season, which spawned not just Wilma but also hurricanes Katrina and Rita, was the only season to reach “Gamma” in the tropical names list. Tropical Storm Gamma formed on Nov. 18, adding to the dozens of earliest-recorded storm records the season produced. However, many of those records have since been replaced by new records set during 2020 tropical season.

AccuWeather meteorologists are forecasting a record-tying 28 named storms this season.

From the start in the spring, AccuWeather long-range meteorologists, led by veteran Kottlowski, stressed that an above-average season was coming. By the middle of the summer, AccuWeather also warned that a hyperactive peak hurricane season was about to unfold.