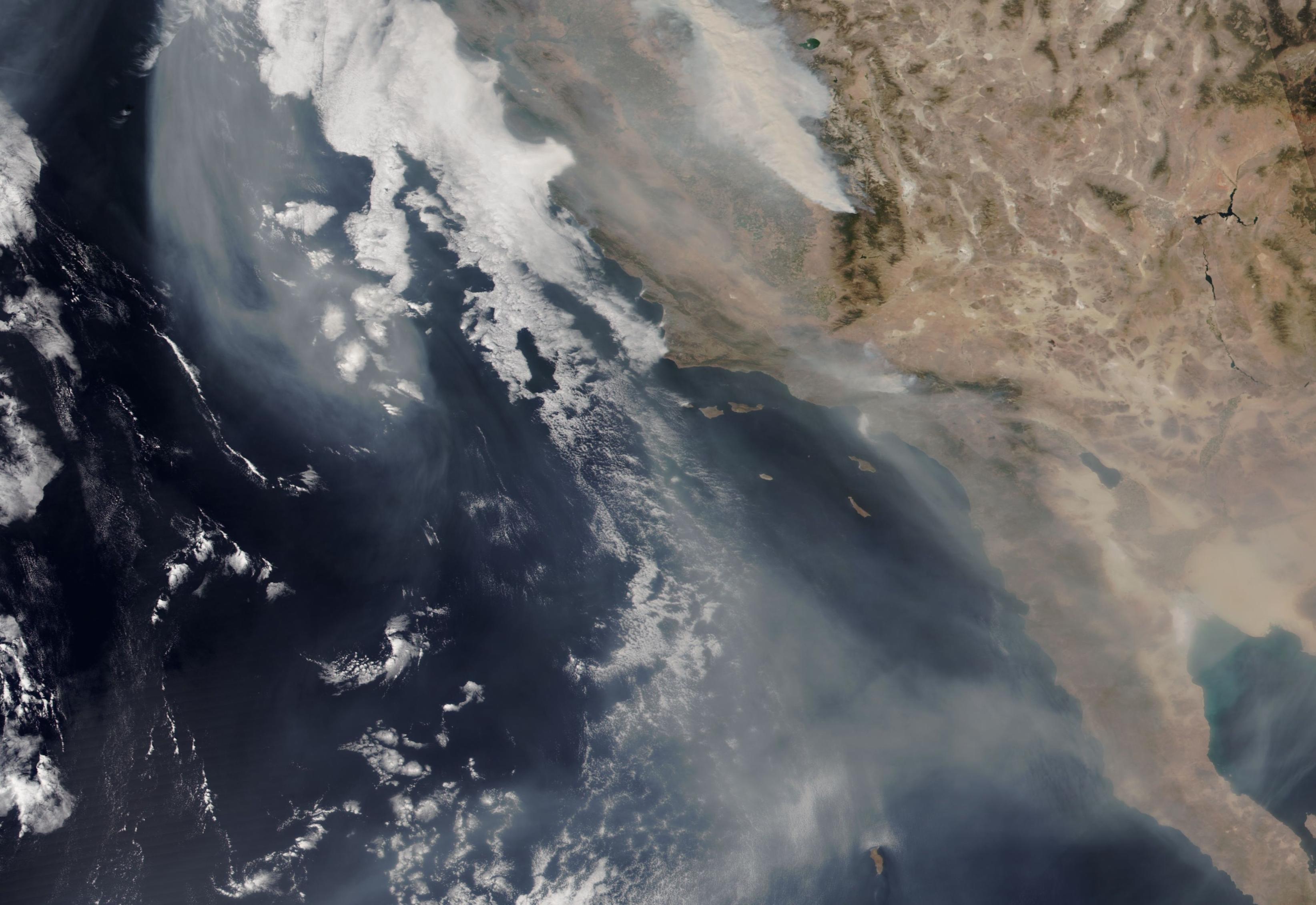 Wildfires are currently raging across hundreds of thousands of acres of the western United States, from Washington state down to California. And the blazes are pumping huge plumes of smoke into the atmosphere that extend across a distance of over 4,000 miles.

Data and imagery collected by satellites—such as the National Oceanic and Atmospheric Administration’s (NOAA) Deep Space Climate Observatory, orbiting nearly a million miles above the Earth—reveals, not surprisingly, that particularly dense areas of wildfire smoke are engulfing all of the west coast states.

But two long bands of smoke from these fires stretch much further inland, reaching as far east as the Great Lakes region—located roughly 2,500 miles away from the west coast—with significant concentrations hovering above several inland states, including Idaho, Montana and Wyoming in the northwest; and Arizona, New Mexico and Texas in the south of the country.

In addition, smoke from the fires has travelled across the northern border, far into the western Canadian provinces of British Columbia, Alberta and Saskatchewan, as well as a chunk of northwestern Mexico, including Baja California.

Two vast bands of smoke are also being being blown westwards, far out into the Pacific Ocean, with the southernmost stretch almost reaching the Hawaiian islands, which lie more than 2,300 miles from the west coast.

You can track the wildfires using a variety of online tools. Perhaps the best one to easily understand the extent of the wildfire smoke is the Environmental Protection Agency’s (EPA) AirNow Fire and Smoke Map, which clearly shows the outline of and density of the plumes using 2D graphics.

The AirNow map also shows how the smoke is affecting air quality across the country. According to the EPA’s Air Quality Index, numerous locations across the west coast are currently experiencing “Unhealthy,” “Very Unhealthy,” or “Hazardous” air.

“Very Unhealthy” means that the risks of these effects are increased for everyone. And “Hazardous” means a “health warning of emergency conditions: everyone is more likely to be affected.”

This AirNow map doesn’t provide real satellite imagery of the smoke, though. So if you would like to see more realistic images of the smoke plumes generated by the fires, check out NASA’s Earth Observing System Data and Information System (EOSDIS) Worldview interactive application, which provides a view of the Earth essentially as it looks now, as well as older snapshots of the planet.

In addition, you can view this loop of satellite imagery created by Penn State’s department of meteorology, as well as an interactive application known as the Satellite Loop Interactive Data Explorer in Real-time (SLIDER) recently developed by the Cooperative Institute for Research in the Atmosphere, using data collected by the NOAA’s GOES-17 satellite. These both feature full-color satellite views of the United States over the past few hours.