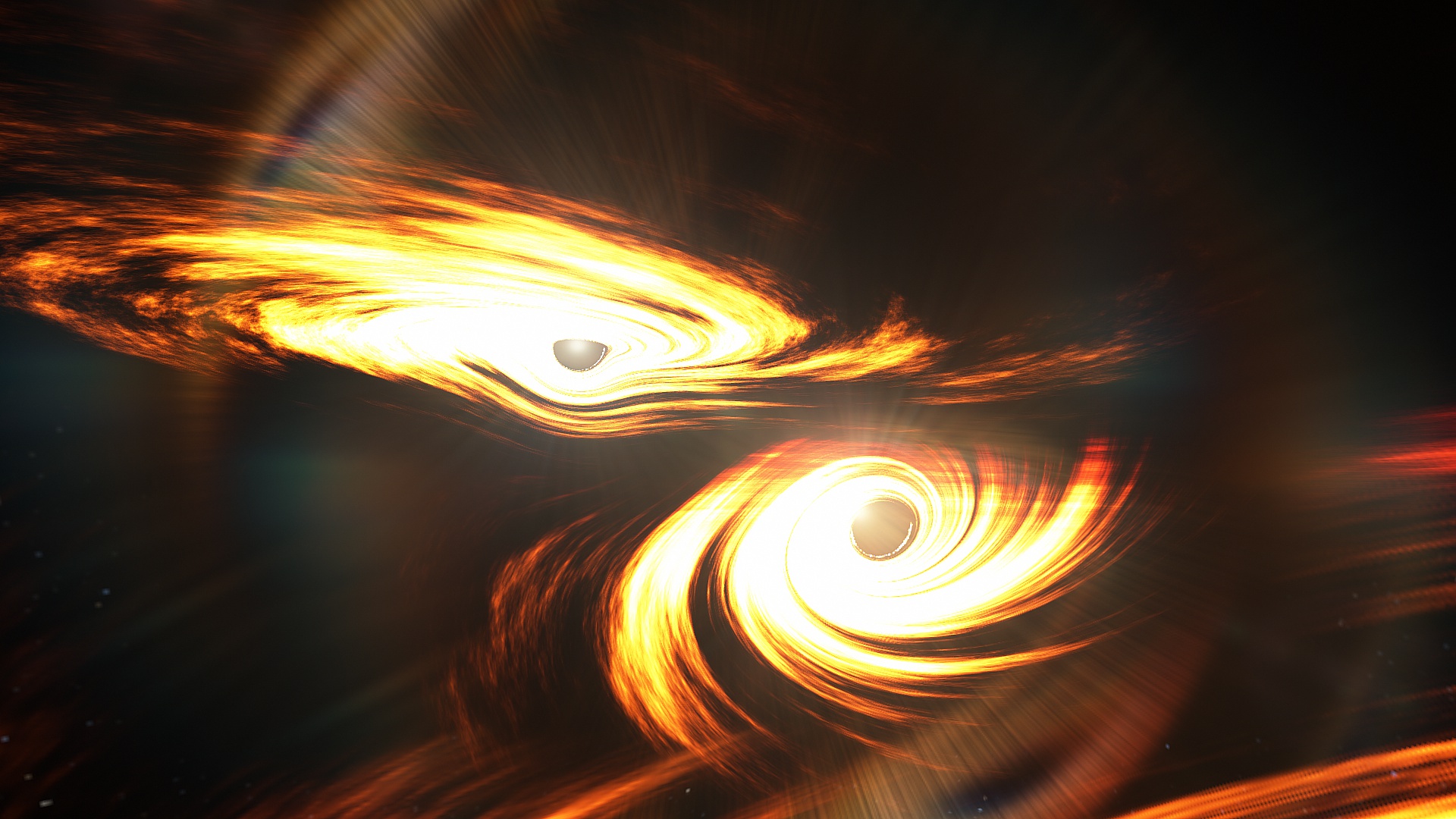 Since 1983 I have been involved in the search for gravitational waves. These waves were a prediction of Albert Einstein in 1916, although he quickly noted that they would be so small and weak that it would be impossible to observe them. It took us a century to detect them directly.

Up until our first detection in 2015 all of us gravitational wave researchers were considered as nice enough, but probably a bit crazy to go after this apparently impossible task. The physics world has changed a lot in the last five years, and in 2019 we made an incredible discovery.

Ever since Galileo turned a telescope to the heavens and shocked the world by seeing moons orbiting Jupiter, new telescopes have always produced surprising discoveries. The same is true with gravitational waves. And while electromagnetic waves — which include radio, optical and gamma rays—let us see the universe, gravitational waves are like a new sense; we hear the universe. So far we are hearing a lot of black holes.

‘I Am a Scientist Working With Severe Cases of COVID-19’

On May 21 last year, three interferometers used to observe this stretching of space as a result of gravitational waves —LIGO (two different detectors) in America and Virgo in Europe—detected a strange signal. I work as part of the team monitoring signals from the French-Italian gravitational wave interferometer, Virgo, so I was excited by this discovery.

Normally our signals are what we call “chirps”—the frequency and amplitude of the signal increase with time. However the signal, which we now call “GW190521”, was more like a bang.

We knew that there was a possibility that the signal was related to the merging of two black holes. Since 2015, we—LIGO and Virgo—have formally announced 15 detections of this stretching of space, and of these, 13 were made by a binary system of two black holes that had then merged together. But of course, we are always looking for other things too: supernovae, pulsars, cosmic strings and ripples from the Big Bang. And we are always on the lookout for the unexpected.

This particular signal was short in time, 0.1 seconds, and low frequency, maxing out at about 60 hertz. We did a rapid inspection of the data and found no reason to think it was noise.

We then sent out an alert to the broader astronomical community, giving them information on the signal, our estimate of where it is in the sky, how far away, and that we thought it might be a binary black hole. These alerts allow for electromagnetic telescopes and neutrino detectors to see if they might find a coincident event.

Then came the hard work. We needed to study and verify this signal before we could publish it formally. First of all, we really needed to convince ourselves that this was a binary black hole merger. The signal was at such a low frequency that we knew that if it were a binary black hole, it must be really massive.

We also had to convince ourselves that it was not something else, like a supernova, a cosmic string, or a really exotic source. Most importantly, we had to be sure that it was not just detector noise. The very short length of the signal was also a challenge. It took us more than a year to carefully examine the signal, and we compared it to the most sophisticated simulated signals from very complex general relativistic studies (studies that analyze gravitational waves using theories of relativity) to be sure.

What we found surprised and excited us, but also induced universal head scratching. As far as we knew at that point, old stars with helium cores in the mass range our signal indicated go through a strange and violent death that leaves behind no black hole. While lighter or heavier stars can collapse to a black hole.

We were able to determine that the two initial black holes that had created this binary black hole had masses of about 66 M⊙ (M⊙ represents solar mass the size of our sun) and 85 M⊙. This created a problem, because our stellar physicist friends tell us that it is impossible for a star to make a black hole with a mass in the 66 M⊙ to 120 M⊙ range—though there is much uncertainty in the size boundaries here.

So the 85 M⊙ black hole became particularly problematic, falling right in the middle of that gap. Scientists have wondered whether this black hole was formed another way. It could be the result of previous black hole mergers; we know that happens, because LIGO and Virgo have already observed this a bunch of times.

Another possibility is that the two black holes we have observed here formed in the Big Bang, and are so called “primordial black holes.” There are many other theories for how to form a 85 M⊙ black hole, but we will need more observations to figure this out.

Another surprise was the mass of the newly formed black hole, which we measured to be 142 M⊙. We have previously observed smaller stellar mass black holes, namely with masses up to a few tens of solar mass. We also know that there are super massive black holes in the center of galaxies, with masses of millions to billions of solar masses. Our galaxy has an enormous black hole of four million M⊙.

We then realized that in detecting this 142 M⊙ black hole, we had witnessed the birth of an “intermediate mass black hole.”

This discovery relates directly to another hot topic in physics: Is there a bridge between stellar mass black holes and super massive black holes? If so, this is where intermediate mass black holes become an important part of the story. These would fall into the range of 100 M⊙ to 100,000 M⊙.

We already have some indirect evidence for some black holes with a few thousand solar masses, but nothing that is slightly smaller—from 100 M⊙ to 1000 M⊙. Now we have seen a black hole with 142 M⊙. So, we have the first data point in what will be a long discussion about whether super massive black holes could be formed by the merger of other black holes.

Another fascinating point is that our calculations also tell us that in this merger 8 M⊙c2 of energy was released as gravitational waves, and these gravitational waves took seven billion years to reach us. Considering that the age of the universe is 13.8 billion years, this means that this merger took place just just before halftime in the universe!

So, how could an event so far away actually move the mirrors in our detectors enough to be measured? It is because so much mass, 8 M⊙, got vaporized and turned into gravitational waves. It is incredible to think that in just five years since our first observation, our work on gravitational waves has enabled us to make another significant discovery.

LIGO and Virgo are now undergoing upgrades, and will recommence with observations in 2022. With an even better sensitivity, more of the universe will be accessible, and even more detections will be made.

However, LIGO and Virgo cannot detect signals below about 20 Hz. More massive systems emit gravitational waves at lower frequencies, so we are probably limited to observations for black hole binaries up to a few hundred solar masses.

Fortunately, we are now designing the next generation of ground based detectors: “Einstein Telescope” in Europe and “Cosmic Explorer” in the United States. These detectors will hopefully be online in the 2030s, and with a 5 Hz lower limit, they should see gravitational waves from binary black hole systems with masses up to a few thousands of solar masses.

Finally, the Laser Interferometer Space Antenna (LISA), a gravitational wave detector in space, is planned for launch in 2034, and should observe systems up to tens of millions of solar masses. With these future observations we should be able to measure black holes across the intermediate mass black hole range, and build that bridge needed to understand black holes from stellar masses up to the super massive.

The future is loud!

Nelson Christensen is a directeur de recherches with the French Centre national de la recherche scientifique, and also the director of the Artemis Laboratory at the Observatoire de la Côte d’Azur, Nice, France. Artemis is a laboratory dedicated to gravitational wave research. In addition he is the George H. and Marjorie F. Dixon professor of physics, emeritus, at Carleton College, Northfield, Minnesota, USA.

All views expressed in this piece are the writer’s own.