Wall Street Week Ahead: A Biden victory could weigh on stock market’s winners 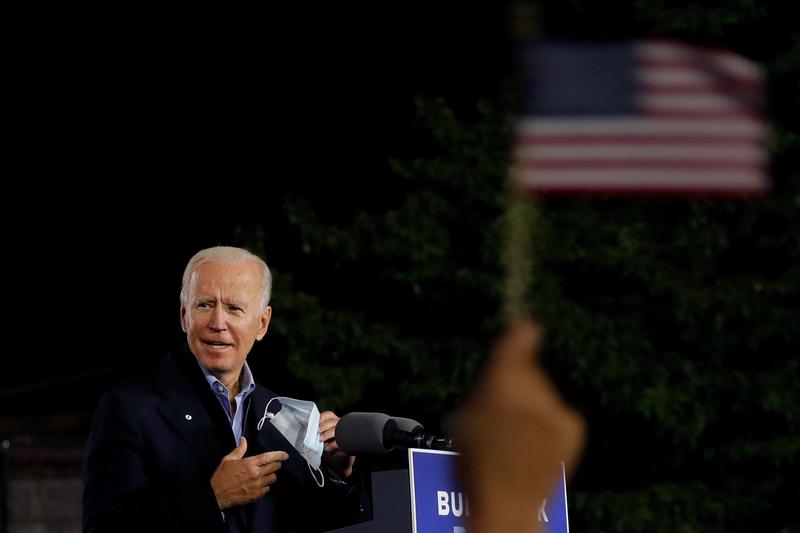 NEW YORK (Reuters) – Investors on Wall Street can add another layer of uncertainty to a market already unnerved by last month’s sell-off, stalled fiscal stimulus, and by President Donald Trump’s COVID-19 diagnosis, which weighed on stocks on Friday.

A higher capital gains tax that could accompany a win by Democratic presidential nominee Joe Biden is also emerging as a potential counterweight to this year’s powerful rally in stocks.

Biden has proposed here taxing capital gains and dividends as ordinary income, which would increase the tax rate from 20% to 39.6% for individuals and couples earning over $1 million, the highest tax bracket.

That policy – which would likely be easier to enact if Democrats also win the Senate and retain control of the House – may push some investors to lock in gains ahead of December if Biden emerges the winner in the Nov. 3 vote, fund managers said.

Tax-motivated selling would likely be most pronounced in technology and other momentum stocks and could push the broad S&P 500 index lower between November and the end of the year, said Eddie Perkin, chief equity investment officer at Eaton Vance.

“If you have enough people looking to harvest gains, that has an impact on the stocks that have led the market, and the big tech stocks could be where people choose to sell at the end of the year,” he said.

On Friday, President Trump’s COVID-19 diagnosis triggered a sell-off in stocks and oil as investors moved away from risk assets. But many tech and momentum stocks are sporting healthy gains for the year despite a sell-off that pushed the S&P 500 down 3.9% in September, its first monthly loss since March.

That kind of momentum may be difficult to slow, especially if it is aided by seasonal trends. November and December tend to be among the best months for stock performance, boasting an average gain of 1.34% and 1.57%, respectively, for the S&P 500, according to research firm CFRA.

“The third quarter is usually weak, but when it is really strong, like it was in 2020, this says the rally isn’t over yet,” explained LPL Financial Chief Market Strategist Ryan Detrick.

Still, some believe a Biden victory would provide a strong incentive for profit-taking.

SELLING ‘AHEAD OF SCHEDULE’

Chris Cordaro, chief investment officer of RegentAtlantic, believes a broad Democratic victory will likely lead to more stock market volatility as soon as the results of the election are known as investors start selling winners.

He has been counseling some clients to move more income into this year as opposed to next year by taking money out of retirement accounts, which would add another layer of selling, he said.

“You’re going to see people selling things that they would be selling anyway, but ahead of schedule,” he said.

Investors in the coming week will be keeping an eye on minutes from the Federal Reserve’s most recent monetary policy meeting, due out Wednesday, for insight on how the central bank views the nascent recovery in the United States.

To be sure, higher taxes do not always lead to increased selling. Overall, the capital gains tax rate could go as high as 40% before having widespread effects on investor behavior and discouraging investment, according to a paper by Princeton University economics professors Owen Zidar and Ole Agersnap.

Personal income tax rates are more likely to affect the market’s winners this year, Cordaro said, while increased corporate taxes would most likely lower valuations across the stock market over the next year.

By 2024, however, enactment of Biden’s proposed tax measures and other policies would cut just 4% off of estimated earnings for the S&P 500 compared with baseline estimates, according to Goldman Sachs.

Increasing corporate taxes while the global economy is still trying to recover from the coronavirus pandemic could dent the rally in the stock market and cut into company plans to hire or invest in new projects by eating into after-tax net income, said

“History teaches us that this is the worst possible moment to subject the economy to the type of massive tax increases that Biden is proposing, especially the changes that would impede capital formation and make domestic job creation less attractive,” he said.