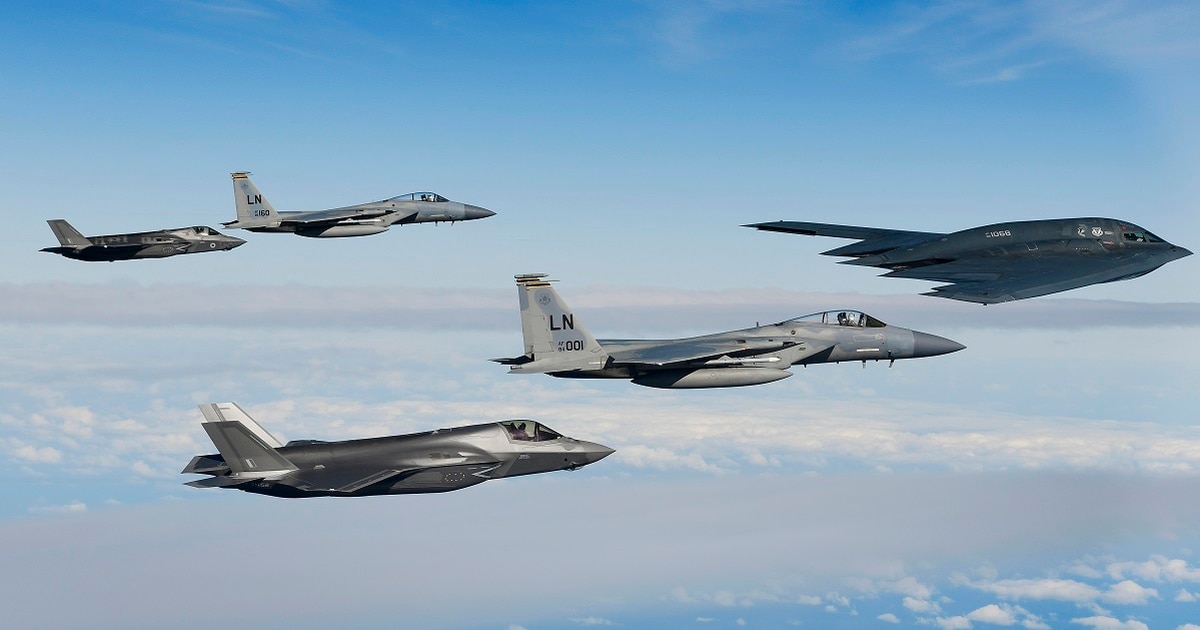 Gen. Jeffrey Harrigian has no shortage of adversaries to watch out for.

As commander of U.S. Air Forces in Europe-Air Forces Africa, Harrigian is responsible for projecting airpower across 104 countries spanning Europe and Africa. That means staying alert and deterring an increasingly assertive Russia — and reassuring allies across Eastern Europe that the United States has their backs.

But it also means working with African allies to strengthen relationships, while working to push back militants and violent extremist organizations threatening partner nations.

All this has to be done while USAFE deals with the COVID-19 pandemic raging across the entire world. Harrigian and his commanders must keep their bases and airmen from suffering a major outbreak of the coronavirus, but at the same time they must also ensure USAFE continues to carry out its missions across Europe and Africa.

In a Sept. 11 interview, Harrigian called this one of USAFE’s greatest accomplishments over the past year. But the coronavirus has also provided one unexpected benefit: It’s helped the command learn how it might have to fight in a major conflict.

USAFE found the right balance for operating during a pandemic by giving individual wing commanders the authority to work out their own strategies on how to lessen the threat, Harrigian said. Different wings operate in different nations, he said, and some locations were in very different stages of the pandemic — particularly Italy, where Aviano Air Base is located.

“That really facilitated a mentality of empowering our commanders to make thoughtful decisions while they collaborated with their host nation partners [and] worked with other joint players that were in their specific areas,” Harrigian said. “And that’s powerful.”

It’s the same mindset — trusting commanders to make the right decisions and empowering their subordinates to do the same — that the Air Force will need in any globally integrated fight, he said.

Former Air Force Chief of Staff Gen. Dave Goldfein in recent years sought to empower lower-level commanders and strengthen squadrons for similar reasons. In the event of a major war, Goldfein said in 2018, smaller units such as squadrons may find themselves cut off from higher Air Force leadership and will need to operate on their own for periods of time, so they must be prepared to make decisions on their own.

Part of USAFE’s strategy has been to adopt a version of the agile combat employment concept, in which units spread out people and aircraft across multiple locations, he said. During war, this is meant to make it harder for an adversary to hit large numbers of U.S. forces, but in a pandemic, spreading operations out can make it easier to socially distance and lessen transmission of the coronavirus.

Gen. Jeffrey Harrigian, commander of U.S. Air Forces in Europe-Air Forces Africa, addresses airmen during an all-call in July 2019 at RAF Mildenhall, England. In a Sept. 11 interview, Harrigian pointed to USAFE’s ability to continue operating during the COVID-19 pandemic as one of its greatest accomplishments over the past year. (Airman 1st Class Brandon Esau/Air Force)

That response also prompted USAFE to be more efficient about using the resources it had and to keep working to find ways to work with partners across the area of responsibility to ensure it is accomplishing its mission while dealing with the pandemic, he said.

Harrigian said USAFE has positioned its forces to be able to operate everywhere from the north of Europe, near the Arctic Circle, to the Baltics, the Black Sea region, the Mediterranean Sea, and into Africa to work with partner nations and pressure violent extremists.

USAFE has also worked to improve its partnerships with friendly nations, Harrigian said. In January, for example, Poland became the ninth member of the European F-35 User’s Group, as well as the first Eastern European nation to join.

At the same time, the Association of African Air Forces — of which Harrigian is co-chairman — has grown to 26 member nations, he said.

Over the next year, Harrigian said he wants to ensure USAFE keeps competing across Europe and Africa.

And in line with Chief of Staff Gen. Charles “CQ” Brown’s recent call for the Air Force to “accelerate change or lose,” USAFE will be looking for more ways to alter and improve how it does things.

“We can’t just rest on our laurels,” Harrigian said. “We have to be able to change and adapt at a speed faster than what our adversaries are doing.”

For example, he said, USAFE will try to find new ways to work with allies in Europe that encourages those partners to contribute to the efforts and improves timely sharing of information.

“It’s important that we continue to look at those capabilities — particularly in theater — that not only we can bring to the table as the United States, but also leveraging our partners in the incredible ideas and capabilities that they also have,” Harrigian said.

USAFE will also continue preparations to bring F-35s to RAF Lakenheath in England, and make it the Air Force’s first international base housing the advanced fighter jet, he said.

But while the Air Force has laid the groundwork to bed-down the F-35, Harrigian said, “we’ve got work to do.”

The first F-35s are expected to arrive at Lakenheath in November 2021. But Defense News, a sister publication to Air Force Times, reported in August that construction of new hangars and facilities for the F-35 are over budget and behind schedule, and several won’t be ready in time.

The Air Force is still facing an overall problem with pilot retention and a roughly 10 percent manning shortfall. But the service has focused on making sure pacing units — combat-coded squadrons that would be called upon first in the event of a major war against a nation like China or Russia — are fully manned.

USAFE is “doing quite well” on pilot manning, Harrigian said, adding that “a certain energy” comes from being deployed overseas and participating in operations.

That energy sustains the force there, he said, but the command must take care of airmen and their families to ensure the service holds on to them. Over the long term, that includes watching how long their tours are, what their next assignments will be, and helping them build a “flight plan” for their future, he said.