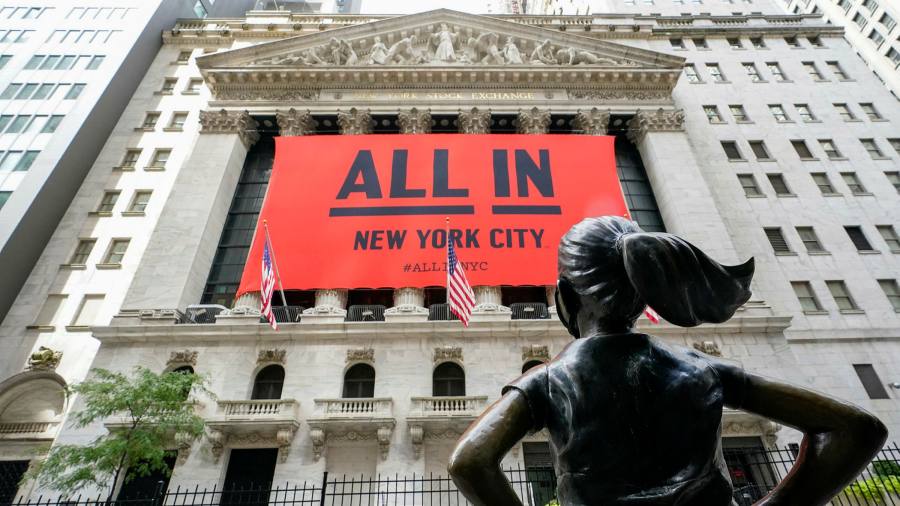 US technology stocks ended the holiday-shortened week on a downbeat note, failing to shake investor scepticism towards the sector’s inflated valuations.

The Nasdaq Composite finished 0.6 per cent lower on Friday and the tech-heavy index sits almost 10 per cent below the all-time high it hit last week. The S&P 500 closed barely changed on the day having been up — and down — as much as 0.9 per cent. Heavyweight index constituents Apple, Amazon, Alphabet and Facebook all fell, extending sell-offs that began last week.

For the week, truncated by the Labor Day public holiday on Monday, the S&P 500 fell 2.5 per cent, on top of a 2.3 per cent decline the week before — its first back-to-back declines since early May. The Nasdaq Composite was down 4.1 per cent this week, its worst since March.

“We had some noise at the top of the market, and it has finally shaken some investor confidence. Tech has blown off some of its froth,” said Todd Jablonski, Principal Portfolio Strategies chief investment officer.

Government bonds, seen as a relatively safe bet in times of market stress, were slightly firmer on Friday. The yield on the benchmark US 10-year Treasury was down 1 basis point at 0.67 per cent, while that on the policy-sensitive two-year was down 2bp at 0.13 per cent.

Concerns about the US recovery grew after a relief package to cushion coronavirus-induced damage was voted down in the Senate on Thursday.

“The events of recent weeks show latent risks remain high,” they said. “This will probably force the hands of various central banks who are likely to reiterate continued economic support on the back of this and may even add to such.”

In Europe, Germany’s Dax closed 0.1 per cent lower and France’s CAC 40 gained 0.2 per cent. In Asia, China’s CSI 300 index of Shanghai and Shenzhen-listed stocks rose 1 per cent while Hong Kong’s Hang Seng and Tokyo’s Topix gained 0.8 per cent and 0.7 per cent, respectively.

The UK pound was down 0.2 per cent against the euro, with one euro buying 93p. Sterling has tumbled more than 3 per cent against the dollar this week after the UK government unveiled plans for legislation that would override key parts of its EU exit agreement, risking the collapse of trade negotiations with Brussels.

“It’s likely this move lower in the pound continues until we find a concrete reason to buy it back,” said Jordan Rochester, foreign exchange strategist at Nomura.

The pound’s sell-off has helped global-facing companies of the FTSE 100, whose exports benefit from a weaker currency. London’s blue-chip index closed 0.3 per cent higher on Friday, taking its increase for the week to 3.5 per cent.

The euro strengthened against the dollar, adding 0.1 per cent to $1.18. The yield on German 10-year Bunds reversed course to slip 5bp to about minus 0.48 per cent, indicating investor demand for the sovereign debt.

Philip Lane, chief economist at the European Central Bank, warned in a blog post on Friday that there was “no room for complacency” on the region’s economic rebound and expressed concern that the stronger euro was holding back inflation.

His comments came a day after remarks from the ECB president, Christine Lagarde, that appeared to open the door to further appreciation for the European single currency.

Oil prices swung between small gains and losses. Brent crude, the international benchmark, was up 0.2 per cent to $39.92 a barrel on Friday.