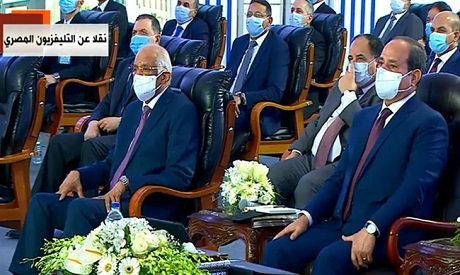 
The president said a different system of attendance in schools will be applied as a preventative measure against COVID-19, explaining that students will go to school only between 2 to 4 days per week. He added that decreasing the ratio of students per class aims at maintaining social distancing.


The president also addressed the issue of rapid population growth in the country, saying the population, which stands at 103 million now, is expected to reach 194 million people by 2050.


To deal with the expected doubling of the population, he said, the state also needs to double its infrastructure projects during the coming 30 years.


“what we have achieved so far was believed to be unachievable, and we did it thanks to God,” the president said.


He also highlighted the importance of technical and professional training and the necessity to maintain a link between scientific research and industry.


He noted that eight modern technological universities are being established as well as 100 government colleges and institutes.


The prime minister added that the state plans to build 40,000 classrooms during the current and coming year.


Minister of Education Tarek Shawki said that a new book on “Values and Respect of Others” will be included in the school curriculum for third graders.


The ministry will also seek, in coordination with the ministry of youth and the relevant body of the armed forces, to make physical education in schools a pass or fail course.


The minister said 75,000 new classes have been established during the last six years, at a total cost of EGP 24 billion.


The ministry plans to distribute 1.8 million tablets to students and will install 36,000 computer screens as well as a new fiber optic network in schools to strengthen the educational experience, Shawki said.


Shawki also explained that the new Thanaweya Amma exam system will allow students to take more than one makeup test for the same subject in order to improve their grades.