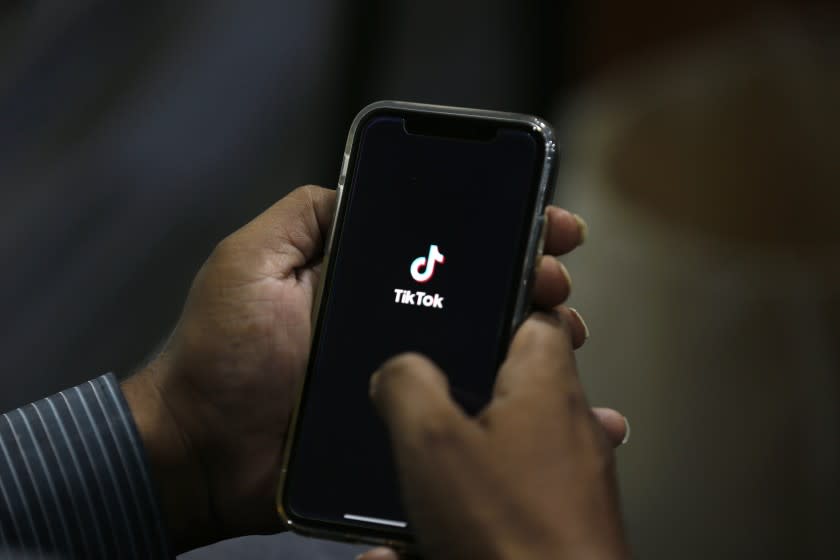 The hits to California’s TikTok workers just keep coming: First, the Trump administration threatened to shutter the company’s U.S. operations; then its CEO quit after just three months on the job.

Now, aspiring TikTok employees without U.S. citizenship in California have been left in the lurch, with government officials apparently holding up approval of worker visas needed to start their jobs.

Engineers hailing from other countries represent an important supply of the tech industry’s labor force, and TikTok, with offices in Silicon Valley and Southern California, is no exception.

Several employees who do not have U.S. citizenship who have already been hired at TikTok at its Silicon Valley campus find themselves facing a lot of uncertainty about their employment.

Some foreign engineers who were recently hired by the popular social video app said they have been unable to collect a paycheck because U.S. Citizenship and Immigration Services had not approved the transfer of temporary work visas from their former employers, or a change in their immigration status.

“I’m in a lot of financial stress right now,” said Liangyue Li, a 31-year-old Chinese software engineer and Bay Area resident who previously worked at Amazon. He was supposed to start his new job at TikTok on Aug. 31, but that was pushed back to Sept. 21 because of delays in securing his visa, he said.

“I really hope this situation gets better,” Li told The Times. “I didn’t expect all of this. Every day there is some new news that makes me worry.”

TikTok sent visa transfer requests for Li and other workers in August through the government’s premium processing service, which typically takes 15 days or less.

But the visa requests have not yet been approved, raising fears among the workers — some of whom have been in the U.S. for years — that they could be forced to uproot their families and return to their home countries.

A 30-year-old Chinese software engineer, who left a San Jose start-up to take a job at TikTok in August, is still waiting for the government to allow him to work at the company under his H-1B visa.

The engineer, who asked not to be identified for fear of jeopardizing his visa status, checks the government’s website daily for updates on his application.

“You can’t stop feeling that as an individual you were caught in the heat of the government pushing a company out of the country,” said the engineer, who has lived in California for about a decade. “As an individual you kind of feel like, ‘OK, I am part of the collateral damage.’ But what can you do?”

TikTok acknowledged in a statement that there have been “unusually lengthy visa transfer processes moving from another employer to TikTok, which does not appear to match the process for those transferring to jobs at other companies in America.”

The company added: “We’re committed to seeing that those who have been offered employment, applied for routine renewal of their work authorization, and resigned from other jobs are able to join us as soon as the government authorizes the transfer.”

U.S. Citizenship and Immigration Services said it does not comment on pending employment-based petitions related to specific employers.

“The agency is committed to adjudicating all petitions, applications and requests fairly, efficiently and effectively on a case-by-case basis to determine if they meet all standards required under applicable law, policies and regulations,” the agency said.

“We haven’t really seen any cases that have exceeded that time frame,” said Brittany Milliasseau, an attorney at Reeves Immigration Law Group.

The visa delays at TikTok come at a time when Silicon Valley business executives have been sharply critical of the Trump administration’s oversight over worker visas that allow foreigners to be legally employed in the U.S.

President Trump in June issued a presidential proclamation banning new H-1B visas, commonly used by foreigners to work in the tech industry, for the rest of the year.

“It’s made coming to the U.S. and coming to Silicon Valley more difficult than ever before,” said Sean Randolph, senior director of the Bay Area Council Economic Institute. “Almost any company here would tell you that they have benefited in very important ways from having access to that kind of creative and innovative talent.”

Many H-1B visa holders end up applying to become permanent residents, with some going on to launch their own companies in the U.S., Randolph said.

“The H-1B is a portal for the flow of many highly talented people where they can contribute to the economy longer term,” Randolph added. “One effect is that they’ll almost certainly discourage applicants who would have otherwise wanted to come to work here.”

Trump has also put pressure on TikTok’s China-based parent company, ByteDance, to sell TikTok’s U.S. operations by Nov. 12, citing national security concerns over whether the company gives information to the Chinese government. TikTok says that it has not and will not share such data and that U.S. user information is stored in Virginia and backed up in Singapore.

Among TikTok’s potential suitors are Microsoft, which is partnering with Walmart on a bid, along with Oracle.

A sale, however, grew more complicated after the Chinese government updated its export rules, requiring China-based companies to get government approval before selling artificial intelligence, which many believe would include TikTok’s algorithm. On Thursday, Trump said he would not offer an extension of his deadline for a sale of TikTok’s U.S. operations.

Trump signed a separate executive order that goes into effect on Sept. 20, which legal experts believe could affect H-1B visa transfers. The order bans ByteDance’s TikTok from transactions with individuals and American companies in the U.S. TikTok has sued the Trump administration to block the order, arguing it is unconstitutional.

He added that H-1B workers with start dates after Sept. 20 could also be at risk. “When your visa is tied to your employment, it creates even bigger issues and immigration authorities may take a hard line against H-1B workers,” he added.

Meanwhile, the visa delays have created hardships for workers.

When Li, a Chinese citizen, left Amazon in April to look for new opportunities, the COVID-19 pandemic was worsening and large tech companies stopped hiring.

“I didn’t expect the pandemic could have such a profound impact on almost every corner of life,” Li said. “The headcount of all the companies shrunk significantly, so I didn’t get a job offer that soon.”

TikTok was one of the few tech companies that was hiring, and Li was excited to work for a fast-growing company. He accepted the offer to be a TikTok software engineer in July and started the process to expedite the transfer of his H-1B visa to TikTok on Aug. 12.

But his visa transfer still has not been approved, leaving him unemployed for more than four months and putting pressure on his savings as he pays $1,500 a month to rent a room in a townhouse in Sunnyvale.

Now, he’s worried about being deported.

“My best hope is that they could approve my H-1B as soon as possible so that I can get at least some protection from the company, given so many uncertainties,” Li said.

An Australian software engineer, who accepted a job offer from TikTok in July after being laid off from a San Francisco tech company, also has been waiting on his visa.

“The situation is getting more and more complicated … this is definitely not sustainable,” said the engineer, who declined to be named to protect his employment prospects. He supports his wife and a 1½-year-old daughter and 2-month-old baby.

Since he was laid off in June, he has struggled to pay his $3,900 rent, in addition to more than $1,000 a month for healthcare for his family.

“We don’t know what’s going to happen,” he said. “So at this moment, I feel more worried than anything else.”