Trump’s first TikTok move: A China quagmire of his own making 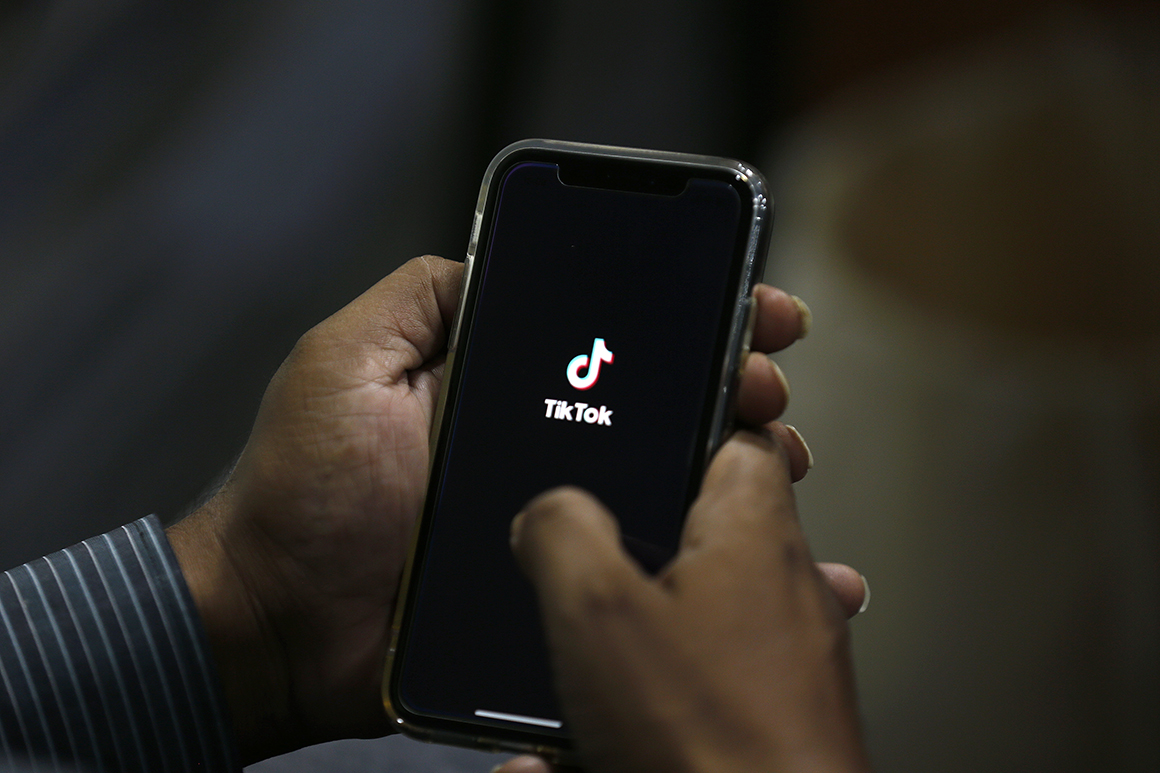 Essentially, Trump has backed himself into a corner. His moves against TikTok are part of a broader tough-on-China push he has made a centerpiece of his reelection campaign, an outlet to deflect blame for mishandling the coronavirus. But each time he has chosen to face off with China — over trade, 5G technology or Hong Kong — he has ended up at a critical moment when he has to find his way out of a jam.

This time around, Trump’s way out isn’t clear. If China delays a TikTok sale — or scuttles the deal altogether — Trump will be forced either to relent with Beijing or to ban the viral video app outright from U.S. soil. If Trump blinks, he risks looking like he caved to Beijing weeks before the election. If Trump follows through with his threats, he risks Chinese retaliation against the U.S. business community, not to mention angering millions of TikTok-loving Americans.

And a deadline looms — Trump asked for a deal to be completed by the week of Sept. 20, and he said on Thursday that he wouldn’t extend the deadline.

“This is an escalatory move,” said Jude Blanchette, a China expert at the foreign policy think tank Center for Strategic and International Studies, referring to China’s recent moves. “If China blocks the deal, then that puts the Trump administration in the position of having to actually follow through with the ban it put on place on TikTok.”

Trump’s August announcement of restrictions on the popular video app, downloaded by over a billion people, marked a new phase in the president’s anti-China crusade, which has become central to his reelection message. Previously, Trump has focused on placing tariffs on China and sanctioning Chinese tech manufacturers. But the campaign against TikTok shows the Trump administration is also willing to target Chinese social media platforms. Officials have also made pledges to go after WeChat, the uber-popular Chinese messaging and payment app.

The pledges have raised concerns in the U.S. business community, with industry leaders saying a crackdown could restrict their business interests in China, the world’s second-largest economy. Barring American companies from working with WeChat, for instance, could deprive major firms of access to a critical commercial platform.

But administration officials insist the national security threats posed by these platforms are too grave to let them operate in the U.S. economic ecosystem without heavy restrictions. The Trump administration claims companies like TikTok and WeChat are simply a vehicle for Chinese government espionage of Americans — though it has offered no proof of these accusations. On TikTok, specifically, the Trump administration has pointed to the application’s ability to “build dossiers of personal information for blackmail, and conduct corporate espionage,” according to the administration’s executive order on TikTok. The company has denied those claims, and the administration has not specifically shown evidence that TikTok improperly used or shared data.

A recent report from the Australian Strategic Policy Institute, an Australian government-funded think tank, found a history of TikTok and WeChat censoring topics considered sensitive in China — a typical feature for content platforms operating in the country. It also noted the Chinese government has leverage over both companies, given the country’s national security laws.

“TikTok has a documented history of censoring free speech to conform to [Chinese Community Party] propaganda,” said a senior administration official. “This administration will not allow the CCP to exploit the private information of U.S. citizens.”

The Commerce Department has not yet clarified the scope of the administration’s orders on TikTok and WeChat, or when potential bans could go into place. And ByteDance is currently negotiating to sell its U.S. TikTok operations with Oracle, and with Microsoft, which is partnering with Walmart on its bid. Microsoft is seen as the top bidder, according to one person familiar with the discussions who spoke on the condition of anonymity.

The person, however, raised concerns about what China’s new export restrictions might mean for a deal. The rule requires companies to get a special license from the Chinese government for the transfer of artificial intelligence technologies, such as algorithms, text analysis and content recommendation — all aspects central to TikTok.

So while TikTok could be a moneymaking prize for any winning bidder, there is unease about the potential political headaches that would come with navigating the deal with the Chinese government. ByteDance is currently trying to get a license from the Chinese government for the sale to either Oracle or Microsoft, complicating the timeline for the deal, the person said.

If the new requirement scuttles a deal, it could force Trump to follow through with an outright ban on TikTok. A person close to discussions, speaking on the condition of anonymity, said the U.S. government will be ready with other options for the president if a deal is not reached by his deadline, without offering specifics. The Wall Street Journal’s report said even if there is not a full sale, the U.S. is exploring a potential restructuring of TikTok. If Trump chooses to ban TikTok outright, the process could be delayed by the lawsuit the company has filed.

“The Trump administration may have overshot the landing here because it thinks leverage over the U.S. markets is so strong it can set the terms for decoupling actions, but China is trying to show they have significant leverage as well,” Blanchette said.

The Trump administration has invested considerable energy in its tough-on-China campaign as election season ramps up. Since the beginning of the year, the administration has sanctioned some Chinese officials over Beijing’s treatment of the Uighur minority group, its militarized building in the South China Sea and its crackdown on pro-democracy efforts in Hong Kong. More recently, Trump has been chiding Beijing over its handling of the coronavirus, which he derides as the “China virus,” shuttered a Chinese consulate in Houston and restricted Chinese diplomats in America.

The crackdown has caused consternation in the business community. Industry leaders have expressed fears over losing access to China’s rapidly growing market and large population, and are still smarting over Trump’s trade war with China, during which involved he slapped steep tariffs on numerous products. A U.S.-China Business Council survey found 86 percent of its member companies said bilateral trade tensions have negatively affected business with China.

And while TikTok’s high-profile American users are young liberals — including the group that requested thousands of tickets to a Trump rally, hoping to troll the campaign and drive down attendance — there are still many conservative users on the platform whom Trump may alienate with a full ban.

“The gains are all difficult to grasp right now and the loss is really obvious,” said Derek Scissors, a China policy expert at the conservative American Enterprise Institute. “As a result, China might think the president might change his mind, but I don’t know how the president would get away with backing down here.”

Technology news from Washington and Silicon Valley — weekday mornings, in your inbox.

Essentially, he said, China has “raised the odds of TikTok in the U.S. just dying.”

“President Trump is the first one to hold China accountable for their cheating on trade, and has also pinpointed them as the source of the coronavirus outbreak which lied about it and put the entire world behind the curve on responding,” Trump campaign communications director Tim Murtaugh said in a statement. “To this day, Joe Biden doesn’t view China as an economic threat. Joe Biden has a China problem and it is a major issue in the campaign.”

Biden, for his part, has knocked Trump for consistently downplaying China’s human rights abuses, referred to Chinese President Xi Jinping as a “thug” and vowed to strengthen alliances so the U.S. can present a united front and counter Beijing.

The Trump administration has shown few signs it plans to back down on its efforts to ban TikTok if no American buyer is found. White House chief of staff Mark Meadows and trade adviser Peter Navarro both even said the administration plans to crack down on more Chinese companies, though they did not state which might be targeted.

“It is critical that this country not use apps that are made in China, or that can take our data and go to servers in China. That data will be used to surveil, monitor and track you,” Navarro said last week on Fox Business. “That’s the policy position underlying why we have gone after TikTok and WeChat, and there will be others because China is basically going out around the world trying to acquire technology and influence.”

A second senior administration said the White House is committed to policing any tech platform that can be manipulated to suppress speech and abuse its users.

“Where we find efforts to harvest and surveil intimate data, and use that to intimidate and coerce people in our country or their relatives back in China, we are going to take step — in some cases aggressive steps like you saw against TikTok and WeChat — to protect freedom of thought as well as freedom of speech in the United States,” the official said in a call with reporters Friday.

“At the end of the day,” the official added, “the data we produce in this day and age is roughly equivalent to our thoughts. So what you have is a modern day crystallization of the thought police that George Orwell wrote about in his novel, ‘1984.’”