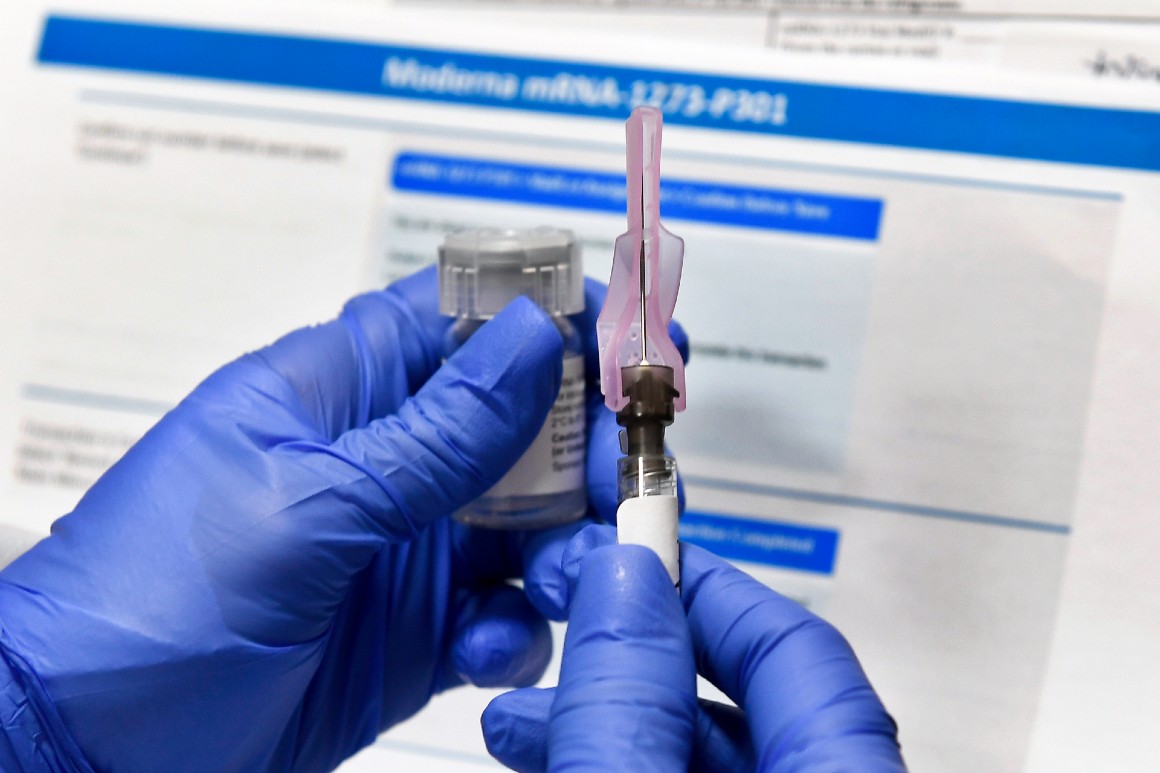 The so-called Vaccine Administration Management System is the latest big health data project the administration has launched and follows this summer’s bungled rollout of a new system to track hospital coronavirus cases that displaced a system long used by states and the CDC. The vaccine system is being developed by Deloitte using technology from Salesforce and has been tested in a series of pilot projects in four states over the summer.

The CDC says it expects an initial version of the software to be available next month. That worries states who aren’t yet sure whether they’ll need to use the new system or be able to enhance their existing ones in time. The administration also hasn’t yet specified exactly what information will have to be entered as vaccinations begin.

The federal government is telling states to be ready to administer multiple prospective Covid-19 vaccines, most requiring two shots at different times, in the coming months.

Choreographing that many vaccinations poses a huge logistical challenge. At the heart of the job is software to track in real time if vaccines are working or producing adverse effects; to prevent patients from accidentally receiving two different vaccines; and to verify identities and ensure the shots go to health workers and others designated at the front of the line.

The states’ existing vaccine-trackers, which have been fine-tuned over decades, could handle some of that work. Local health clinics are already familiar with the technology and could, in theory, be able to use the systems for any coronavirus shot that’s developed, the way they do for tetanus, polio, chickenpox and other common vaccines.

But officials acknowledge that some new or under-resourced health clinics may not yet be linked to these systems. And states are concerned about whether the federal government will seek tough new data reporting requirements that will essentially force them to use the new software. The CDC confirmed it’s seeking one contentious category of information: “identifiable” data tracking specific individuals, which experts say is legally tricky to comply with.

Federal officials may want to examine a vast breadth of data to track vaccination efforts, such as information on race and occupation, which current state systems don’t have.

CDC said it’s requiring the data that’s collected to be sent to a secure database, to weed out duplicate reports. After that, it will then be reported without identifying information to the government. Coyle says registries can perform the same functions already.

Health care providers who may use the new federal vaccine system haven’t yet had the chance to preview it, according to several lobbyists and trade groups.

“They have not talked to the health systems at all about it,” said Janis Orlowski, the chief health care officer at the Association of American Medical Colleges.

Letting end-users test such systems is a basic checklist item in health software development, to reduce the odds of unwelcome surprises when an actual system is rolled out. The CDC says training sessions are in the works, and that state immunization programs could have joined calls earlier this month to walk through the program.

“What CDC is looking to do with the [new system] is to provide a tool that would allow that data capture, allow scheduling, things that wouldn’t ordinarily be the state’s responsibility,” said Claire Hannan, the executive director of the Association of Immunization Managers.

“The reporting requirements are steep, and if our providers can’t meet those, then they can’t provide the vaccine,” said Kris Ehresmann, the Minnesota Department of Health’s infectious disease director.

Staff in Minnesota’s public health department have seen partial demonstrations of the new technology but “haven’t been able to pilot or play with so we don’t know if it will meet our … needs,” Ehresmann said.

There may not be much time to figure that out. States must submit their vaccination plans to the CDC by next month, and the Trump administration has told governors they should get ready for coronavirus vaccine distribution by Nov. 1. Coyle said the new data system is expected to roll out Oct. 1— after officials originally set an Oct. 20 target date.

The uncertainty is leaving states stuck between deciding whether to enhance their own IT systems in the hopes they’ll pass muster or to go with the federal one, with only vague assurances it will help meet vaccine scheduling and supply needs.

“The data piece is big,” Hannan said. “If you’re going to make changes to make sure you’re collecting the right information, those take some time, and you may have to be hiring a contractor or a vendor to make those changes.”

“The importance of the data cannot be understated,” said Adriane Casalotti, chief of government affairs for the National Association of County and City Health Officials. “If local health departments don’t have access to that data in as near real-time as possible, you’re not going to be able to really use it to make changes to ensure that we’re getting the vaccine to who needs it.”

CDC, in a statement, said that there are “inconsistent and disparate capabilities” among the states and that some systems require modernization to support increased reporting, especially to receive data in real-time. The agency added that data collected through the new system will flow back into existing state vaccine databases, and that it’s being built “given the accelerated timeline needed to implement a national, coordinated vaccine tracking approach.”

“We believe it’s very important for us to have end-to-end vaccine tracking and dose-level accountability,” Nancy Messonnier, director of CDC’s Center for the National Center for Immunization and Respiratory Diseases, said in July. “That data is crucial to allow flexibility in targeting, in allocation, in ordering, in vaccine management.”

Federal officials outlined gaps in the existing system in a slide deck, including some state systems’ inability to communicate with each other. In addition to the new reporting system, CDC is planning for states’ and providers’ information to be fed into a central hub, known as the Immunization Gateway, with the goal of having up-to-date information on coronavirus immunization.

But the schedule is daunting if states want to receive real-time data. Onboarding states’ current immunization systems to the central hub “may not be feasible for every jurisdiction” before the country begins vaccinating the first group of people, the CDC said in a statement. “In these cases, data will be provided to [the state systems] as quickly as possible.”

Health information officials are concerned about patient-matching, a phenomenon in which patients with the similar names are mistaken with one another. Poor quality information has bedeviled the health care system since the beginning of the pandemic. Shaun Grannis, vice president of data and analytics at the Regenstrief Institute, said while the CDC team is serious about addressing the issue, it’s nevertheless a concern. The agency says its system “facilitates” pre-identification of eligible patients by an organization or employer.

For all that promise, though, states are facing a set of looming deadlines without a clear sense of their options.

“More and more states are unsure of how to proceed,” Coyle said. “This is one of the biggest contributors to my increased Tums consumption.”

Dan Goldberg contributed to this report.