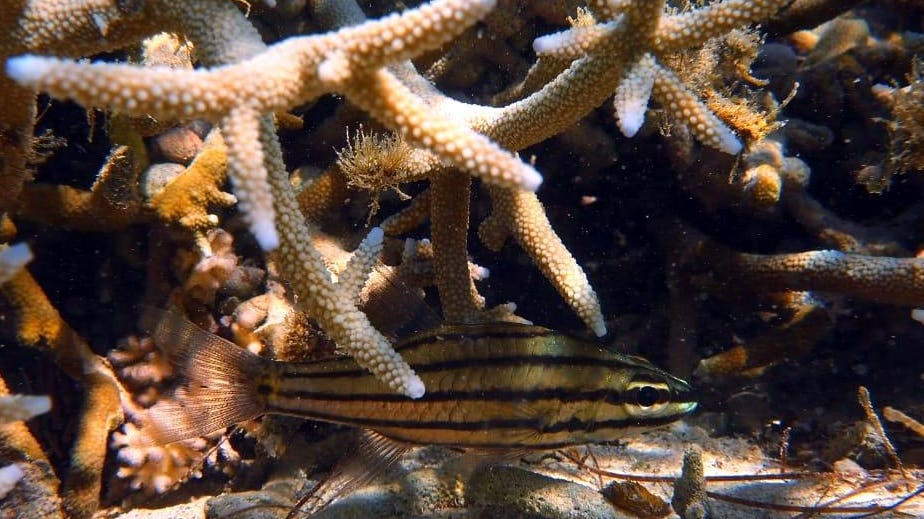 The true scale of the devastating Wakashio oil spill is only just becoming apparent to the Indian Ocean island of Mauritius.

Local environmental NGO, Reef to Roots, were at the location of Ilot Brocus, a protected coral atoll, when they noticed how many sea creatures had died.

The videos, that have been widely circulated by local news in Mauritius since Monday September 28, describe the scene at low tide between the beach of Le Bouchon and Ilot Brocus the weekend prior.

Jose Berchand, Vice President of Reef to Roots explains what he saw. “At low tide between Le Bouchon beach and Ilot Brocus, there is a terrible smell. There are many sea creatures that we have found dead in the lagoon. There are many dead sea snakes, many dead eels, dead Madagascan Mud Crabs (Crabe Malgaches), dead octopus, a lot of dead fish and a really high number of dead shell creatures. You can see that they are dead within their shells.”

In the video (shown above), he also explains the smell of oil around the coral atoll, and traces of the thin oil film that can be seen floating on the surface.

The samples of the residue and dead sea creatures were taken away for analysis by the Government of Mauritius.

A coastline that was vibrant with marine life

This part of Mauritius had beaches that are usually full of cone snails, hermit crabs, sea urchins, starfish, sea cucumbers and other shell fish. The most vibrant corals and sponges of Mauritius grew in this region, and they had been more resilient to bleaching that impacted reefs in different areas of the world.

The Southern Eastern part of the coastline of Mauritius is known for being the most unspoilt and protected from the effects of large scale tourism in Mauritius, and was an important site for scientific study.

It contains some of the greatest coastal and marine biodiversity in Mauritius due to its isolation from the more touristic areas of the North. Whales migrating from Antarctica can often be seen off the South coast of Mauritius from there.

The beaches are important breeding grounds of endangered Green Turtles, which had seen a strong resurgence in recent years after decades of strong protection. Some of the towns in the South of the island had been named after these famous saltwater and freshwater eels, such as Riviere-des-Anguilles, which were now found dead around Ilot Brocus.

Speaking about the dead sea creatures he saw around Ilot Brocus, Jose Berchand says, “It is not natural. The eels, fish and sea creatures could not have died at this point from natural causes.”

A new feature by Mauritian production company, Land of the Lost Dodo, highlights some of the other challenges the Wakashio oil spill has been having on the coral reefs of Mauritius.

The feature shows the various efforts being made to regrow coral and try preserve the unique genetic diversity of local Mauritian corals, that form a crucial part of an underwater chain of corals stretching 1000 miles from volcanic Reunion island all the way to the Seychelles.

It is this area that had been under consideration by UNESCO to become a World Heritage Marine Site.

So given the dead sea creatures around Ilot Brocus, questions are being asked about what the scientists sent by Japan had been doing in this region? Had the fishermen and dive centers of Mauritius been mobilized to collect biological samples from the 125 square kilometers of Mauritian lagoons that had been cordoned off? Why not?

The currents and wind patterns are very well understood for the fishermen, tourist boat operators and kite surf instructors, many of whom have lived in the region for generations.

By diverting attention to a few small locations in the mangroves, using manual techniques from 30 years ago, the entire science effort in Mauritius is being undermined.

Technologies like Saildrone could have been patrolling Mauritius’ coastline and providing near real-time biological baseline surveys by now and collecting 1.6 million times more data points than the current techniques being put forward by the scientists sent by the Government of Japan.

Were the scientists sent by Japan deliberately undermining the scientific efforts of Mauritius and other nations that had offered support to the oil spill response?

Why were the latest scientific techniques and technologies not being deployed? The region of the oil spill is a global biodiversity hotspot, with many endangered species now at risk of extinction due to the poorly managed salvage and oil spill response.

It is notable that whereas 60 world leaders signed a pledge at the United Nations on September 28 to protect the world’s biodiversity, Japan’s Prime Minister did not.

Neither did the current Prime Minister of Mauritius.

The mysterious case of the missing oil fingerprinting

This is why the oil fingerprinting was so critical.

Without the oil fingerprinting, it would be challenging to link the oil from the Wakashio to the oil being found on Le Bouchon, and to understand what the effects of the oil is on marine life.

MORE FROM FORBESOil From Wakashio Found In Mauritius: Where Is The Oil Fingerprinting?By Nishan Degnarain

It is clear that this type of oil is more toxic than most, by having such a devastating impact on marine life.

Over 50 whales and dolphins turned up dead around Mauritius within days of the oil spill and the controversial sinking of the front section of the Wakashio.

MORE FROM FORBESToxic In The Tropics: The Invisible Killer Now In Mauritian Waters After Major Heavy Oil SpillBy Nishan Degnarain

This ship oil is clearly not the safe ‘skin cream’ that the IMO representative had claimed to the Mauritian public in August.

Not having conducted the oil fingerprinting is not a small oversight but a major omission.

With the IMO, ITOPF, Japan P&I Club, Panama Maritime Authority, ship operator Mitsui OSK and the shipowners, Nagashiki Shipping, all on the ground since August 12, and no clear oil fingerprinting having been released, the credibility and motivation of all these organizations are now being called into question.

They were supposed to bring international oil spill expertise to Mauritius.

What is really going on?