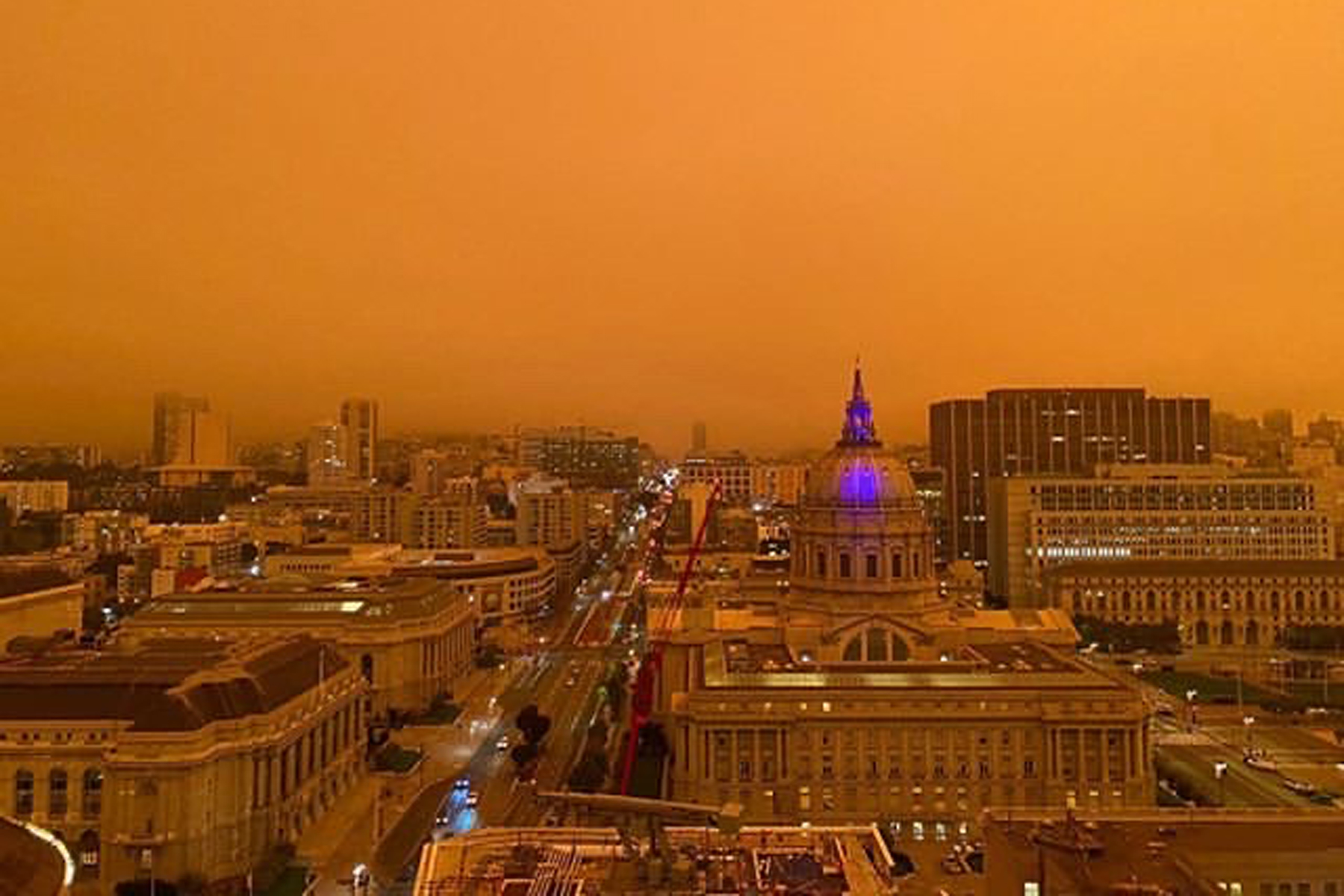 With wildfire smoke high aloft in the atmosphere, the sky was a sickly yellow on Tuesday, but today a thicker blanket of toxic air is traveling overhead and the color turned an even stranger, richer hue.

The sun’s rays struggled to penetrate the smoke, and at 10:45 a.m., it looked as if it were dawn.

“Extremely dense & tall smoke plumes from numerous large wildfires, some of which have been generating nocturnal pyrocumulunimbus clouds (‘fire thunderstorms), are almost completely blocking out the sun across some portions of Northern California this morning,” UCLA climate scientist Daniel Swain shared on Twitter. 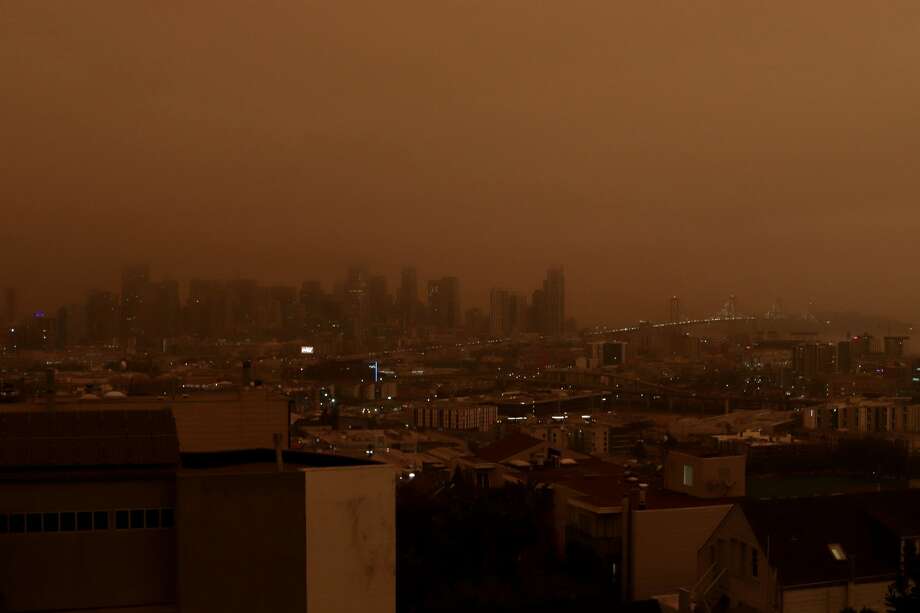 “They reported a significant amount of ash,” said Gass. “Almost to the point where it looked like moderate to heavy snow.”

But while the toxic haze in the East Bay settled close to the surface, across most of the Bay Area the smoke was high in the atmosphere with the air quality ranging from good to moderate on the ground.

Because the fires are farther away from the Bay Area, the smoke is getting lofted high into the atmosphere, Gass explained. The mass of polluted air hovered above a marine layer in the early morning that pushed inland from the Pacific Ocean overnight.

“That’s the reason it doesn’t smell smoky but the sky is a different color,” Gass said.

Jan Null, who runs a private forecasting service called Golden Gate Weather Services, added that the marine inversion layer acts as a barrier. “That’s why air quality isn’t too bad this morning,” Null said. “The smoke is not able to mix down through the inversion. The smoke is also sort of traveling past us.” National Weather Service forecaster Brian Garcia said he has never seen anything like the dystopian skies over the greater Bay Area on Wednesday.

“This is not a common sight because this takes very specific conditions in order for this to happen,” explained Garcia, who works at the NWS Bay Area office in Monterey. “Obviously, you need fires that have ample smoke production. Then you need wind to bring that smoke in over the Bay Area.”

Strong northerly winds are injecting smoke from wildfires in Northern California into the upper levels of the atmosphere and pushing it south to the Bay Area.

“The wind at those higher levels have been just the right strength and in the perfect direction to push the smoke over the Bay Area,” he explained. “The winds are even weakening a little over the Bay Area and we’re just seeing the smoke set up shop here. It’s not moving out of the Bay Area as fast as it’s coming in. Those concentrations in those mid- to upper-levels are becoming more dense with smoke concentrations. What that gives us is a day like we’re seeing today.”

It’s difficult to track exactly where the smoke is coming from, but Garcia said the August Complex in Mendocino County and the North Complex east of Chico are generating copious amounts of smoke. 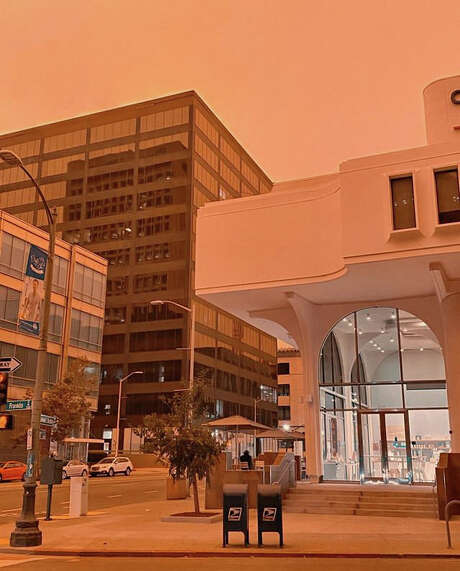 Fires are also burning across Oregon. Gov. Kate Brown declared a statewide emergency Tuesday as conflagrations grew rapidly in Marion, Lane, Jackson, Coos, Lincoln, Washington and Clackamas counties. With the current wind pattern, smoke from Oregon is being swept over the Pacific Ocean, with some of it blowing back into Northern California but most of it landing in Southern California. 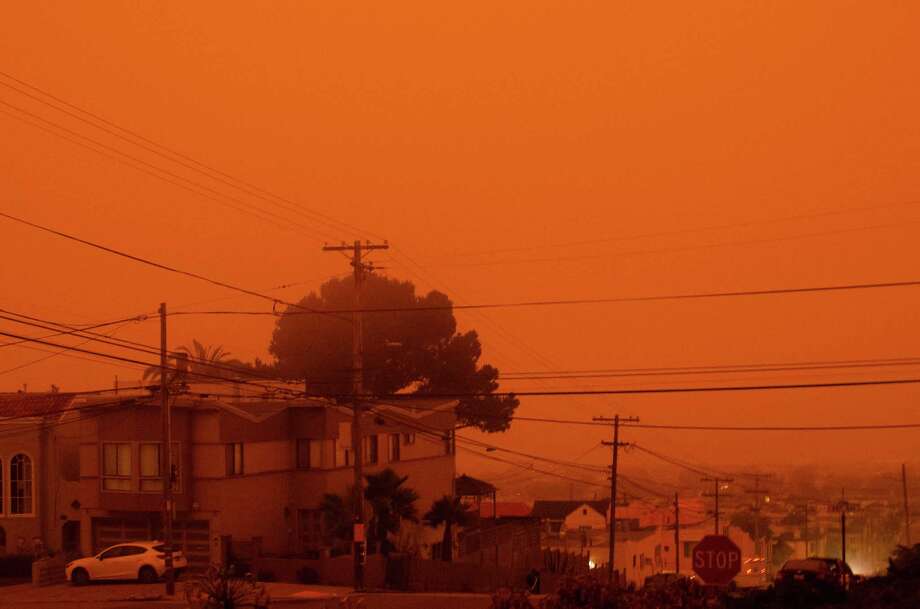 The orange sky above the Sunset District in San Francisco around 9 am on Sept. 9, 2020.

Tuesday and Wednesday’s conditions are different from recent weeks when smoke from nearby blazes, located directly within the boundaries of the Bay Area, traveled low in the atmosphere, nearly hugging the ground. The Bay Area smelled like a campfire for weeks. 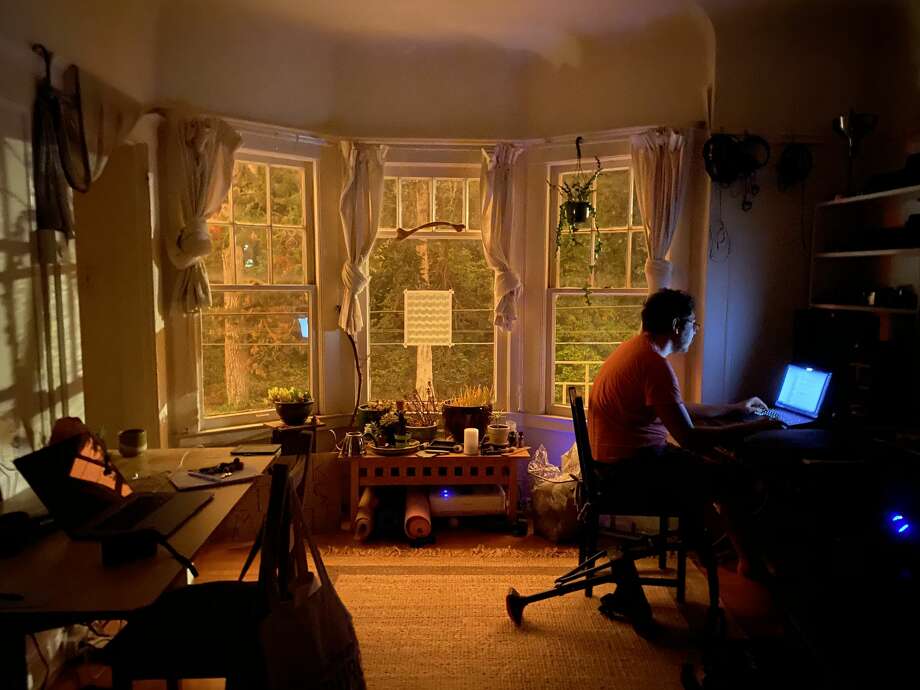 At 8:50 in the morning Alexander Gregor gears up for working from home  with very little light on Sept. 9, 2020.

At 8:50 in the morning Alexander Gregor gears up for working from…

It’s hard to pin down the air quality forecast for Wednesday, but with the northerly winds aloft expected to lighten, gravity could take over as the primary vertical transport of the smoke and smoke could descend closer to the surface through the day, leading to darker skies and worsening air quality, according to the NWS.

By nightfall, the smoke may lighten and disperse.

“We will see the winds shift, instead of pulling the smoke in from the north toward the south, we’ll start to see the wind pushing from the south to the north,” said Garcia.  That’s only in certain layers of the atmosphere. This will help thin the concentration, but we will still see smoke lingering around in different layers in the atmosphere.” 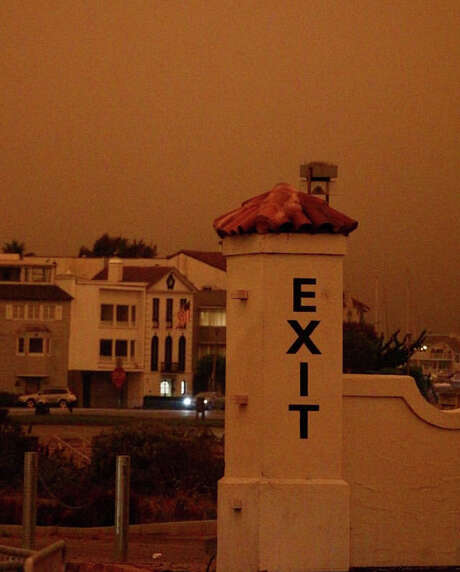 Typically, a strong onshore wind would pick up in the afternoon, blowing smoke from the coast into inland valleys, but Garcia said due to the heavy smoke pushing temperatures down, a sea breeze is unlikely to develop.

“When we have heat inland, it helps draw in the sea breeze from the ocean,” he said.

Garcia added even if coastal winds begin to blow, they will be traveling near the ground and would unlikely impact smoke in the upper atmosphere.

Bay Area Air Quality Management District spokesperson Aaron Richardson said the air-quality forecast is for unhealthy levels in the North Bay and parts of the East Bay this afternoon with deteriorating conditions off and on throughout the entire region.

“With all these fires burning it’s hard to know what the impacts will be,” Richardson said.

The Air Quality District has a Spare the Air Alert in effect through Friday, Sept. 11, which makes it illegal to burn wood or wood products.

Amy Graff is the news editor for SFGATE. Email her: agraff@sfgate.com.