The tech you’ll want when you buy a new car

What do automotive shoppers really want?

A few years ago, those who kicked the tires on new vehicles might have prioritized fuel efficiency, comfort, or perhaps horsepower.

Today, it’s all about the tech.

“The race never ends to develop ‘must have’ vehicle technologies,” says Kristin Kolodge, executive director of driver interaction and human machine interface research at J.D. Power. “New technology continues to be a primary factor in the vehicle purchase decision.”

“However, it’s critical for automakers to offer features that owners find intuitive and reliable,” Kolodge adds.

Automotive expert Nik Miles mirrors Kolodge’s assessment: “Besides price, tech plays a major role when considering a new car – interestingly, for every age group – but it has to be easy to use.”

Miles is founder and host of OurAutoExpert.com, an online magazine featuring the latest in automotive news and reviews. “Even inexpensive vehicles are loaded with tech, whether it’s tech you see, such as cutting-edge infotainment systems, or tech you don’t see that keeps drivers safe,” Miles adds.

The following is a quick look at a few promising teched-out vehicles this fall, and some gadgets you can add to any vehicle, as well.

Starting at $32,470, this new two-row crossover SUV features Toyota Safety Sense 2.5, a comprehensive suite of active safety systems that includes a pre-collision system with advanced pedestrian and bicyclist detection; road sign assist, which actively scans the sides of the road to detect select road signs and displays them on the dashboard; and emergency steering assist, which could help drivers avoid a pedestrian or other object in their lane.

The 2021 Toyota Venza also features lane departure alert, lane tracing assist, and dynamic cruise control (which allows the vehicle to maintain a preset distance from the one ahead).

In a first for the company, the vehicle supports an optional Star Gaze fixed panoramic moonroof. Similar to some airplanes that use this technology to block outside light (instead of a manual window shade), this is electrochromic glass that allows drivers to switch from transparent to frosted modes with the push of a button. This is a $1,400 option on the LTD grade of the vehicle (which also includes a 12.3-inch touchscreen). 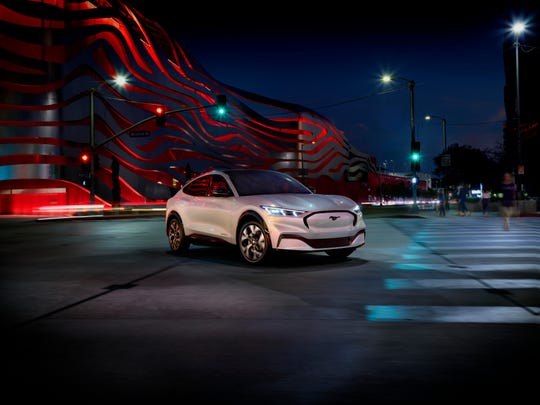 For the first time in 55 years, Ford is expanding its Mustang lineup, with another first, an all-electric Mustang, called the Mach-E. It’s a four-door SUV with fast pick-up and up to 300 miles of range between charges. (Photo: Ford Motor Company)

Speaking of firsts, Ford is expanding its Mustang lineup for the first time in 55 years, with an all-electric model.

The Mach-E (from $44,995) is a four-door SUV that has similar hallmarks of the company’s iconic muscle car – in its design and performance – and can go from 0 to 60 in about three and a half seconds for the GT Performance Edition package (about $60,000).

But aside from a ton of power and torque, this electric vehicle (EV) crossover has an estimated range of at least 300 miles, with the available extended-range battery and rear-wheel drive. It can route customers to nearby public charging stations and will provide access to more than 12,500 public charge stations in the FordPass charging network.

Preorders are well underway, and the vehicle will start hitting the streets near the end of the year, says the company. 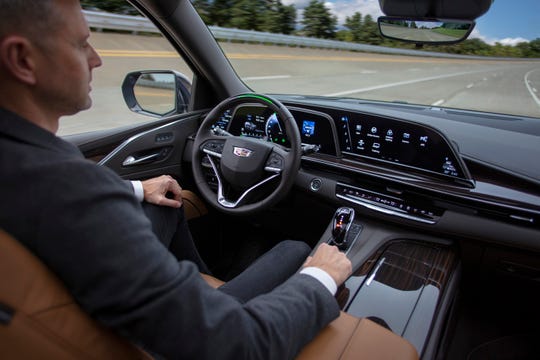 Cadillac’s Super Cruise technology gets revamped in the 2021 Cadillac Escalade, out this year, including automatic lane changes, and more. Unlike Tesla’s Autopilot, you don’t need your hands on the wheel but need to be looking at the road. (Photo: Jim Frenak-FPI Studios / General Motors)

When it comes to semi-autonomous driving aids, the 2021 Cadillac Escalade (from $77,490) features an enhanced Super Cruise system, which now includes “lane change on-demand,” allowing drivers to direct the system to perform a single lane change using the turn signal to indicate the desired direction of the move.

Speaking of lanes, an enhancement to “dynamic lane offset” means the Escalade can be nudged slightly into its lane when other vehicles are passing very closely.

When activated on supported freeways and highways, Super Cruise uses a series of lidar-generated maps, high-precision GPS, cameras and radar sensors to monitor the road, as well as a system to ensure the driver is paying attention. That is, unlike Tesla’s Autopilot, those who activate Cadillac’s Super Cruise on the 2021 Escalade (or CT6 sedan) do not need to have their hands on the wheel, but their eyes must remain fixed on the road ahead. 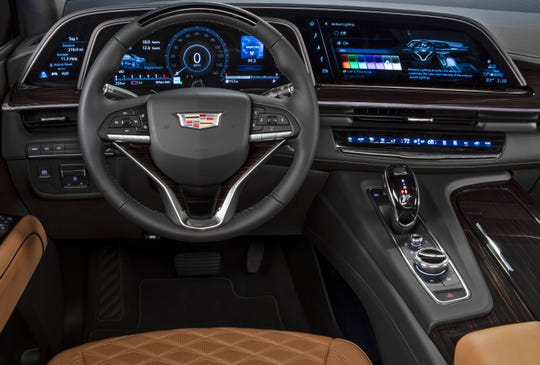 Better drive: Waze knows which lane you should pick

Along with augmented reality (AR)-enabled navigation – which uses live street views with directional overlays to enhance driving directions – the Escalade also has an industry-first curved OLED display, which is as thin as a sheet of paper. In total, there are more than 38 inches of screen tech, and with twice the pixel density of a 4K television.

Out this fall, the OLED display and AR Navigation come standard with the 2021 Escalade, while the Super Cruise feature costs about $2,500, available on the Premium Luxury, Sports, and Platinum trims.

♦ Dashboard cameras (“dashcams”) give you peace of mind just in case of an incident on the road (or interaction with authorities). The Sylvania Roadsight dash camera line offers a wide-angle HD camera system that loops video recordings of road interactions and automatically saves footage in the event of a detected accident (G-sensor technology). Plus, unlike many other dashcams, the camera connects via its dedicated Wi-Fi to the SYLVANIA Connect mobile app (iOS and Android), which allows drivers can view a live-feed of the camera, adjust settings, and download and share footage, if desired. Prices start at $59 for the Sylvania Roadsight Rear and up to $149 for the Roadsight Pro model.

If you’re one of the tens of millions of Americans who talk to Amazon’s friendly personal assistant at home, this $49 device lets you add Alexa to any vehicle. (Photo: Amazon.com)

♦ While you may already have Siri or Google Assistant to talk to while behind the wheel – via Apple CarPlay or Android Auto, respectively – if you prefer Alexa, there’s an inexpensive way to add “her” to any vehicle. Called Amazon’s Echo Auto ($49), this device connects to the Alexa app on your phone and plays through your car’s speakers, through wireless Bluetooth or an available aux-in port. Echo Auto features eight microphones and far-field technology, so it can clearly hear you over music, air conditioning, and outside road noise. Along with using your voice to check the news, weather, manage your calendar or make calls, you can also stream content from Audible (audiobooks), Spotify (music and podcasts), Amazon Music, Apple Music, SiriusXM, and radio stations with TuneIn and iHeartRadio. An air vent mount is included.