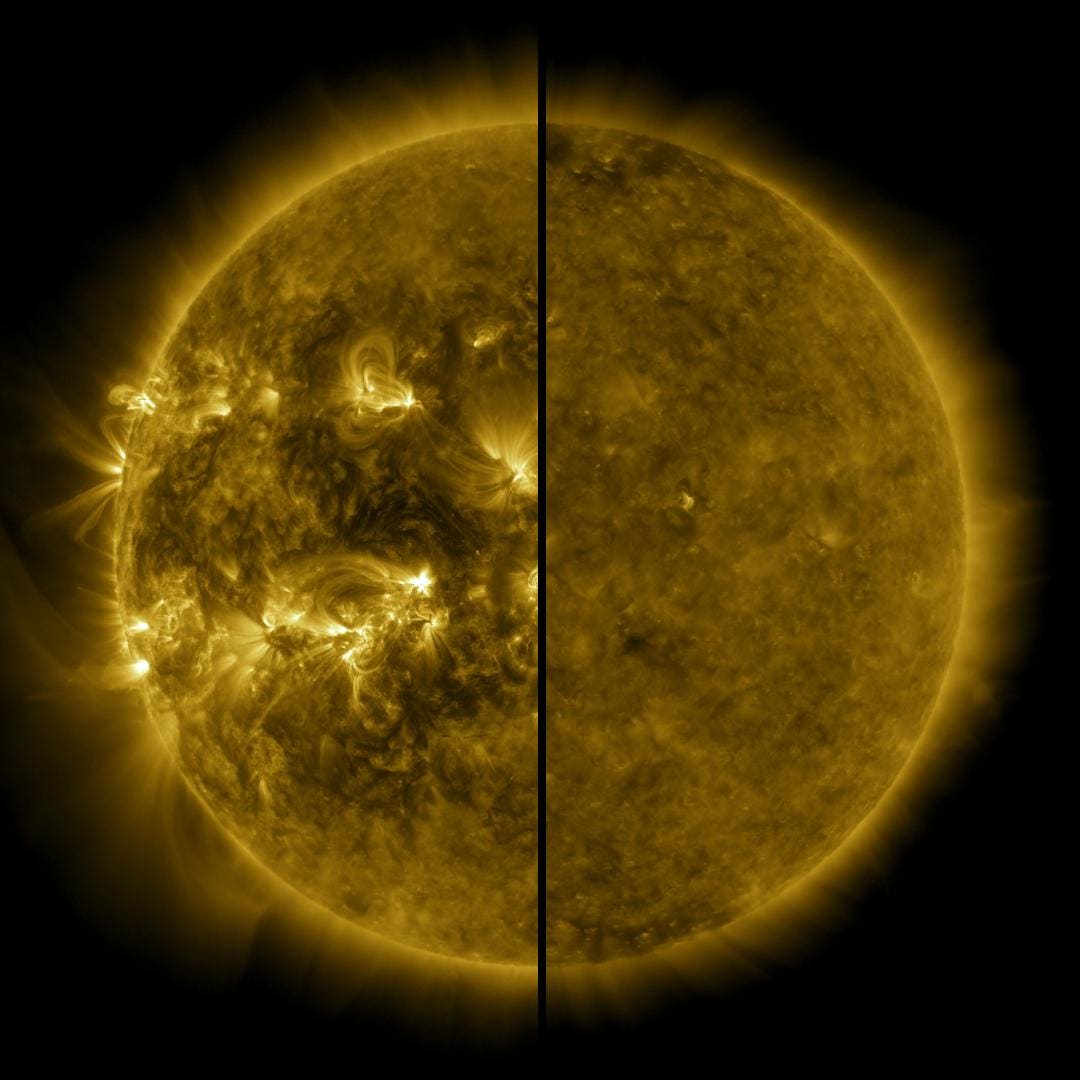 The Sun has begun a new cycle.

Experts from NASA and the National Oceanic and Atmospheric Administration (NOAA) said Tuesday that our star has begun Solar Cycle 25 after an uptick in activity on its surface.

It follows a deep “solar minimum” in late 2019, with NASA and NOAA reporting that Solar Cycle began in December 2019. They also said that our Sun will be at its strongest of this new cycle in 2025.

So what’s going on with our Sun?

What is a ‘Solar Cycle?’

Our star has a cycle that lasts between nine and 14 years, but typically 11 years.

From a visual perspective, the solar cycle is a “sunspot cycle.” Solar scientists can tell where the Sun is in its cycle by counting sunspots on its surface.

The number of the solar cycle comes from when records began in 1755, which is thus classed as Solar Cycle 1.

“As we emerge from solar minimum and approach Cycle 25’s maximum, it is important to remember solar activity never stops; it changes form as the pendulum swings,” said Lika Guhathakurta, solar scientist at the Heliophysics Division at NASA Headquarters in Washington.

What is ‘Solar Minimum?’

At the trough of the solar cycle is solar minimum, which is the period when the Sun is least active. It produces the fewest electrons and protons, making solar flares and coronal mass ejections (CMEs) relatively rare.

The solar minimum between Solar Cycle 24 and Solar Cycle 25 happened in December 2019, when the 13-month “smoothed sunspot” number fell to 1.8, according to the Solar Cycle 25 Prediction Panel, co-chaired by NOAA and NASA.

“Just because it’s a below-average solar cycle, doesn’t mean there is no risk of extreme space weather,” said Doug Biesecker, panel co-chair and solar physicist at NOAA’s Space Weather Prediction Center (SWPC) in Boulder, Colorado. “The Sun’s impact on our daily lives is real and is there.”

What is ‘Solar Maximum?’

At the peak of the solar cycle is solar maximum, which is when the Sun produces more electrons and protons as huge solar flares and CMEs. The last solar maximum occurred in April 2014 when sunspots peaked at 114. The average is 179.

It’s the last solar cycle that came to an end in December 2019. It lasted 11 years and was, according to NASA and NOAA, the weakest solar cycle in 100 years—as denoted by its low sunspot numbers.

We are now in Solar Cycle 25 with peak sunspot activity expected in 2025, said NASA and NOAA. Activity on the Sun has been gradually increasing since December 2019, which is why NASA and NOOAA have been able to put a date on the end of the last solar cycle.

How active will the Sun be during Solar Cycle 25?

Solar Cycle 25 also looks likely to be a weak cycle. In December the panel forecast that the peak—solar maximum—will occur in July 2025 when 115 sunspots are expected. That makes it about the same as Solar Cycle 24, though the panel say that solar maximum could occur eight months before or after July 2025.

“How quickly solar activity rises is an indicator on how strong the solar cycle will be,” said Biesecker. “Although we’ve seen a steady increase in sunspot activity this year, it is slow.”

What is a ‘Maunder minimum’?

A “Maunder Minimum” refers to the period between 1645 and 1715 when sunspots were very rare and there may have been a “little ice age.” After four solar cycles with a declining number if sunspots, something similar was feared, but the panel now thinks that Solar Cycle 25 will end the trend for a weakening Sun.

“We predict the decline in solar cycle amplitude, seen from cycles 21 through 24, has come to an end,” said Lisa Upton, Ph.D., panel co-chair and solar physicist with Space Systems Research Corp. “There is no indication we are approaching a Maunder-type minimum in solar activity.”

What is ‘space weather?’

As the Sun wakes-up solar activity will increase, and so the risk of extreme “space weather” will also.

The Sun’s corona releases energy in flares containing hot ionised gas, which travel towards Earth. “While we are not predicting a particularly active Solar Cycle 25, violent eruptions from the Sun can occur at any time,” said Biesecker.

All that light, energy and solar material from the Sun can spell trouble for computers, communication networks, satellites, power distribution networks, aviation and astronauts.

How do we predict space weather?

Scientists are now working on models of space weather so they can predict it in advance. “There is no bad weather, just bad preparation,” said Jake Bleacher, chief scientist for NASA’s Human Exploration and Operations Mission Directorate at the agency’s Headquarters. “Space weather is what it is—our job is to prepare.”