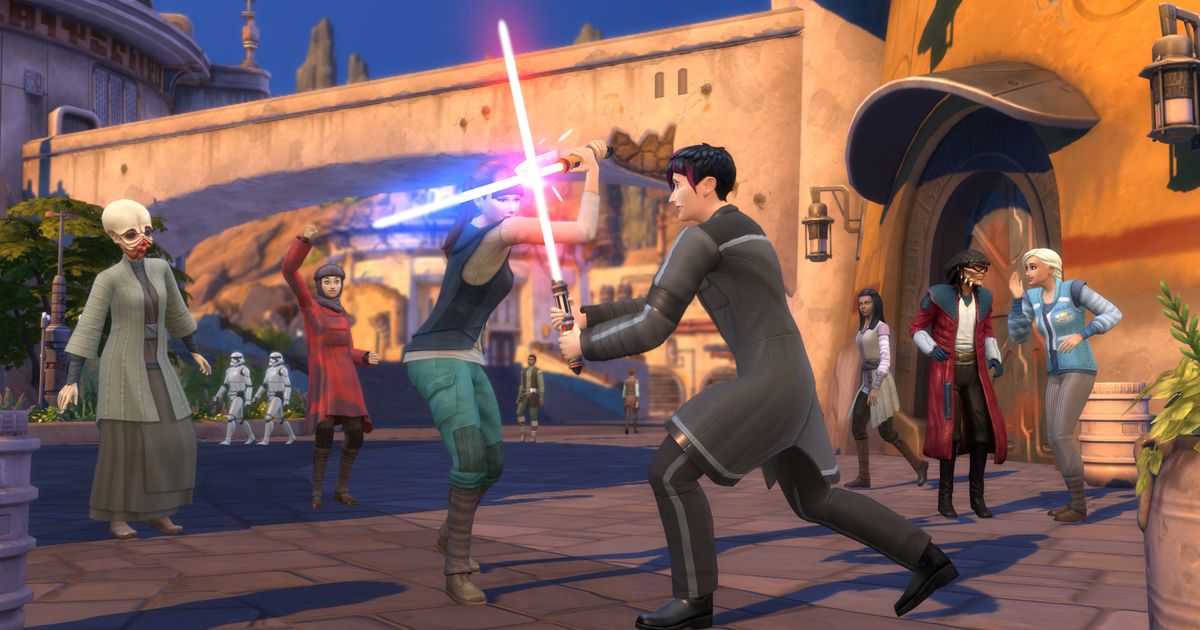 Vacations are hard in this, the year of our shared pandemic trauma. That’s why Journey to Batuu, the latest expansion for The Sims 4, arrives at the perfect time.

Back before COVID-19 trapped us all in our homes, I dreamed of planning a trip to Disney World’s new Star Wars theme park, Galaxy’s Edge. I convinced my partner, enlisted a group of friends, and worked out a babysitting plan for a child who’s still a few years off from being able to appreciate such a trip. We were all set to go in 2021 as soon as the much-hyped resort opened.

Needless to say, none of that is happening now. Those of us who trust science are all huddled in our little pandemic pods waiting for the nightmare to end. So it was a welcome surprise when, at the end of August, Electronic Arts revealed the new Star Wars-themed Sims 4 expansion, and confirmed soon after that the vacation space was actually modeled after Galaxy’s Edge.

“When we were talking about doing our next game pack, Galaxy’s Edge was actually just opening up and we felt like it was a really nice fit for the Sims gameplay experience,” lead producer Antonio Romeo said during a recent interview.

The team at The Sims 4 developer Maxis already knew their fans like Star Wars. Free updates in 2016 and 2019 – which added classic character looks and a Mandalorian-inspired “baby Yoda” decorative statue, respectively – went over very well. And now along came Galaxy’s Edge, this fully realized Star Wars theme park experience with lore and a story of its own, but few outlets where that story was apparent.

“Galaxy’s Edge [had] only been explored through the park itself and maybe a couple comics, so it was nice to be able to take our shot at blowing out that lore and expanding the stories further, with [Galaxy’s Edge mainstay characters] Hondo Ohnaka and Lieutenant Agnon.”

Journey to Batuu adds the tools necessary for you to impart a little Star Wars into your Sims story.

That was the idea Maxis brought to Disney by way of Lucasfilm. It worked. The Star Wars rights-holder signed off and Journey to Batuu was born. For fans of The Sims 4, it’s immediately apparent that this is something different. Romeo said it compares in some ways to 2019’s expansion, StrangerVille.

“It was a single linear story where you were sort of investigating this world and understanding the weird conspiracy that was going on,” he explained. “We saw people really enjoyed that sort of narrative experience so we felt like Journey to Batuu was a chance for us to blow that out even further.”

The Star Wars pack is similarly story-driven, but it gives players a (non-permanent) choice of siding with one of three factions: Resistance, First Order, or smugglers. Whichever one you pick, your contact in the faction serves up repeatable missions that can earn you Galactic Credits (Batuu’s currency) and other goodies.

It’s not a totally different game, of course. You’re not participating in space dogfights or actively controlling lightsaber duels. This is still Sims, so you’re interacting with the world and the characters inside it in all the same ways. The handful of missions that take you off-planet unfold inside of text boxes, with you making simple choices along the way.

But that’s The Sims. This is an all ages, user-friendly game that emphasizes creativity and role-playing over action. “It’s a little less open-ended [than] The Sims, but we know that players actually need a little assistance telling their story from time to time,” Romeo said.

For people like me, the real thrill of flying off to The Sims 4‘s version of Batuu is having an opportunity to get a taste of the Disney park without leaving home. The in-game Batuu’s three neighborhoods are all based on the Black Spire Outpost and surrounding areas at Galaxy’s Edge.

It’s still a fictional space location, not a virtual recreation of the theme park. But you can get food (and learn in-game recipes from!) Ronto’s Roasters. You can get scrap, decorations, and your own robot pal through the Droid Depot. And when you do eventually get all the pieces necessary for a lightsaber, you get to build it at Savi’s Workshop.

These are all actual Galaxy’s Edge locations, too. More than that, the act of visiting the IRL park and stepping into your personalized Star Wars adventure is realized virtually in the way Journey to Batuu invites players to come in, hang out, and do their Sims thing.

“The biggest thing with The Sims is really allowing players to to tell their own stories in this quirky world,” Romeo said. “And then Journey to Batuu adds the tools necessary for you to impart a little Star Wars into that story.”

Journey to Batuu is available now on all platforms that support The Sims 4.