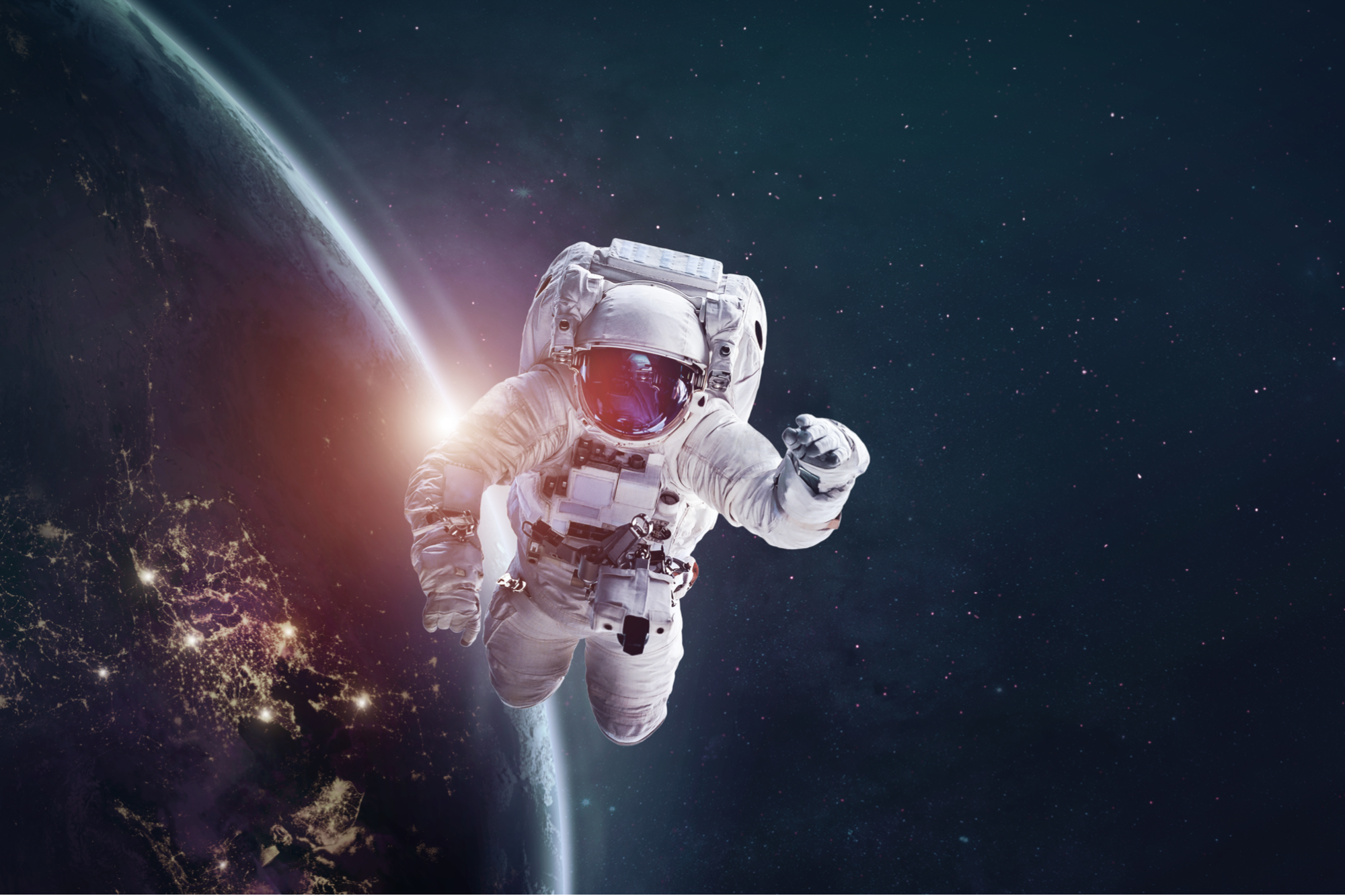 “The sky starts at your feet. Think how brave you are to walk around.” – Anne Herbert.

It’s no secret that the UAE’s space ambitions have excited both citizens and residents of the country, as it takes some extraordinary steps ahead in realizing a better future for us all. Indeed, we are at the tipping point of the creation of a new industry revolving around space. To understand its impact and its realm of opportunities, we will need to step away from solely focusing on the engineering side of it, and look instead at the multifaceted space economy that’s on its way.

Some of us won’t be working directly in this industry (much to the regret of my parents, who are talented engineers), but all of us will certainly be living and being part of this new space economy. For those unfamiliar with such distinction of “industry” vs “economy”: consider the example of the AirBnB economy. Home rental and hospitality is an industry with its own workforce- yet, all of us have been living in an Airbnb economy for nearly a decade. The economy is thus not about an app or an affiliated technology, but rather about new forms of human interaction, new kinds of jobs, and sub-sector development, as well as cross-industry value creation.

That said, if you’re as excited about the space economy as I am, read on and join in the discussion.

What is the space economy?

The space economy will likely to be built within 10 main domains (these are what we can foresee currently, living in the year 2020). Some of them are familiar to us since the 1960s, but many are new:

We used to think of the public sector as a driver of space technologies and their applications  (given that much of the research and development concerns matters of the national security). But it is not just about the government efforts anymore. In the past decade, there have been two major trends that are changing the status quo:

1. Acceleration of public-private partnerships (PPP). The US National Aeronautics and Space Administration (NASA) has primarily led this change, when in 2014,  a special report entitled Public Private Partnership for Space Capability Development was released that identified seven impact areas where the private sector could be engaged. These included work involved for satellite servicing, interplanetary small satellites, robotic mining, microgravity research for biomedical applications, liquid rocket engines for launch vehicles, wireless power, space communications, and earth observation data visualization. The same year, the annual “Tipping Point” awards were launched, which assisted NASA to access emerging technologies being developed by private companies. One of the most prominent examples of this is probably NASA’s joint work with SpaceX and Boeing to develop a U.S. commercial crew space transportation capability.

2. “It used to be a space race between countries, and now it’s a space race between billionaires.” That’s a statement by Anoop Menon, Associate Professor at The Wharton School at the University of Pennsylvania. Indeed, when considering the space economy, we can instantly think of Elon Musk’s SpaceX, Jeff Bezos’ Blue Origin, and Richard Branson’s Virgin Galactic, but these are just a few of the private individuals involved in it- as we can see today, many more visionaries and technologists are entering this space by initiating own projects and funding individual startup companies. Perhaps, not surprisingly, in 2019, while government investment in space increased by 1%, the private sector funds in it grew by 6.3%. 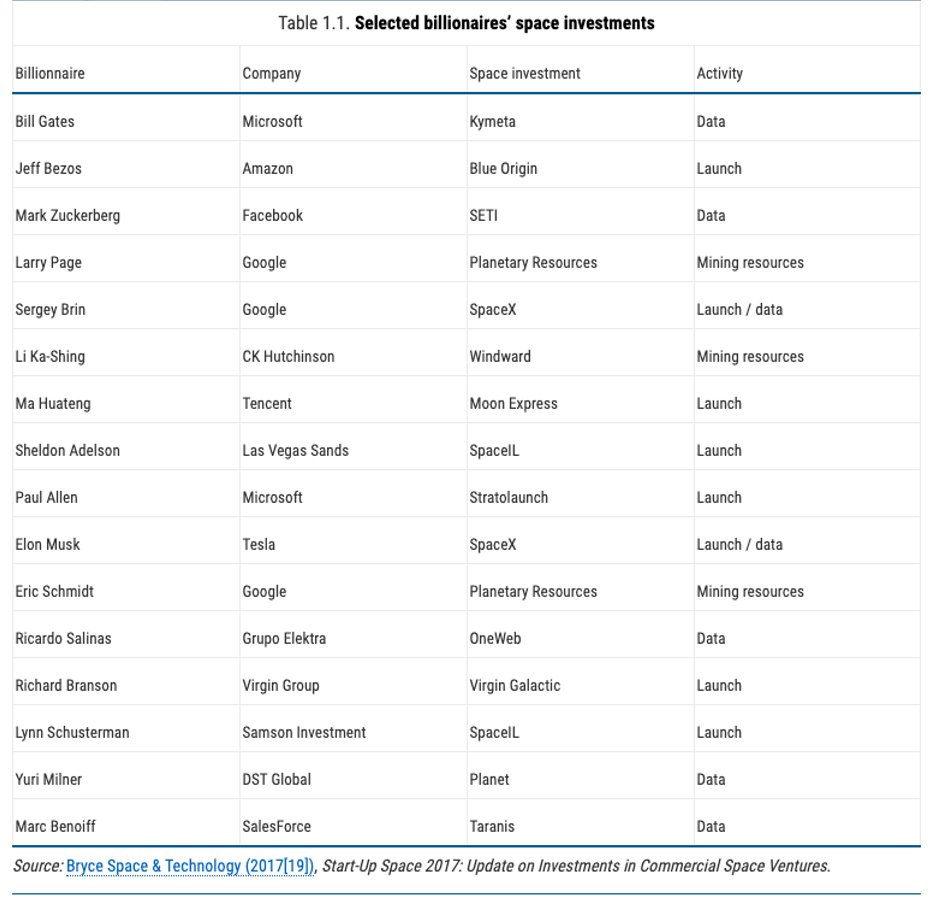 The ever-growing collaboration between government capabilities and the private sector’s capital and ingenuity has been reflected in the biggest barrier for the new entrants and startups- the cost. Today, most of the space startup companies are growing within ecosystems and incubators funded by the government -consider, for example, NASA Research Park (US), Harwell Space Cluster (UK), Skolkovo Space Cluster incubator (Russia), Global Space Industry Accelerator (UAE)- as well as large corporations -examples include Starburst Accelerator (operating globally) and Boeing Horizon X (US).

Related: To Infinity And Beyond: Dtec Forum Looks At The Opportunities In UAE’s Space Tech Sector

A question for policymakers today

The question policymakers have today is not “whether we can,” rather it’s about figuring out “in which segment of the emerging economy could I have a competitive advantage in, and allocate my resources and investments today, so that my own capabilities and potential of the private sector in the country are built up.” Keeping this in mind, this needs a look into what kind of opportunities are actually available, and also, what kind of talent do we need to grow and attract to cement leadership in the selected domains of space economy. Here’s a primer:

1. Space mining This essentially refers to he extraction of water and minerals, including rare metals, from celestial bodies. Why are those 17 rare earth metals so important to us today that we are ready -or need to go- all the way to the asteroids? The answer is that every thing that we have high hopes for a sustainable future -electric vehicles, solar panels, mobile and computer hardware- requires those metals. An interesting fact to note here: according to Reuters, there is one country who supplied 80% of the rare earth imported by the United States between 2014 and 2017: China, which is also home to at least 85% of the world’s capacity to process rare earth ores. Some governments are actively preparing for the creation of such segments of the industry- e.g. Luxembourg has created the $227 million Space Resources initiative to establish the country as a European hub for space resources. The talent needed: space miners.

2. Space stations These refer to spacecrafts where people can stay for a prolonged period of time in space. Whilst about 20 space stations have been launched since the 1970s, currently, there is only one station operating- the International Space Station, operated by an international consortium of centres, primarily Russia and the USA. But more countries have expressed their keen interest in launching their own space stations in the coming future, including India confirming its plan to join the Russia-USA-China league by realizing such a project by 2030. Concurrently, several private sector players, including Bigelow Aerospace and Axiom Space, are working on the commercial space stations projects as well. The talent needed: engineers.

3. Space settlements If one were to actually consider residing in space, what kind of architecture would those settlements have? What kind of governance would it need to have in place? How would essential services, like, say, healthcare, be provided to those in these settlements? How would the social dynamics evolve with the internationalization of human capital in outer space? To answer these questions, the talent needed: architects and landscape designers, space medics, anthropologists, psychologists, and more.

4. Space law The governance involved in everything from settlement policies to the mining of celestial bodies need to be updated, or, in many cases, created from scratch. Today, there are such specialized offerings being developed by several universities, and we can safely assume that the demand for such experts from both the private and public sector will be ever-increasing. The talent needed: space lawyers.

5. Space sustainability and recycling There are already several projects specifically designed today to monitor the waste situation in space, so as to ensure that the bioproducts of human activity in space won’t represent an existential threat to the astronauts and satellites in the space. As the exploration of space intensifies, so does the hazardous impact of this activity in the form of garbage. There are already startups in this space working on various models of satellites that will serve as a debris catcher. The talent needed: environmentalists, ecologists.

6. Space tourism The user journey for cosmic travel is yet to be designed. The talent needed: engineers, experience creators.

7. Spaceliner companies Before 1903, there was no airline industry- as such, a person living in that era would probably not contemplate or be excited about the medium of travel that we all make use of today, or even the business opportunities that the industry presents- but that doesn’t mean they don’t exist, as is evidenced by the world we currently live in. This is the thing to keep in mind when considering the potential of spaceliner companies- Richard Branson’s Virgin Galactic is already on its way to becoming the space equivalent of commercial airlines. The talent needed: space pilots.

8. Space academies Given all of the above instances, it’s safe to expect the need for training and educational institutions that provide  tracks for various audiences, ranging from commercial astronauts to civilian workers (service personnel, tourists, researchers embarking on space travel, etc.). Since the early 2000s, privately funded projects have been making headlines in this domain- consider Russian MirCorp , Virgin Galactic, and Bigelow Aerospace. Summer 2020 has seen NASA come up with several announcements that underscore its intent to further boost public-private partnerships in this area, allowing its own personnel to fly on commercial suborbital spacecraft, which will ultimately be enhancing astronauts training that’s delivered by private sector players. The talent needed: space flight instructors.

9. Space manufacturing One of the most recent trends in this space is in the use of 3D printing to manufacture components in space, so that the crew don’t have to wait until a needed component is manufactured and delivered to space from the earth. The talent needed: engineers.

10. Spacecraft component developers and manufacturers Much like the above sector, the talent needed: engineers.

In a recent Youtube video that dwelled on the origin and fatality of Silicon Valley, the interviewee was asked a question: “Where will we see another Silicon Valley?” The response: “We will know that once we know which industry will make the biggest impact in the future.” Maybe this could be the space industry, given the business opportunities it presents, where many new players could shine- such as the UAE. Only time will tell!

Related: The New Frontier: Space Law And The Galactic Economy