The public expects to see police body-camera videos. The question is when they should. 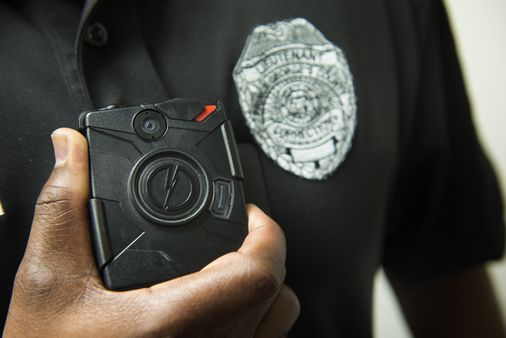 Although the police don’t need the attorney general’s permission, they are asking for his office’s advice on whether they should release body cam videos before cases are prosecuted. And, he said, the rules aren’t clear.

So Neronha is seeking an advisory opinion from the state Supreme Court’s ethics advisory panel, because he said he wants to be able to tell police agencies that they can publicly release videos when police officers use force.

“The point of the letter [to the panel] is to give us the ethical guidance we need to turn it over,” he said. “Right now, our advice to police is we cannot advise to turn that over voluntarily, and perhaps not pursuant to [the state public records law] because of the accused.”

The decision will affect the public’s access to those videos.

For one, it would make a difference in a case in Providence, where a veteran police sergeant is charged with assaulting a handcuffed man during a domestic violence call in April.

The Providence Police Department announced the arrest of Sergeant Joseph Hanley and released the police report, but not the footage from an officer’s body-worn camera or a bystander’s cell phone, citing the pending criminal trial.

“In the future, depending on the ethics committee’s decision to the A.G., we would release them,” Providence Public Safety Commissioner Steven M. Pare told the Globe Friday. “We can’t now because of the pending case and the risk of impacting the case.”

Neronha, who took office in January, said his request to the ethics panel wasn’t based on any particular case. “We’re getting multiple requests from the police, and we can’t give any guidance on that,” he said. “I don’t think it’s helpful to tell the police, ‘You do what you got to do.’”

In cases where the police do everything right and the use of force is justified, there’s no reason to withhold the videos, Neronha said.

The calculation is different for pending criminal cases. “If I release that case, and it shows a police officer doing bad things, he has the same rights as anyone else under the Constitution,” Neronha said. Releasing the video could be seen as engaging in pretrial publicity, or could affect the chances of getting a conviction.

“The public wants justice, but releasing this information before the investigation is over could ultimately mean there is no justice,” Neronha said. “I don’t want to do something to lose my case.”

Steven Brown, the executive director of the Rhode Island chapter of the American Civil Liberties Union, commended Neronha for seeking the advisory opinion — and expressing the importance of public access to the videos.

“There should be a presumption that the video can and should be released,” Brown said Friday. “Transparency and accountability are really essential. That should be the reason the police are wearing the body cameras in the first place.”

Providence and Newport police are the only departments with body-worn cameras now, but others are coming on board.

Sidney Wordell, retired police chief of Little Compton and executive director of the Rhode Island Police Chiefs Association, said that if funding weren’t an issue, all of the police agencies in the state would equip their officers with body-worn cameras. The cost would be about $3 million for all 2,500 officers, he said.

“I think the chiefs association has been very open in recognizing transparency is a good thing. It helps us to enforce or reinforce the trust that we need from the community,” Wordell said. “But I think we recognize you can’t hide behind instances when it goes bad or wrong; you can’t hide behind the release.”

Three years ago, the Providence Police Department became the first law enforcement agency in Rhode Island to equip its officers with body cameras. Within weeks, the department’s policy on cameras was put to the test, after police officers and the state police shot and killed a motorist and wounded his passenger on Route 95.

The commissioner and police chief had vowed that they would release any videos involving deadly use of force. So the day after the shooting, Pare and Chief Hugh T. Clements Jr. publicly showed the videos from an officer’s body-worn camera and traffic surveillance cameras and explained how the deadly shooting unfolded.

One involved a Black firefighter, sitting in a car outside the fire station, who was confronted by two officers investigating a call about an armed robbery. The commissioner said there was no evidence of racial profiling.

Another involved City Councilwoman Kat Kerwin, who intervened in a noise complaint against a friend’s bar.

In both cases, the Providence police said, their officers performed their jobs properly. And neither of these cases involved arrests.

The outcome was different in the case involving Hanley, who was filmed by a bystander and caught on a body-worn camera allegedly assaulting a suspect on April 19.

The department charged Hanley with simple assault in May and suspended him with pay, but declined to release the videos, citing the pending criminal case.

The Providence External Review Authority, a civilian review board, said in an investigator’s report published last week that the videos show Hanley kneeling on the man’s neck and shoulder, punching and kicking him, and walking on his legs.

However, PERA didn’t release the videos either. PERA executive director Jose Batista didn’t respond to public records requests made by the Globe on July 31 or last week.

After the deaths of George Floyd and other Black people by police, Neronha announced in June that he was expanding his ability to review the use of force by police in Rhode Island.

With that, Neronha found, his office also needed to know what advice they could give to police departments who had requests for video in these cases.

“The public’s interest in transparency and accountability is undoubtedly at its apex when it comes to police use of deadly force, less than deadly force that results in serious bodily injury, or alleged excessive force,” Neronha wrote in his Sept. 22 letter to the ethics advisory panel. “Access to police body worn camera and other video footage in the possession of police … could help assauge community concerns about police misconduct or confirm the need for investigation and oversight.”

Neronha is proposing that police departments can release these videos before a trial in response to public records requests and after consulting with the attorney general’s office.

First, the police would have to consider: Is the investigation substantially complete? Is public release unlikely to interfere with the investigation? The police also have to make sure that the videos don’t cause an unwarranted invasion of privacy, disclose the identity of a confidential informant or police tactics, or endanger anyone’s life or safety.

Neronha said that prosecutors and the police would be limited in making any remarks about the videos, beyond a recitation of the facts. Any release of the videos would be accompanied with a disclaimer that a defendant is innocent until proven guilty.

This approach, Neronha said, should meet the professional ethical rules required of the prosecutors. “If release of such videos cannot take place until after an adjudication is complete, the public could be left in the dark for years after the incident has taken place,” he wrote to the panel. “If recent events have taught us anything, it is that such lack of transparency is untenable.”

In this way, the videos would be treated like a public record and subject to the same considerations under the state Access to Public Records Act.

Brown, at the ACLU, said the state Law Enforcement Officers Bill of Rights, which governs how police officers are disciplined, wouldn’t prevent the release of the videos. While police chiefs are limited in what they can say about officers under investigation, they can release the video footage without “offering commentary,” he said.

This is something that Wordell, of the chiefs association, would like to see. The camera plays a role, and the police chiefs would like to have the ability to present the videos. “If a chief can say, ‘This is the charge, and this is where it stands,’ I think that holds weight with the community,” he said.