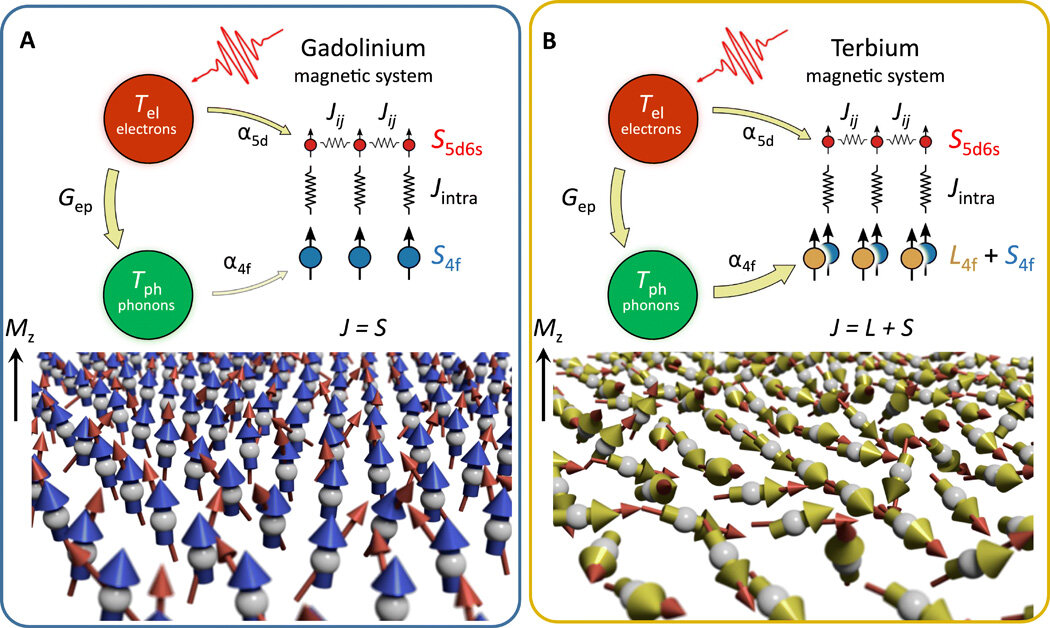 Rare-earth magnetism is dominated by localized 4f electrons, relative to inner transition metals (that are mostly comprised of lanthanides) and cannot be directly excited through an optical laser pulse. As a result, ultrafast demagnetization of rare-earth metals involves a distinct process in contrast to other elements of the periodic table. During demagnetization of rare-earth metals, researchers involve the excitation of magnons—a quasiparticle, viewed as a quantized spin wave. In a new report now published on Science Advances, B. Frietsch and a team of multidisciplinary scientists in physics, astronomy, mathematics and supercomputing in Germany, Sweden and the Czech Republic, disentangled the ultrafast dynamics of 5d6s and 4f valence band magnetic moments in terbium (Tb) metal using time-resolved photoemission spectroscopy. Based on the results of demagnetization, they established the coupling of 4f spins to the lattice structure through orbital momentum to provide an essential mechanism driving the dynamics of magnetization in technical materials with strong magnetic anisotropy.

A fundamental aim of condensed matter physics is to understand the nature of ultrafast spin phenomena under strong nonequilibrium conditions. When researchers excite a material using a femtosecond optical pulse, the valence electrons are pushed out of equilibrium within the duration of the laser pulse. Valence electrons typically reside in an outer shell of an associated atom and can participate in a chemical bond. In the timeframe in which the system achieves thermal equilibrium among excited electrons, lattice and spin systems, the medium goes through a transient state of non-equilibrium for a brief period. Previously unknown phenomena can occur during this state, hitherto unrecorded under thermal equilibrium of the magnetic system.

The distinct nonequilibrium behavior of spin systems therefore present an opportunity to understand the decisive couplings between electrons, phonons and spins driving the dynamics of magnetization after femtosecond laser excitation. Scientists had previously established ultrafast demagnetization of nickel and even proposed mechanisms of spin-lattice coupling relative to rare-earth metals. In this work, Frietsch et al. prepared films of the terbium rare-earth metal at 10-nm thickness for angle-resolved photoemission spectra (ARPES) experiments, where they combined a higher-order harmonic generation (HHG) beamline with an ultrahigh-vacuum endstation and used near-infrared (NIR) laser as a pump pulse with its harmonics as a probe pulse to understand the spin phenomena.

The scientists used magnetic linear dichroism (MLD) in angle-resolved photoemission spectra (ARPES), which was comparable to the magneto-optical Kerr effect. The MLD signal was proportional to sample magnetization during thermal equilibrium. When they compared magnetic linear dichroism of the low- and high-spin components of Tb, they did not observe a significant difference. To understand the dynamics of magnetization with Tb, therefore, the scientists compared the 5d and 4f moments with the previously reported results on gadolinium (Gd) – another rare-earth metal. Frietsch et al. experimentally drove the magnetic system out of equilibrium and combined measurements of valence band exchange splitting and magnetic linear dichroism to understand the dynamics of 5d and 4f spins. When they compared the orbital-resolved dynamics of 5d and 4f moments in the two rare earth metals Gd and Tb, the optical excitation appeared to act faster and more efficiently for Tb compared to the 5d spin subsystem of Gd.

To further understand the qualitative opinions revealed in the study, the team analyzed the magnetization dynamics with an orbital-resolved spin model. During the experiments, Frietsch et al. excited the 5d and 4f spin dynamics using thermal fluctuations of the electron system and a phonon heat bath. They determined the magnetization dynamics of both metals by coupling the total 4f spin subsystem to the phononic system. While strong spin-phonon coupling supported ultrafast femtosecond (one quadrillionth of a second) dynamics in Tb, weak spin-phonon coupling led to slower picosecond (one trillionth of a second) dynamics of the 4f magnetic moment in Gd.

In contrast, the team noted the 5d magnetic moment to show an ultrafast response in both metals, since the valence-band electrons were coupled to the 4f system and directly excited by the laser pulse in this instance. The 5d magnetic moment of Tb thus nearly paralleled the ultrafast dynamics of the much larger 4f magnetic moment of the metal. The noncollinear arrangement of the two on-site moments represented the different degrees of excitation of the 5d and 4f spin subsystems. The simulation data of spin dynamics agreed with the experimental work.

In this way, the pump-probe measurements revealed vastly different ultrafast demagnetization dynamics for terbium (Tb) and gadolinium (Gd) rare-earth metals. Meanwhile the 5d spin moment and the localized 4f moment in Tb demonstrated remarkably similar decay constants. The peculiar behavior between Tb and Gd allowed the researchers to pin down an essential mechanism for ultrafast magnetization dynamics by coupling the 4f spin to the lattice via the orbital momentum, which led to ultrafast excitations of magnons. To gain further perspective to their work, the team compared the outcomes with previous experiments on demagnetization.

Using time- and angle-resolved photoelectron spectroscopy, B. Frietsch and colleagues recorded the valence band exchange splitting and the 4f magnetic linear dichroism to understand the fundamentally different spin dynamics of two rare-earth metals (Tb and Gd). The results highlight lattice interactions as a decisive ingredient to understand optical switching at the microscale in rare-earth metals.

Ultrafast electrons in magnetic oxides: A new direction for spintronics?

Citation:
The magnetization dynamics of rare-earth metals and the role of ultrafast magnon generation (2020, September 29)
retrieved 29 September 2020
from https://phys.org/news/2020-09-magnetization-dynamics-rare-earth-metals-role.html