The Future Of Fracking In The United States 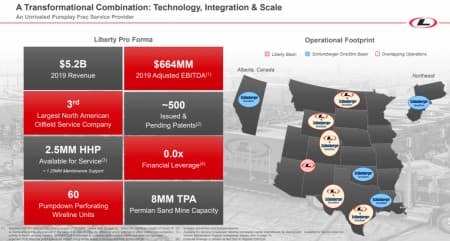 The recent combination of Schlumberger’s, (NYSE:SLB) OneStim business with Liberty Oilfield Service, (NYSE:LBRT) created a colossus in North American fracking. One estimate suggested the combination of these two would result in market dominance with a share at ~20%. That sounds like a lot, but it should be noted that the entire U.S. frac market consists of 85 spreads currently, as of September 11th. This represents an active fleet of about 17 for Liberty, or an equipment utilization rate of about 15% at roughly 30K HHP per spread.

The slide above shows some pretty bullish stats in terms of revenue and EBITDA, had the combination been in effect for 2019. It is important for investors to remember, this is 2020, and it’s a different world, as the frac spread count and WTI price graph below indicate.

For those who may not follow oil and derivatives closely, we are in a period of substantial global inventory over-hang, and concerns about faltering demand due to renewed concerns about Covid-19 infection rates on the rise as we go into fall.

My expectations are that OPEC+ will moderate their planned production increases for the fall to try and prevent a complete oil price collapse. This, when added to the stark declines in U.S. shale production we expect, should buttress prices in the mid-to-high $30’s, and pave the way for a substantial increase in prices later this year and into 2021.

Related: This Small Nation Is Building The World’s Next Major Energy Hub

In an OilPrice article in July, I discussed the traditional approach to oilfield service is being altered in a new asset-lite model. This model shifts the focus from the old, brawny men and massive machinery mode to a model that emphasizes Artificial Intelligence, AI; and Cloud-supported software solutions. From hands on the rig, to remote Real Time Operations centers where a relatively few engineers monitor well operations and provide operations support. Schlumberger CEO, Oliver le Peuch, set the stage for this transition in the Q-2 conference call-

“In North America, we accelerated the restructuring initiated last year with emphasis on scale-to-fit and the asset-light business model with significant permanent reductions to fixed and infrastructure costs. At this point, we have shut down about 150 of our facilities and continue to make progress on the technology access franchise. In short, we readied the business for a market of smaller scale and lower-growth outlook, but with higher returns. The adoption of digital, both internally and externally, is becoming a major – factor of performance and was very impactful during the second quarter operationally and financially.”

Given the change in their outlook for the future of oilfield services-OFS, this move should not have come as a surprise. After taking ~$12 bn in non-cash charges for the half year ending June 30th, and announcing the permanent layoff of 20% of their workforce, it is clear that Schlumberger sees a vastly different approach to the OFS delivery space going forward.

This move for them is a hat-trick. They move all of the written-down frac assets to Liberty’s books along with the few active spreads they had, along with other OneStim assets noted in the slide below. They get 37% of the resulting dominant U.S. fracking company and a couple of seats on its board. I regard this as a very sage move by Schlumberger’s new CEO.

There is no question that LBRT is a different and stronger company than it was just a few weeks ago.  Frac spreads cost tens of millions of dollars each, and have a fairly short service life, even when well maintained. Doubling their active spread capacity and providing another 1.25 mm HHP to maintain (scavenge for parts) the active spreads is an advantage worth a couple of hundred million dollars at least.

Liberty Chairman and CEO, Chris Wright comments on the new prospects for the company he founded-

“This transaction will be a transformative step forward in our journey as a company. Our expanded technology portfolio and breadth of operations will enable Liberty to further raise our already high bar for safe, innovative, efficient and ESG-conscious frac operations. I look forward to the OneStim team joining Liberty on our mission to help customers provide low-cost clean oil & gas to our country and the world.”

The increased footprint from the legacy Schlumberger facilities, the added horsepower, and access to Schlumberger’s DELFI cognitive AI environment will help propel LBRT to higher revenues and margins when the market strengthens next year.

The Thesis for LBRT

In order to be interested in LBRT as an investment you have to believe that things are about to get better in the U.S. oil patch. I’ve discussed in past OilPrice articles why I think this is about to happen. With three-quarters of the year behind us, there is no possibility for a revival of drilling and completions that will change the downward course of U.S. production. As the last Baker Hughes rig tally there are only 254 rigs turning to the right drilling new wells at present. This fails to replace the steep decline of shale wells that can drop as much as 60% of their production in the first year.

I have previously forecast an exit 2020 production rate of about 5 mm BOEPD for shale wells, and see nothing that will alter that outcome. Depending on the rate of DUC withdrawal I might be off by a month or two, but the key takeaway is that U.S. production will drop sharply soon from lack of new drilling.

With its peer leading presence in the frack-patch, in the event of a sharp rebound in U.S. oilfield activity, LBRT will be a principal beneficiary.

If you buy that argument, then LBRT has to be an attractive prospect on your watch list. It is worth noting that in the event there is a change in Administration of the U.S. government, there could be considerable political risk associated with Liberty.

Over the next few months, nothing about this arrangement between Schlumberger and Liberty expands the market. I don’t see a catalyst for oil prices to improve until there is a marked upturn in the economy, Congress passes some sort of stimulus, and we make a dramatic improvement in our defenses against Covid-19 virus laying us low.

Until then I think the new LBRT will limp along the same as the old one did, and turn in lack-luster quarters. I do not see the current price as being investible, in spite of the fact LBRT is up 6.5% today on essentially no news. There is no rational underpinning to the gigantic move the company has made since the deal was announced, and I think better pricing will present itself over the next few weeks and on into the 4th quarter.

Bottom-line- this is a good and transformative deal for LBRT, and in 2021 benefits will begin to accrue. Patience and picking your entry point will pay off here.

By David Messler for Oilprice.com