The Amulet Of Chaos PC Review 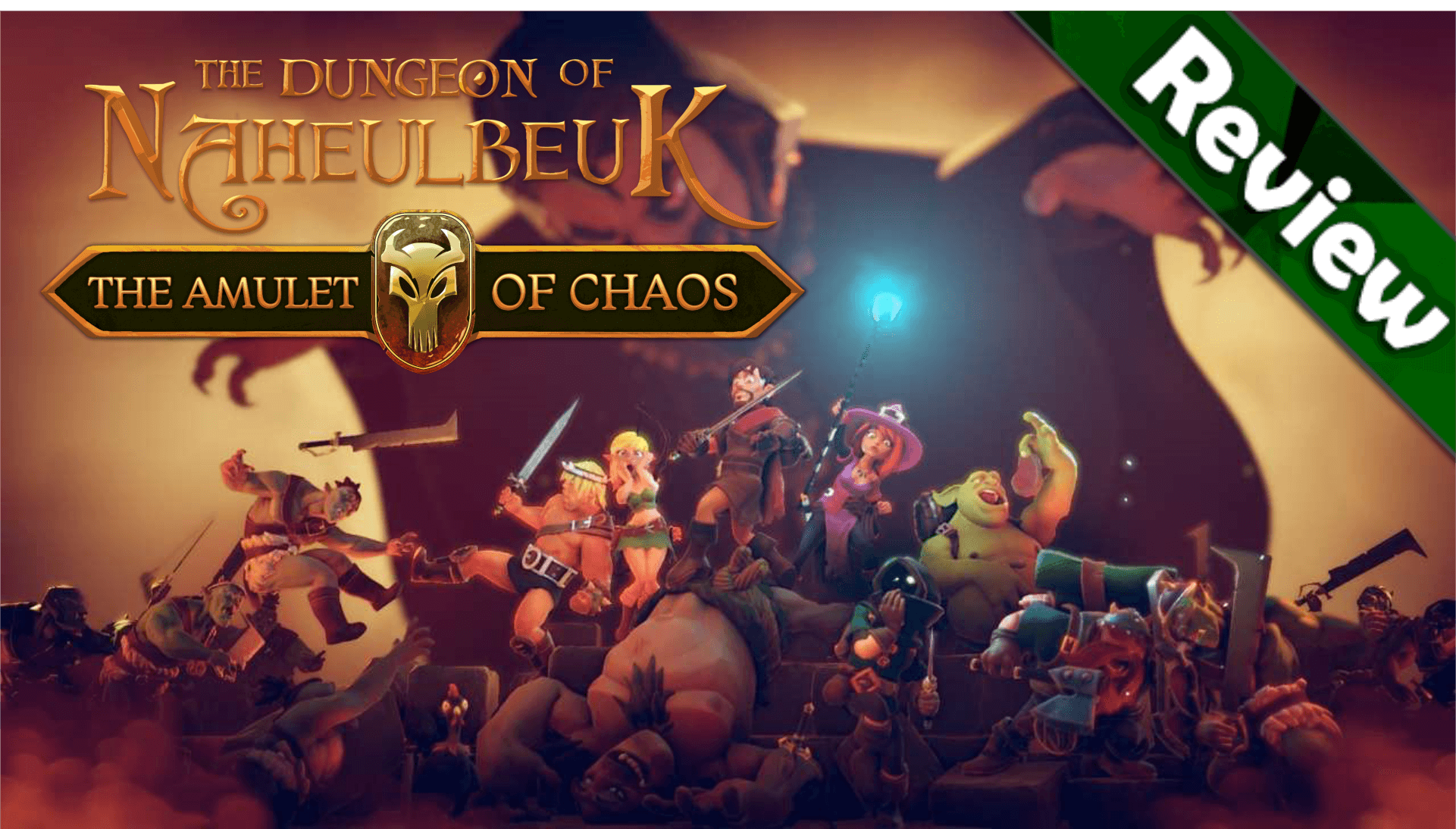 The Dungeon Of Naheulbeuk is a turn-based tactical fantasy RPG developed by Artefacts Studio. The game parodies a lot of things, including gaming and tabletop DnD. While some of the humor doesn’t quite land where it should (possibly due it originally being French and translated to English), and can feel juvenile at times, there are certainly many funny moments that put a smile on my face.

The game’s art style is charming, the animations are great, and the gameplay is solid where it counts, but it’s not without issues.

I’m not going to talk a lot about the game’s story. You play as a group of ragtag adventurers (the archetypal ranger, elf, dwarf, barbarian, thief, wizard, ogre, as well as a bard, paladin or priestess as the 8th party member- who you get to choose after the tutorial).

Their quest is to get a  specific statue, though unfortunately, they end up getting a cursed amulet along the way. What follows is a pretty hilarious adventure as they try to get rid of it, get the statue and escape the dungeon.

The story is not groundbreaking, and the humor relies on many of the tropes we’ve seen before. However, it does an adequate job of moving the game forward for the 30-40 hour campaign.

All the dialogue is fully voiced, which is nice, and the voice acting, while not amazing, is done well. I did find the elf somewhat annoying but otherwise, the banter throughout the game remained mostly entertaining. It is also possible to disable banter from the dwarf and elf specifically, or you can disable the overall amount of banter in both combat and exploration modes.

There are also a few choices to make that will affect the outcome of certain story/side missions, which will perhaps add to the replayability of the game if you intend to play it through again with a different character choice and difficulty.

The Dungeon Of Naheulbeuk is a turn-based tactics RPG, and I’m happy to say that it does this very competently. You only get to choose 1 member of the team, since the other 7 are set by default. Each character levels up and has active and passive skill trees which allow for some degree of customization. You can also respec every character at any time with a “cheap” potion.

Combat is what you would expect from a turn-based RPG. In a similar vein to XCOM, each character has 2 action points. You can attack and move, or sprint to move further which uses both actions. There is a cover system that reduces the enemies’ chance to hit, heroes/enemies can be flanked or backstabbed, there are buffs and debuffs, attacks of opportunity, and an overwatch mechanic.

There are however some slight differences to XCOM. Every character has a chance to either parry or dodge a successful attack, and there is also a 3% chance to have a critical failure (which is connected to the story). This critical failure could lead to casting the wrong spell, falling down, or even have your members damaging themselves or teammates. When your party misses or suffers from these bad luck events, a meter fills, called The Randomia meter (the amount added is based on how unlucky you were). Once filled it allows 4 different actions to be used. The effects range from giving an additional action point to a single party member, teleporting someone, or even healing the entire team a little. It’s a nice system and can turn the tide of an encounter. I never used it that much, but on the harder difficulties, it could prove essential. There is an initiative system as well which determines the order of acting per round, based on the character’s courage.

Your party will almost always be outnumbered, so you really need to pay attention and plan your strategy carefully. The game uses what the developers refer to as a “seed” system in combat. For example, let’s say you perform a few actions and are unhappy with the result. You then reload the game, only to try the same sequence of actions again. Now contrary to other games, in The Dungeon Of Naheulbeuk: The Amulet Of Chaos the outcome will be, once again, the same. Thus, “save scumming” is not going to work in this game.

There is also an injury system. So, if a character gets downed in combat they will accrue an injury which lowers their accuracy, movement and overall health. The more injuries your characters have, the weaker they are going be. These injuries can be healed after combat with bandages, first aid kits, or resting at an inn. Health is also not regenerated after combat, requiring you to top up your team with potions. Alternatively, you can use your healing abilities right before landing the final hit (since these abilities cannot be used outside of combat, which is a pity, though this decision was obviously made due to balancing issues).

Thankfully there are no time limits for the majority of scenarios you’ll encounter (I was not a fan of these in XCOM 2). There are a few encounters that will require you to do something specific in order to stop reinforcements that would otherwise keep coming, but they are not that many.

As you would expect from an RPG, there is also gear (with “rarity”) as well as a number of different consumables items that can be equipped. These are collected through the various lootable containers found throughout the world, after battles, or purchased from the vendors in the game.

Harder difficulties increase the enemies’ health, damage and accuracy, along with the cost of gear and consumables. As far as gold goes, once you get to mid game, you’ll likely have more than enough to spend.

When you’re not fighting, you’re running around exploring a big dungeon, picking up side quests, gathering loot, solving puzzles, and having to disarm annoying occasional traps.

There are traps located in certain areas of the dungeon, and running through them obviously does damage to your entire party. In order to see and disarm them, you’ll have to switch to your Thief. However, when the Thief is selected, the entire party moves very slowly. Thus, and once the trap is disarmed, you need to switch back to one of the other characters (the only thing you receive from disarming these traps are bombs for the Thief). Outside of this, there is no reason to switch between any of the other characters in exploration mode. As such, switching characters feels like it just stops the flow of exploration and ends up just being annoying. I mean, the Thief is already in the party, why force us constantly switching to him to check for traps? This could be removed without it affecting the game at all.

The dungeon is not procedural, so the layout and encounters will be the same during each playthrough. Obviously, though, it will play out differently depending on the sequence of actions taken, and whether you use the bard, paladin or priestess as your 8th character.

Unfortunately, the game is poorly optimized. I suspected as much after watching the game’s pre-release and demo footage However, I hoped this would’ve been addressed in the release version. Sadly, this is not the case.

While a lower fps does not really affect a turn-based RPG as much as it would an FPS, it should not be happening on a game that does not really offer amazing graphics. Turning down the details to Low from Ultra did not improve overall performance at all.

Zooming in with the mouse wheel also currently has issues. Either it zooms all the way in or all the way out; there is no way to choose the zoom level you want. Ironically, this is possible when using a controller. Thankfully, though, the devs have said that a fix is on the way.

Another issue is the autosaving mechanic in combat. The game autosaves at the start of every single round, and you cannot disable it. It’s barely noticeable at the start of the game, but by the time you reach mid/late game, this leads to long delays of up to 5+ seconds before you can act. It’s not game-breaking, but it can become really annoying, even when using an SSD. I would’ve liked the option to completely disable combat autosave since I could just quicksave whenever I wanted.

The UI, while not that optimal for navigating, it was decent for the most part. My main gripe was the tediousness of having to sell one item at a time. There was no way to mark items as junk and mass sell them for example. This may annoy you as you’ll be selling a lot of stuff.

As for the music, well, was average at best. It can become fairly repetitive sometimes, though you can always disable it from the game’s settings.

Finally, there were also a fair amount of translation issues, with subtitles that didn’t match the spoken dialogue and some spelling errors. However, I never came across any major game-breaking bugs or crashes.

All in all, I really enjoyed The Dungeon Of Naheulbeuk quite a lot, and the issues I previously mentioned were not enough to ruin my experience. I think the difficultly – especially in the first few hours/levels  – even on normal can feel a little unfair. The constant misses, critical failures, as well as enemies blocking/parrying attacks and almost one-shotting your team could lead some to frustration. Stick through it though. Once your party levels up a little and you get a better grasp of the game’s various systems, it gets easier.

It took me around 35 hours to finish the campaign (with the Priestess) along with many of the side quests (probably not all though). I think the asking price of $35 is reasonable for what you are getting. The combat, which is arguably the most important part of a game, remained engaging during my entire playthrough. There is definitely an incentive to replay it with a different character choice, a higher difficulty, and choosing alternate outcomes for certain story/side quests. In fact, I’ve actually started a new playthrough with a Paladin.

The humor in this game is going to be entirely subjective though, so it’s hard for me to make a call here. I enjoyed it, mostly.

Do I recommend the game? Well, as far as tactical RPG’s go, it may not be the best around, but I think it does an excellent job. If you enjoy tactical RPG’s – and can handle the humor – then my answer would be a yes. If you dislike tactical RPG’s then this is not going to change your mind, and you can safely avoid it.

Personally, I hope to travel with this ragtag group non-heroes again to see what kind of crazy adventures they embark on next.

Stephen is our resident kung fu master and reviewer. When he’s not kung fu fighting, he’s playing games, and has been since the atari 2600. He also runs his own YouTube channel called Particular Pixels, where he creates a variety of content related to PC gaming. He goes by the nickname Shaoling (not to be confused with Shaolin), which comes from his favorite PC game of all time, System Shock 2.