Tactics employed by right-wing extremist groups are now being used by extremists on the left, report finds 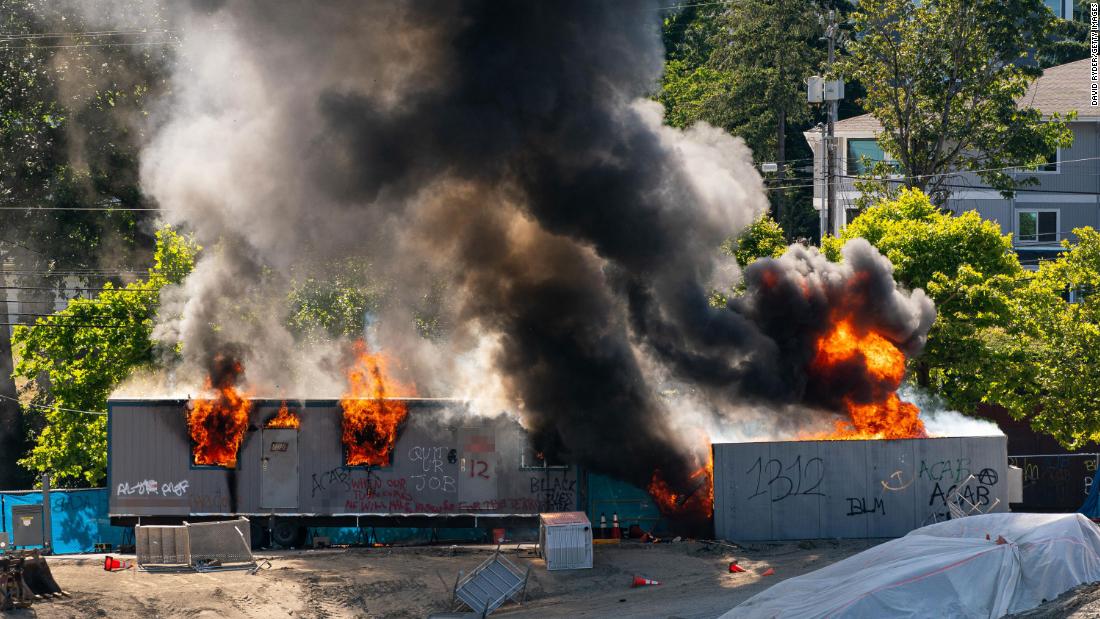 The authors wrote that tactics employed by right-wing extremist groups, such as the use of memes and codewords to share ideas and organize offline activity, are also being used by extremist groups on the left.

But there is now evidence to support that anarchist and socialist militant groups have also used internet platforms to plan and coordinate real-world attacks, the authors of the NCRI report write. Notably, researchers say leftist extremist networks organized and coordinated a campaign on July 25 in cities including Seattle and Portland, where riots and property damage were later reported.

Though the report’s findings are preliminary, the researchers warn that the proliferation of extremist rhetoric on the left is also something that policymakers and authorities need to pay attention to.

“This is a structure that has been operating in plain sight,” Joel Finkelstein, director of NCRI and the report’s corresponding author, told CNN. “We don’t know how big it is yet. We don’t know how interconnected it is. What we’ve learned from our research is that it exists.”

The authors, who have previously researched threats against law enforcement from the Boogaloo movement, analyzed more than 10 million social media posts on platforms including Twitter and Reddit.

They found that incendiary terms and slogans were being used in memes and as codewords during the social justice protests and unrest across the nation.

Online, such slogans and memes appeared with calls to incite violence, the authors wrote. In the real world, they were spray-painted onto government buildings and statues as a symbolic means of ousting state authority and marking territory, the report noted.

Anti-police comments increased by nearly 300% on Reddit and 1,000% on Twitter in the aftermath of George Floyd’s killing, the report said.

The social media activity referenced by the researchers is separate from non-violent slogans associated with the Black Lives Matter movement, such as calls to defund or abolish police — as many people who use such slogans are not attempting to instigate violence, Finkelstein noted.

“We’re trying to understand the dense core of militant actors who are actively using the terms in order to reliably generate violence,” Finkelstein said. “Our goal is to really separate that hard spear tip out from the rest of this as much as possible.”

Among those actors, the authors observed “dehumanizing memes and cartoonish calls for violent insurgency” on fringe online forums. Some memes depicted law enforcement officers being shot or police vehicles burning, while others included tactical information promoting the use of 3D-printed weapons and encrypted communication.

The most concerning evidence of far-left extremist activity came on July 25, Finkelstein said. “Anarchist networks” planned, promoted and executed rallies in four cities. During that time, cities saw reports of rioters throwing explosives and projectiles at police and destruction of property, the report stated.

The authors noted that the use of lasers, projectiles and explosives “showed remarkable uniformity” across cities and that “memes and realtime interactivity between local anarcho-socialist online feeds showed strong signs of interaction with mob activity in several of these instances.”

The growth of extremist groups on the left has been rapid, Finkelstein said. And despite his extensive research on extremist movements, he said the shared tactics between right-wing extremists and far-left ones came as a surprise.

A spokesperson for Twitter told CNN the company was still “actively investigating” this type of activity on its platform.

“We welcome the chance to collaborate with external stakeholders on identifying and taking action on attempts to manipulate the conversation on Twitter,” the company said in a statement.

Reddit said it had been banning groups that instigate violence across the spectrum.

“Reddit’s site-wide policies prohibit content that promotes hate, or encourages, glorifies, incites, or calls for violence against groups of people or individuals,” a spokesperson for Reddit said in a statement. “In accordance with this, we have been proactively banning extremist groups devoted to violence across the political spectrum.”

“Additionally, we have dedicated teams that enforce our site-wide policies, proactively go after bad actors on the site, and have built internal tooling to detect and remove policy-breaking content.”

Rep. Denver Riggleman, a Republican representing Virginia’s 5th district who has condemned white supremacist groups and conspiracy theorists such as QAnon, said that the issue ought to be studied by a bi-partisan working group.

“The ‘crazy virus’ will spread just like the coronavirus,” he told CNN. “We do not want it to spread faster.”

Rep. Max Rose, a Democrat from New York’s 11th District and chair of the Homeland Security Subcommittee on Intelligence & Counterterrorism, also said the threat should be taken seriously.

“This important report highlights those who are targeting our police and looking to cause significant property damage,” Rose, who has led efforts to address violent extremist groups, said in a statement to CNN.

“We must stay vigilant in rooting out violent groups across the ideological spectrum that are organizing, recruiting, and radicalizing in efforts to upend society and threaten human lives.”

Activists and protesters have expressed frustration about violent activity that has broken out at demonstrations in some cities, saying that it detracts from their overall goals of police reform and racial justice. It’s a sentiment that the report’s authors nod to as well.

“Even as these sophisticated groups recruit members in uprisings, activists are voicing concern that protests are being increasingly overtaken by violent resistance to police and becoming less about the important work of social justice reform and racial equality,” the researchers wrote.

The report also comes as President Donald Trump is conflating peaceful protests against police violence and systemic racism with incidents of looting and property destruction in a bid for reelection — despite a recent report that found about 93% of racial justice protests across the nation have been peaceful.
The Trump administration has portrayed Antifa and anarchists as a top threat to the US, with the President tweeting this summer that the US will designate Antifa as a terrorist organization.
Trump has also frequently downplayed threats from white supremacists, even though a recent assessment from the Department of Homeland Security stated that white supremacists will remain the most lethal threat to the US through next year.