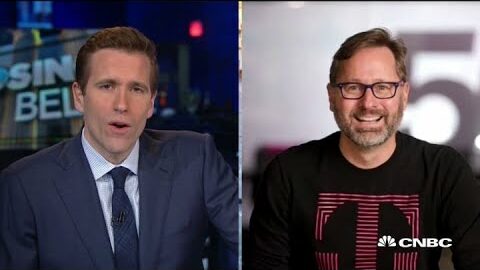 T-Mobile didn’t make it into Apple’s big iPhone event today. But CEO Mike Sievert took to Twitter and spoke to CNBC to let folks know who is leading the 5G race.

Apple thrust 5G technology into the spotlight at its big iPhone 12 unveiling event Tuesday, showing off the first iPhones with 5G capability. Apple CEO Tim Cook said 5G will improve download and upload speeds, provide higher quality gaming experiences, and reduce latency, among other benefits. He also invited Verizon CEO Hans Vestberg on stage at the virtual event to talk about the benefits of the carrier’s 5G network, which is available nationwide today.

Sievert’s interview with CNBC after the event was apparently a last-minute addition. Asked if he was envious that CNBC had Vestberg on air earlier, Sievert said no.

“We’re just celebrating here at T-Mobile today. This is just a huge day for our company and our industry,” he said.

Sievert described the iPhone launch event as the “firing gun on 5G” and said T-Mobile has an edge because of its mid-band strategy. 5G features three different radio signals: low, mid, and high band frequencies.

Just laid out the REAL 5G iPhone story on @CNBC and that story is midband 5G.

Dedicated 5G midband is what’s going bring the #iPhone12 to life AND what’s going to transform how you use your phone over the next decade … and @TMobile is the only one that’s got it🙌🏻 pic.twitter.com/pOc7GnVImp

Fierce Wireless reported that T-Mobile’s mid-band 5G “offers a tantalizing combination of speed and range unavailable from AT&T and Verizon.” The company’s blockbuster acquisition of Sprint in April helped it acquire much more mid-band 5G, which Sievert called “transformational” because of its speed capabilities.

Sievert, who took over for John Legere earlier this year as CEO, said Tuesday that mid-band is “where the real 5G game will be played over the next decade.”

“We believe that it’s all going to come down to network, and we have the opportunity to lead in network in the 5G era, the way Verizon did in the 4G era,” he noted. “This is our moment. We have more low and mid-band spectrum than AT&T and Verizon combined, and they know they’re going to have to do something about that.”

T-Mobile’s stock was up more than 1% Monday while shares of Verizon and AT&T fell slightly.

The Wall Street Journal noted that it’s unclear if customers “will flock to a 5G phone without a must-have application or service to help them see the appeal of the new technology,” and noted that 5G coverage is not yet fully activated for all consumers.

CNET reported that the iPhone 12 is priced $30 higher on T-Mobile and Sprint than on Verizon or AT&T. We’ve followed up with T-Mobile for more details.

T-Mobile reported $17.7 billion in revenue and earnings per share of $0.09 in its most recent quarter. It also announced in August that it had leapfrogged AT&T and is now the nation’s No. 2 wireless provider. T-Mobile now has 98.3 million customers with the addition of Sprint subscribers, ranking second in the U.S. behind Verizon.