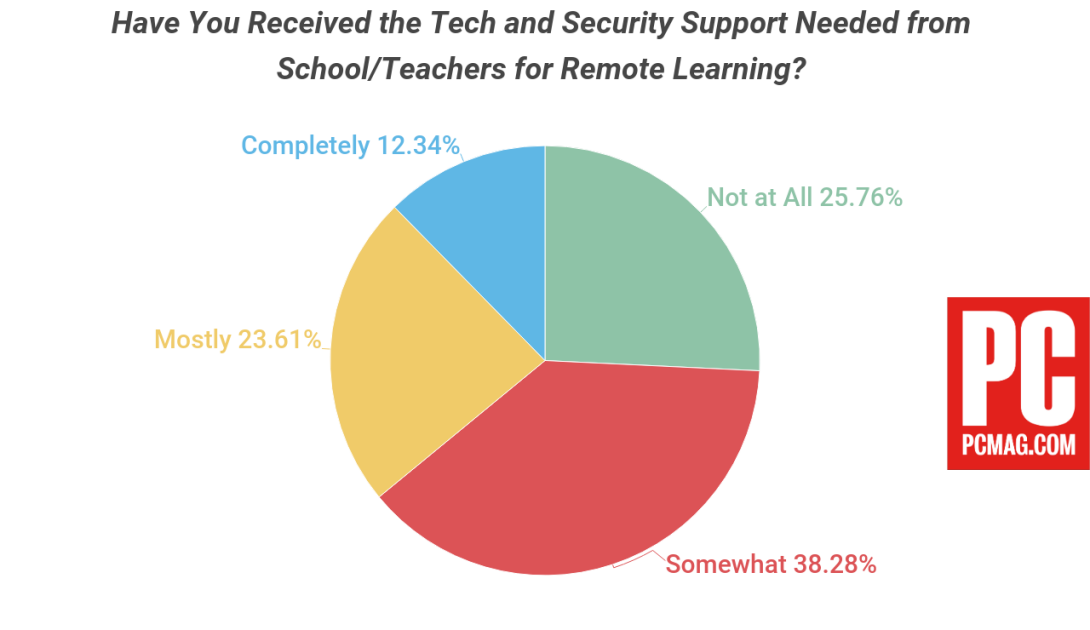 Distance learning is the new reality thrust upon most US parents and guardians by the COVID-19 pandemic and quarantine. Before the new 2020-2021 school year kicked off, we conducted a survey to ask people what they’ve been dealing (and struggling) with when it comes to schooling from home. We heard from 805 parents with kids in middle and intermediate levels, high school, and/or college during the survey period from August 3 to August 14, 2020. Of those respondents, 605 had children who took virtual classes at home at some point before the survey.

Of parents we surveyed, 52.9 percent had kids in kindergarten to 6th grade; 59.3 had kids in grades 7 to 12; and 22.7 percent had college kids at home. (Since some respondents had more than one child, the percentage numbers go over 100.) The chart below shows the actual numbers of kids.

As to how much time parents spent overseeing and even teaching under this new educational paradigm, only 11.1 percent said they didn’t supervise at all. At the other end, 15.7 percent oversaw everything. The majority in the middle said they somewhat or mostly checked on the kids. Only 69.6 percent of kids had a dedicated space in which to do their remote class. Click the arrows below to see the charts.

Which learning management system and which virtual meeting system is used for virtual class is out of most parents’ hands, as school systems generally make that choice for them. One respondent noted that their school is using far too many tools, including Zoom, Canvas (our Editor’s Choice, along with Schoology), and Backpack. This has become confusing, as the schools change platforms and programs with little notice. Another claimed their son has to log into five different systems to do his work.

Of course, it’s not all about the tech. We wanted to know whether kids are getting the support they need on their devices and whether parents felt the security needs for the devices were met. Only 12.3 percent said they were completely supported by their local schools and teachers. The vast majority gave a non-resounding “somewhat” as an answer (38.3 percent) and an upsetting quarter of all parents said they didn’t have enough support.

We asked an open-ended question about the ongoing pain points parents are experiencing with kids learning at home. That’s where the gloves really come off.

One commenter said, “Do any of the question writers [of this survey] have children? You are asking about tech stuff, which is a big problem—but it is the LEAST of our worries. [We have] Isolated, lonely, sad children who need friends and teachers.” [Editor’s Note: Yeah, we’re PCMag, so we’re going to ask about the tech. And, yes, we do have kids.]

Another mentioned having a child with ADHD who is prone to “getting lost online…my daughter needs the kind of redirection and supervision this mode of teaching is not particularly good at.” Others mentioned schools having teachers scheduling overlapping classes, with frustrated commentary such as, “Unless my daughter is cut in half she can not be in two different class times at once.”

Some parents blamed the teachers for the learning problems; other blame the need for the teachers to get the training they need to make this work for the students. One said, “Some teachers are better equipped to handle online platforms. Some are not savvy themselves…they seem to struggle.” Another flatly stated, “Teachers have no clue…how to have online classes.”

One respondent claimed ongoing virtual schooling is disastrous, at least for teens, because “they think they know everything and have it all covered…they are not mature enough to handle this on their own.” And one more said the lack of interaction with peers is where the technology really fails.

We also asked whether there was an upside to virtual classrooms. Some parents said their children were less stressed. Some appreciate the flexibility. Others believe there are no positives at all. But one statement was made that no one can really argue with: “Not getting COVID-19.”

We’ve no doubt that even though it may be hard, this new school year will be much easier for parents, students, and teachers to navigate than the emergency situation from last March to June. More schools have an actual plan now. If you need some hands-on methods to make the at-home school experience better, read 11 Practical Tips for Successful Schooling at Home.