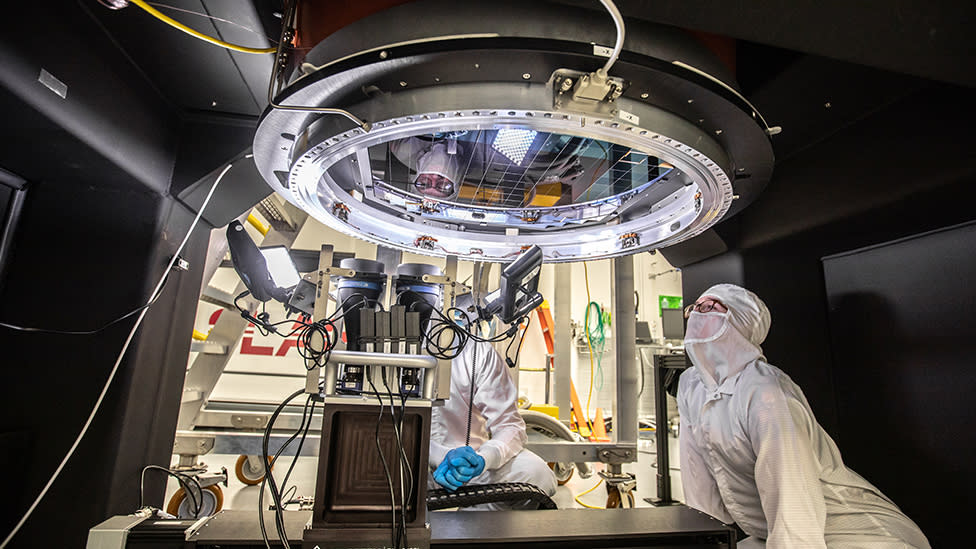 How do you test the new sensor for the world’s largest digital camera? You take a picture of broccoli, of course.

This might sound bizarre but the intricate shapes found in the Romanesco version of this plant are a good check that you’re capturing lots of detail.

And for the camera that’s to be fitted to the Vera Rubin Observatory in Chile – performance is everything.

This 3.2 gigapixel device is going to help unlock some of the key outstanding questions in astronomy.

Who knows? It might even get us closer to understanding those cosmic head-scratchers “dark energy” and “dark matter” which appear to be controlling the evolution of so much of what we see when we look up.

The VRO will do this by making what can only be described as a stupendous map of the sky.

The observatory is going to survey its entire field of view every few nights for 10 years.

Not only will Rubin clock the positions of billions of stars and galaxies, but it will also catch anything that moves or flashes. It will be a treasure trove of data that’ll keep scientists busy for decades.

But to undertake such a survey, the VRO needs a special camera – like the one now being assembled at the SLAC National Accelerator Laboratory in California.

At its heart is a 64cm-wide focal plane made up of 189 individual sensors, or charge-coupled devices (CCDs). Getting them all securely and precisely mounted and their complex electronics talking in unison has been an immense challenge.

But the pictures released on Tuesday demonstrate the task has been completed successfully.

The SLAC team isn’t yet in possession of all the camera’s components, such as its lenses, so it used a 150-micron pinhole to project images on to the CCD array.

The brassica plant was deliberately chosen for its very elaborate surface structure. Innumerable lumps and bumps. A tonne of detail to pick out.

Just how good are the pictures? If you wanted to display them full size at full resolution, you’d need 378 4K ultra-high-definition TV screens.

“If we’re to complete this survey of the sky, we’re going to need a big telescope and a big camera,” explained VRO director Steve Kahn.

“This three billion pixel camera will cover about 10 square degrees of sky; and to give you a feel for that, it’s about 40 times the size of a full Moon. And we’ll be taking pictures across the sky essentially every 15 seconds,” he told BBC News.

“We’ll get very deep images of the whole sky. But almost more importantly, we’ll get a time sequence. We’ll see which stars have changed in brightness, and anything that has moved through the sky like asteroids and comets.”

Vera Rubin is principally an American project, but with a strong international dimension.

UK scientists are expected to play a big part in the analysis of data, having a lot of expertise in sky survey work.

The VRO has been in the news recently because of its potential vulnerability to the satellite mega-constellations that are now being launched.

Large numbers of low-orbiting telecommunications spacecraft streaking through the camera’s field of view could ruin its images.

The largest of the new mega-constellations – at present – is the one being lofted by the entrepreneur Elon Musk and his SpaceX company.

Prof Kahn said the VRO was engaged with Mr Musk and that engineers were working on solutions to limit the interference.

The observatory director said better engagement was now needed from the British-Indian-owned OneWeb company, however.

This network’s satellites could eventually pose a bigger problem than even SpaceX because the spacecraft are higher in the sky and will stay in the VRO’s field of view for much longer.

“The UK astronomy has assembled a large collaboration so it might be helpful for them to work on getting OneWeb to cooperate,” Prof Khan told BBC News.

“These problems are not completely insoluble but you need reasonable cooperation.”

It’s expected the VRO’s camera will start taking images of the sky – as opposed to heads of broccoli – in late 2022.