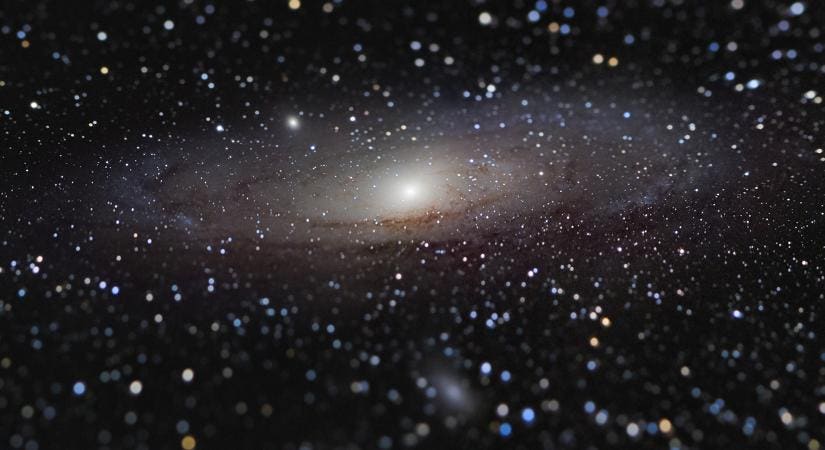 One of the most prestigious astrophotography awards of all has gone to French photographer Nicolas Lefaudeux for his “illusory” image of our neighbouring Andromeda Galaxy.

Well known in astrophotography circles for his stunning HDR techniques and particularly for his incredible image of the 2019 total solar eclipse, Lefaudeux will collect the $13,000 top prize in and the Royal Observatory Greenwich’s title of Insight Investment Astronomy Photographer of the Year 2020.

His image will take pride of place in the exhibition of winning photographs opening at the National Maritime Museum in London on October 23, 2020.

What is the winning image?

Titled “Andromeda Galaxy at Arm’s Length?”, Lefaudeux’s image shows the Andromeda Galaxy seemingly at arm’s length among clouds of stars. “I was really not expecting to be the overall winner,” said Lefaudeux to me yesterday. “I had some hopes for being placed in the galaxy category, as I liked the sense of depth given to the galaxy, but I was over the Moon when I got the news of being the winner!”

The image triumphed both the “galaxies” category and as the overall best image.

Where was it taken?

Lefaudeux took the image at his home in Forges-les-Bains, Île-de-France. “It’s suburban and far from perfect, but the streetlights are turned off after midnight,” said Lefaudeux. “Taking the image itself took a few hours of exposure, but it took much longer than that to get the effect I was looking for.”

“The image itself was made with rather simple gear—a refractor telescope and a DSLR cameras under a suburban sky, and not with expensive hardware under remote dark skies,” said Lefaudeux. “I think this is a great encouragement for everyone to experiment new ideas on astrophotography.”

How was it taken?

It’s an illusion created by a tilt-shift effect. To execute this fabulous photo, Lefaudeux 3D-printed a part to hold the camera at an angle at the focus of the telescope. The blur created by the defocus at the edges of the sensor gives this illusion of closeness to Andromeda. “I was looking for the right balance between the sharpness of the galaxy and bokeh on the surrounding stars,” said Lefaudeux. “I designed and 3D-printed a part to hold the sensor at an angle with the telescope axis, but it wasn’t straightforward—you need a refractor telescope to get a nice bokeh.”

What did the judges say?

“To most of us, our closest neighbouring galaxy Andromeda can also feel so distanced and out of reach, yet to create a photograph that gives us the impression that it is just within our physical reach is truly magical,” said competition judge Ed Robinson. “It’s somewhat appropriate as we adjust after such socially distanced times“.

What is the Andromeda Galaxy?

Known as M31 to astronomers, the Andromeda Galaxy is the closest large galaxy to our own Milky Way. A spiral galaxy around 2.5 million light-years from us, it contains around a trillion stars.

The Milky Way and the Andromeda Galaxy are on a collision course, and will begin to merge with each other in about four billion years.