Study Shows O. Megalodon Was The Largest Shark To Ever Swim In Our Planet’s Oceans 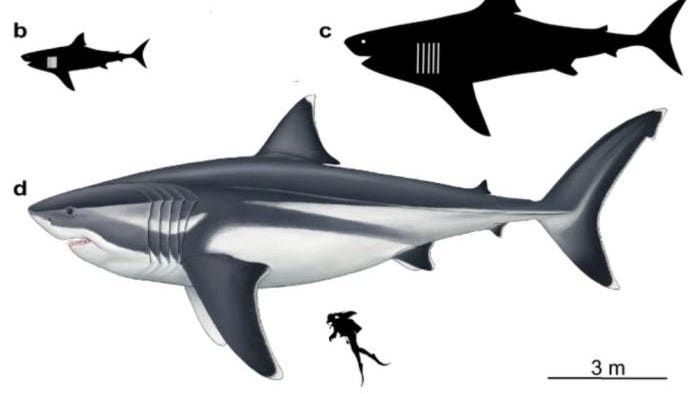 According to a new study, the megatooth shark Otodus megalodon was the largest shark to ever swim in our planet’s oceans. O. megalodon is an extinct species of shark that lived approximately 23 to 3.6 million years ago. The exact cause of its extinction is still debated, likely a combination of environmental change and competition with smaller shark species played a role.

Despite its fame in pop-culture, surprisingly little is known about the life-appearance of the megalodon. Sharks have a cartilaginous skeleton that will quickly decay after death. Only their hard teeth survive the fossilization process. A recent study published in the journal Scientific Reports discussing the body size of O. megalodon, concluded that a full-grown specimen could reach about 50 feet (or 15 meters) in length. A new study published in the journal Historical Biology shows how unique the size of this species was.

Kenshu Shimada, a paleobiologist at DePaul University in Chicago and lead author of the study, compiled a database of 70 shark species and they inferred size based on their fossil record. The study used measurements taken from specimens of all 13 species of present-day macrophagous (non-planktivorous) sharks to generate mathematical functions describing the proportion relationships between teeth dimensions, jaw length, and body size. Applying the functions to fossil teeth, the researchers reconstructed the body size distribution of extinct shark species over geologic time.

The study shows that non-planktivorous sharks, including extinct forms, have a general size limit of 23 feet (7 meters). Only a few present-day plankton-eating sharks, like the whale shark and basking shark, can reach lengths of 26 to 32 feet (8 to 10 meters). The study also shows that sharks got on average bigger in the last 65 million years. Even so, with a maximum size of 46 to 50 feet, O. megalodon was an exceptionally large animal, likely the maximum size sharks can get.

It is not entirely clear what adaptions enable sharks to grow bigger in size, but warm-bloodedness – the ability to maintain a relatively constant internal temperature – or oophagy – the practice of early-hatched embryos feeding on eggs still inside the mother’s womb – has previously been proposed to have led to gigantism.

Warm-bloodedness is documented in the great white shark Carcharodon carcharias, often measuring more than 19 feet (or 6 meters) in length. Muscle movements keep its body temperature always over water temperatures. Cannibalistic egg-eating behavior of embryos still inside the mother, making it possible to give birth to larger-sized newborns, maybe prooves advantageous in evolutionary terms and likely repeatedly evolved in shark lineages. Based on growth models, a newborn megalodon was already 9 feet (3 meters) long.