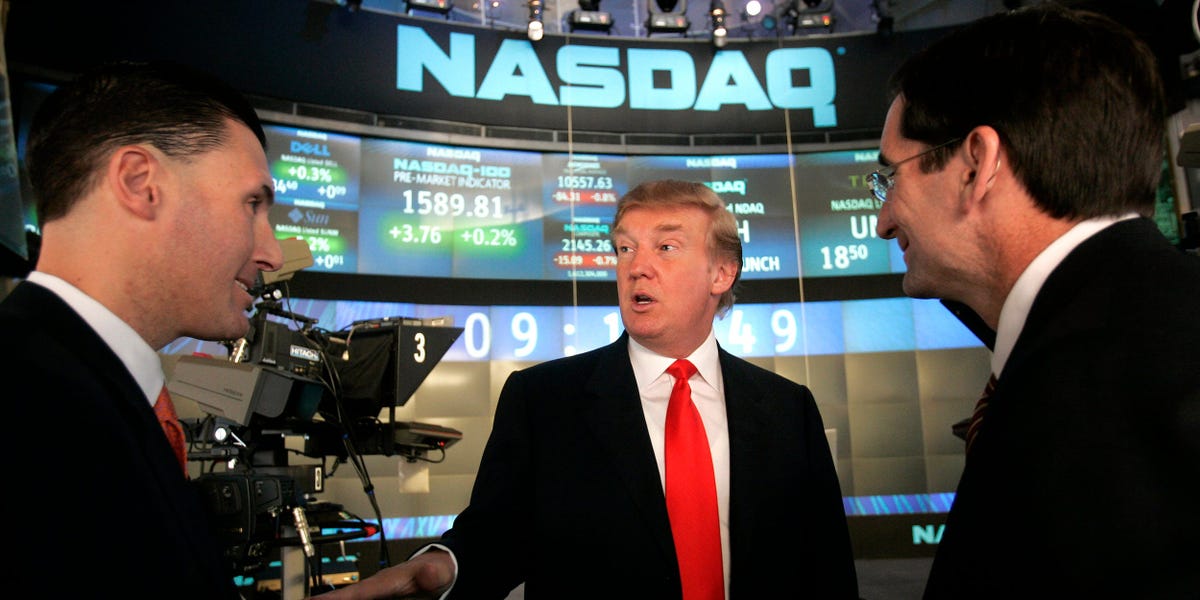 US equities tumbled on Friday after President Donald Trump and First Lady Melania Trump announced they both tested positive for COVID-19.

Trump was tested late Thursday night after close aide Hope Hicks tested positive for the virus earlier in the week. The White House physician did not say whether the president was showing symptoms, or how long he had been infected. The diagnosis is poised to halt Trump’s campaign events mere weeks away from the US presidential election.

All three major stock indexes sank in the morning in choppy trading. While some sectors pared most losses through the day, falling tech giants slammed benchmarks and led the Nasdaq composite to underperform its peers. Utility, energy, real estate, and industrial stocks all posted gains.

Here’s where US indexes stood at the 4 p.m. ET market close on Friday:

Read more: BANK OF AMERICA: Buy these 29 high-quality value stocks primed to cash in on the economic recovery

The Cboe Volatility index — or VIX, which is commonly referred to as the stock market’s fear gauge — soared as much as 12% before cooling through the morning.

Airline and cruise stocks — some of the most common “reopening plays” — tumbled as Trump’s diagnosis slammed hopes for a swift recovery.

Safe-haven assets including the yen and Treasurys initially gained before investors reined in defensive bets.

“Market swings can be unsettling, and there’s a lot to think about with today’s headlines. However, history has proven to us repeatedly that it’s best to wait them out,” Lindsey Bell, chief investment strategist at Ally Invest, said. “After the last eight months, you should be a pro at navigating rough waters like this.”

Read more: A fund manager who’s beaten 99% of her peers over the past 5 years told us why she remains bullish on growth stocks despite the recent sell-off — and listed her 3 favorite stocks for continued gains in the decade to come

Market participants also faced a worse-than-expected reading of the labor market Friday morning. American businesses added 661,000 nonfarm payrolls in September, according to the Bureau of Labor Statistics. The reading fell below the 859,000 additions expected by economists surveyed by Bloomberg. The unemployment rate fell to 7.9% through the month, beating the consensus estimate of 8.2%.

Though the government’s monthly report marked a fifth straight month of job additions, it also revealed a slowing pace of recovery for the beleaguered labor market.

The millions of Americans still unemployed also find themselves without key assistance from the government. House Democrats advanced their own $2.2 trillion measure late Thursday, aiming to revive a $600 per week expansion to unemployment benefits and send another round of direct payments.

Read more: Peter Mallouk built a $34 million RIA into a $50 billion giant. The wealth-management CEO pinpoints 3 opportunities his firm is implementing in client portfolios, and shares 2 tips on how to accumulate wealth.

House Speaker Nancy Pelosi indicated she and Treasury Secretary Steven Mnuchin made some progress in reaching a  compromise on Friday. Yet Senate Majority Leader Mitch McConnell has indicated that Senate Republicans won’t back the bill.

The US dollar initially slumped on the news of Trump’s diagnosis before retracing losses.

Oil prices continued to slide below $40 per barrel amid the chaotic trading. West Texas Intermediate crude sank as much as 5.4%, to $36.63 per barrel. Brent crude, oil’s international benchmark, fell 5.2%, to $38.79 per barrel, at intraday lows.

US Investing Championship hopeful Evan Buenger raked in a 131.9% return through August. He shares the distinct spin he’s putting on a classic trading strategy that’s led to his outsize returns.

Stock bullishness across Wall Street is back to pre-pandemic levels — and will likely spike even more after the US election, BofA says

Get the latest Gold price here.