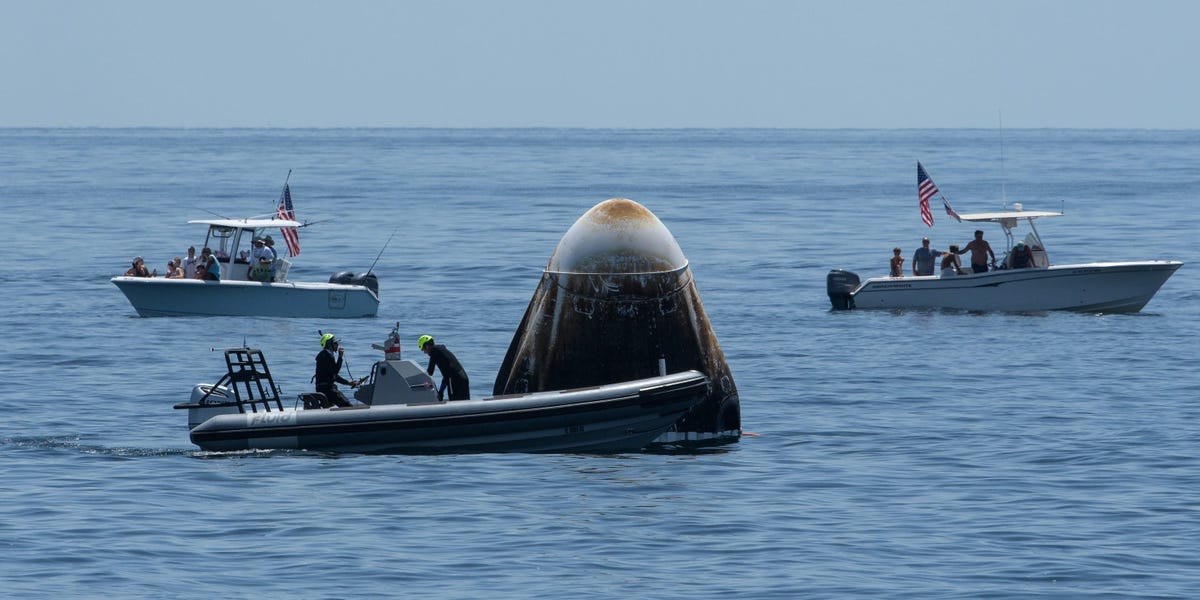 As SpaceX prepares to launch its second astronaut crew, the company has made a plan to keep curious boaters away when its spaceship lands back on Earth.

SpaceX’s first launch for NASA rocketed astronauts Bob Behnken and Doug Hurley into Earth’s orbit aboard the company’s Crew Dragon spaceship. They stayed on the International Space Station for two months, then climbed back into the capsule and weathered a fiery plummet into the Gulf of Mexico in August.

The mission was a demo, and each step went according to plan — until the end. Once the toasted capsule was bobbing in the ocean, NASA and SpaceX encountered a swarm of onlooker boats surrounding the spaceship. Even Behnken and Hurley’s colleagues on the space station could see the beeline headed for the ocean landing site.

It was an unexpected obstacle, and some of the spectators passed alarmingly close to the capsule (including one flying a Trump flag).

“That just can’t happen like it did before,” Hurley said of the boaters in a press conference a few days after his return.

When bystander vessels get that close to a spaceship that has just plowed through Earth’s atmosphere, it can be dangerous for both the astronauts and the boaters. That’s because the capsule was shrouded in low levels of a poisonous gas called nitrogen tetroxide. SpaceX recovery teams had to wait for the gas to clear before they removed Behnken and Hurley from the capsule.

“What is not common is having passers-by approach the vehicle close range with nitrogen tetroxide in the atmosphere. That’s not something that is good,” NASA Administrator Jim Bridenstine told reporters after the splashdown. “We need to make sure that we’re warning people not to get close to the spacecraft in the future.”

The demo mission was meant to identify potential problems like that so SpaceX can correct them ahead of its contracted operational missions for NASA. In response to the boat issue, the company has promised to beef up security and prevent boaters from crowding its spaceship after the next mission, called Crew-1, returns to Earth in 2021.

NASA enlisted the US Coast Guard to clear the water area ahead of the August splashdown, but it did not seem to have enough boats or enforcement power.

In a statement to CBS, the Coast Guard said it warned boaters multiple times with radio alerts and physical warnings, yet lacked an order to legally enforce a hazard zone.

“Numerous boaters ignored the Coast Guard crews’ requests and decided to encroach the area, putting themselves and those involved in the operation in potential danger,” the statement said.

The next time around, SpaceX and NASA plan to set up an enforceable no-boat perimeter around the spaceship’s splashdown site.

“We closely coordinated between NASA and SpaceX with the US Coast Guard to establish a 10-mile keep-out zone for any boaters, to make sure that the recovery is safe and that our crew is safe, the astronauts are safe, and the public itself is safe,” Hans Koenigsmann, SpaceX’s vice president of build and flight reliability, told reporters in a call on Tuesday. “We’re going to have more boats on the next go-around and make sure that the area’s really clear of any other boats.”

The Crew-1 mission is slated to carry NASA astronauts Mike Hopkins, Victor Glover, and Shannon Walker and Japanese astronaut Soichi Noguchi. After their planned October 31 launch, the crew is scheduled to stay on the space station for six months — a full-length mission.

It’s the first of six round-trip Crew Dragon rides that NASA has contracted to bring astronauts to and from the space station. The effort is set to restore the US’s human spaceflight capabilities after nine years of relying on Russian Soyuz rockets.

“This is another milestone, a critical milestone, in the development of our ability to launch American astronauts on American rockets from American soil,” Bridenstine said on Tuesday. “These are very exciting times.”