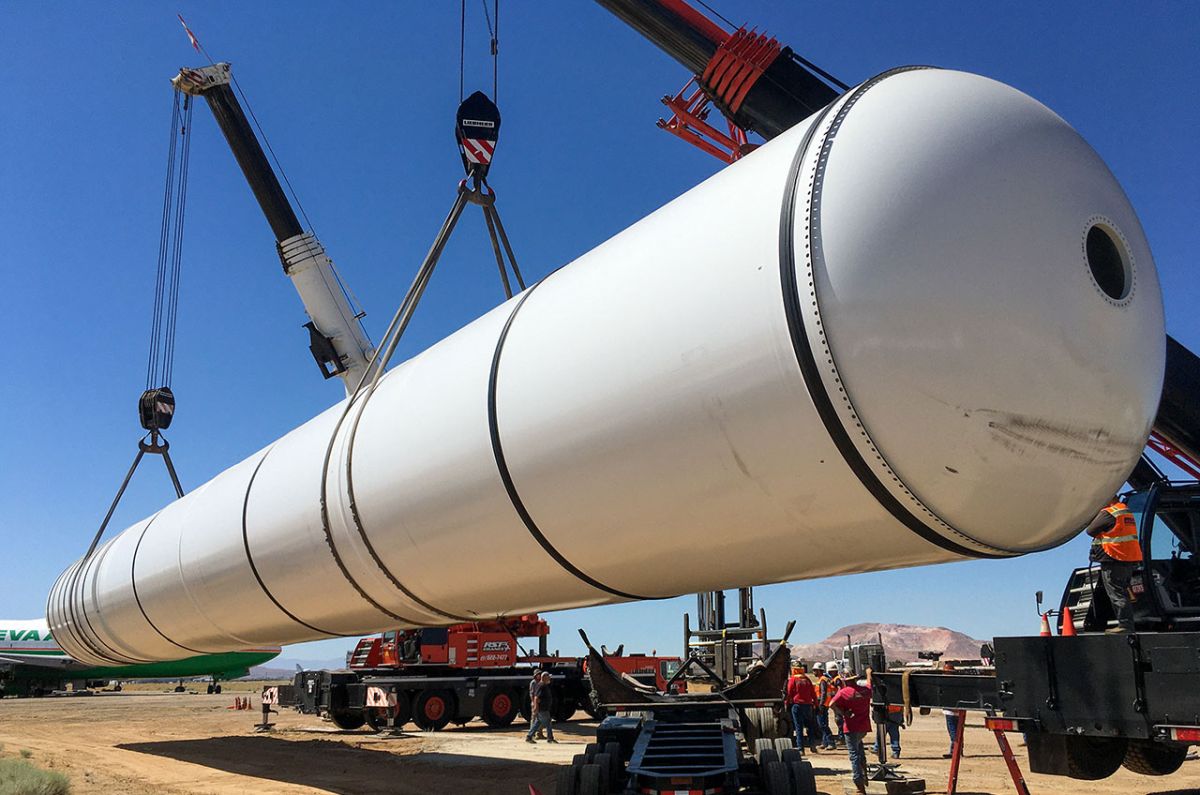 Two rocket boosters made from parts that launched on more than 80 space shuttle missions are now parked outside of Los Angeles, having moved a step closer to standing up the display of a retired NASA orbiter.

The twin solid rocket motors, which Northrop Grumman pledged to donate for the California Science Center’s exhibit of the space shuttle Endeavour in 2017, were delivered over the past couple of weeks to the Mojave Air and Space Port, where they are being temporarily held in outdoor storage. The inert motor cases, which Northrop Grumman described as being “structurally representative” of the solid rocket boosters used during NASA’s space shuttle program, were trucked in from the company’s Promontory, Utah test facility after being prepared for their exhibit.

“We are excited to share a piece of our more than 30-year legacy with future generations to help inspire a new era of explorers,” Charlie Precourt, Northrop Grumman’s vice president for propulsion systems and a former space shuttle commander, said in a statement.

Since debuting Endeavour on horizontal display in 2012, the California Science Center has planned to exhibit the winged spacecraft vertically, as if it was back on the launch pad, stacked with a fuel tank and solid rocket boosters. Towards that goal, the science center originally obtained a pair of boosters assembled from a mix of flight-worthy, test and mock parts that had been on display at the Kennedy Space Center Visitor Complex in Florida.

But after obtaining NASA’s final flight-worthy external tank, ET-94, in 2016, and conducting a review of the display plans, it was decided that a set of flight-worthy boosters were also needed to meet seismic and structural standards. Dennis Jenkins, a veteran shuttle engineer and director of the science center’s project to display Endeavour, made the request to Northrop Grumman (at the time, Orbital ATK, which Northrop Grumman acquired in 2018), which led to the donation.

“As for the non-motor parts of the booster, we sourced a set of flight-representative aft skirts and frustums from NASA surplus and a set of forward skirts that were used for tests for NASA’s Space Launch System (SLS) program that are currently in Utah,” said Jenkins. “Northrop Grumman and NASA are providing most of the smaller parts, like booster separation motors, from surplus.”

When the boosters’ donation was first announced, the California Science Center was targeting 2019 for the opening of Endeavour’s vertical display in the planned Samuel Oschin Air and Space Center. Although it now has all of the components for the space shuttle, the science center is still waiting to break ground on the new building.

“Honestly, we’re still working on the fundraising. We’ve made good progress, but we are not quite there yet to start,” Jeff Rudolph, president and CEO of the California Science Center, told collectSPACE.com. “We are optimistic that we will be able to start construction in the next year.”

Once the project is funded and the Oschin Air and Space Center is ready for Endeavour, the two solid rocket motors that are now in Mojave will be brought to the science center with the same pomp and circumstance that the orbiter and external tank previously received.

“These are big, but they’re a lot easier to move. It will still be a pretty cool thing to watch them come through the streets,” said Rudolph.

The 149-foot (45 meter) solid rocket boosters produced most of the thrust needed for the space shuttle’s first two minutes of flight. After expending their propellant, the twin boosters separated from the vehicle and descended under parachute to a splashdown for their recovery and reuse.

Northrop Grumman is using most of its leftover shuttle-era solid rocket motor hardware to support NASA’s SLS, which is being built to launch astronauts to the moon. On Sept. 2, the day after the second of the two motors for Endeavour’s exhibit arrived in Mojave, the company conducted a ground test with an SLS flight support booster in Utah, using parts previously flown on 43 shuttle launches.

Endeavour’s well-used boosters include components that were part of 32 static ground tests and 81 space shuttle missions. The oldest cases, located at the top of each assembled solid rocket motor, helped launch STS-5, the fifth flight of the orbiter Columbia, in 1982. The most recent use was for STS-123, the 21st launch of Endeavour, in 2008.

Related: NASA’s space shuttles: Where are they now?

The donation of the boosters builds upon a more than decade-long partnership between Northrop Grumman and the California Science Center. The company has sponsored the California State Science and Engineering Fair and several of its employees volunteer each year to advance STEM education by supporting various events. Northrop Grumman has also supported the center’s annual Discovery Ball.

Endeavour will be the only vertical display and second full stack exhibit of a space shuttle, the latter after the Pathfinder fit-check orbiter mockup at the U.S. Space & Rocket Center in Alabama.

Click through to collectSPACE for more photos of the delivery of the solid rocket motors for the California Science Center’s display of the space shuttle Endeavour.