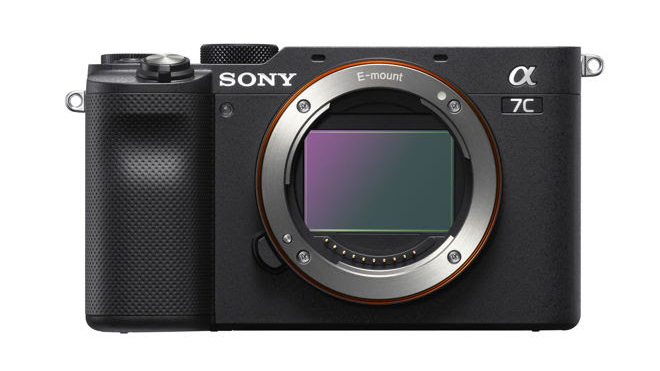 Sony is expanding its a7 full-frame camera series with a brand new model type, the first we’ve seen since the launch of first a7S model, way back in 2014. Called the a7C, it’s a slimmer, more affordable version of the best-selling a7 III, but one that comes with very few compromises.

The a7C swaps out the centered viewfinder, SLR-style frame used by other a7 models in favor of the rangefinder-style design that Sony has used in its APS-C a6000 series for close to a decade. It means that the camera has an EVF that’s a little smaller to the eye (0.59x, 2.36 million dots), but dropping the raised viewfinder hump goes a long way to making the entire package a little bit smaller.

Sony loudly touts the camera as the world’s smallest full-frame model, but there are some caveats—Sony is only comparing it with models that include stabilization, a mechanical shutter, and an EVF. The Sigma fp is actually a little smaller and lighter, but at 17.9 ounces and 2.8 by 4.9 by 2.3 inches, the a7C is not at all a heavyweight.

Aside from the smaller EVF, there are few compromises made to net a smaller, more affordable camera. Sony uses the same 24MP full-frame sensor as the a7 III, after all, and it’s powered by a newer processor and the better autofocus systems we’ve seen in more recent models. Face and eye detection, for both people and pets, are included, and Sony’s subject tracking is exceptional.

The body maintains dust and splash protection, and the chassis is a new magnesium alloy design. It drops a front control wheel, but you get top and rear dials, as well as a touch LCD that faces forward for vlogs and selfie shots. The body has a single memory card slot with support for UHS-II SDXC media.

In-body image stabilization is included. The a7C features a newly designed 5-axis system, one that’s been sized down to fit—the body may me about the same size as the stabilized a6600, but the full-frame sensor is twice as big. The IBIS system promises to keep 24MP images sharp and 4K video jitter-free.

Battery life is the best we’ve see from an a7 camera—it’s rated for 740 images and 225 minutes of video capture, and it does it using the same Z series battery used by other recent a7 cameras. The smaller EVF and other improvements in power management win the day here—Sony’s mirrorless cameras deliver double the battery power as many competitors.

There’s no flash, but you do get a hot shoe to mount an external flash or digital microphone, as well as the normal array of connections for video (micro HDMI, 3.5mm microphone and headphone) and a USB-C port for charging, data transfer, and webcam use. Dual-band Wi-Fi and Bluetooth are included.

Sony is offering a new compact flash, the HVL-F28RM at the same time. At just $250 it looks to be a solid value, and includes a radio transmitter to control other Sony flashes.

Likewise, there’s a new, svelte kit lens for the a7C. The FE 28-60mm F4-5.6 drops a little bit of zoom range when compared to the old FE 28-70mm F3.5-5.6 IS, and also drops stabilization, but promises to deliver sharper photos and the camera body takes care of the stabilization. At launch it will only be available to purchase along with the a7C, but Sony plans to sell it on its own next year.

I’ve not yet had a chance to use the a7C, but it’s certainly intriguing on paper. Photographers who have been turned off by the size of full-frame camera systems, opting for APS-C or Micro Four Thirds instead, will want to take a look. Likewise this should be one that’s a hit with the vlogging crowd—the forward-facing screen and IBIS system are good a good fit for video, and the full-frame sensor and lenses net shots with naturally blurred out backgrounds.

The Sony a7C will be sold as a body only or bundled with the FE 28-60mm lens. Color options include all black (pictured) or a version that’s mostly black, but with a silver top plate.