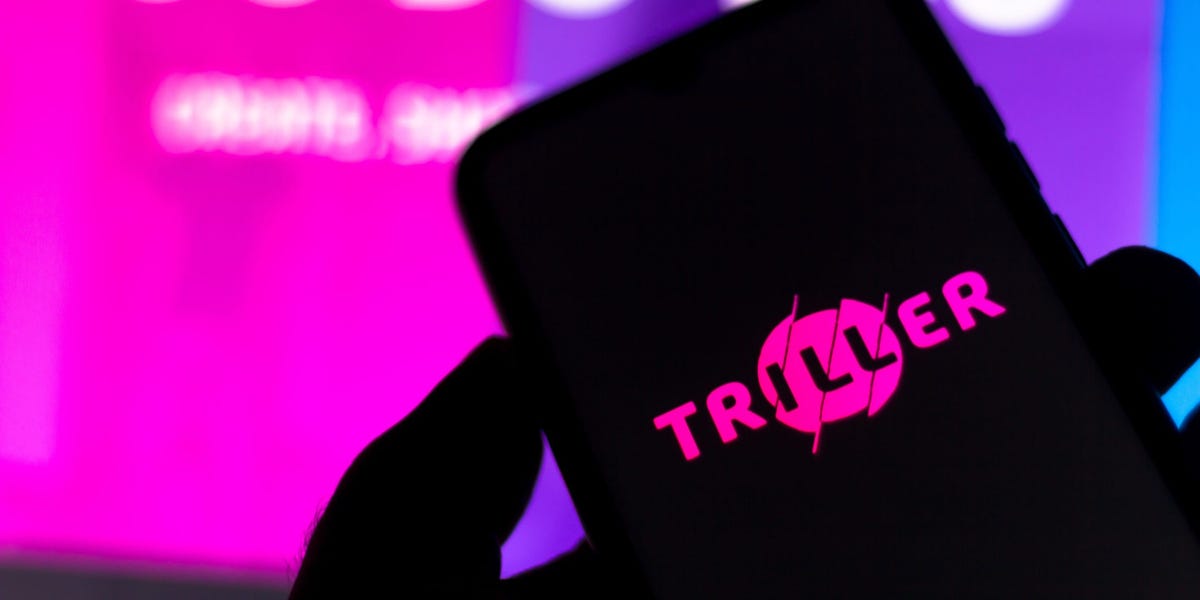 If you read the trail of statements made by Triller in recent weeks, the short-form-video app appears to be on top of the world.

“We’re definitely on a rocket ship,” Triller CEO Mike Lu said at TechCrunch Disrupt on September 15. “It’s a true exponential curve in terms of our usage, in terms of our growth, and we don’t see that slowing down anytime soon.”

As rival TikTok has been roiled by political turmoil, Triller appears to have thrived.

The US president joined the app in mid-August, and Donald Trump Jr. recently posted a Triller video to tell social-media users that “there’s an option that you can go to that’s an American company that’s not saving your data, that’s not going to eventually weaponize it against your children.”

In the past month Triller announced a monthly active user (MAU) count of over 100 million and that it had signed up TikTok’s biggest star, Charli D’Amelio, and her family.

It also put in a $20 billion bid to buy TikTok itself with London-based Centricus Asset Management. (A spokesman for TikTok initially responded by asking “What’s Triller?” when Bloomberg first reported the bid.)

But six former Triller employees, who spoke on the condition of anonymity for fear of legal reprisals from the company, told Business Insider they were wary of the user numbers Triller had announced based on past experiences with the company.

They pointed to October 2019, when the company announced that media mogul Ryan Kavanaugh’s Proxima Media was taking operational control of the startup.

Alongside its fresh round of funding, Triller said it had grown 500% organically year over year to 13 million monthly active users and 60 million total downloads.

Other platforms have had runaway growth in their early years, but it’s rare. Facebook went from 1 million users to 100 million users in its first four years; TikTok, which launched shortly after Triller, grew its monthly active user count 87% from December 2018 to December 2019, according to a court filing.

But a screenshot from one of Triller’s  app analytics tools, Localytics, showed just 2 million monthly active iOS users and about 484,000 monthly active users on Android devices. It was taken a few weeks after the company’s October press announcement and shared with Business Insider by a former employee.

Localytics provides apps with analytics to understand when, how long, and how frequently users visit their app, according to the company’s website. Localytics is used by companies such as ESPN, Fox, and The New York Times and on more than 37,000 apps and on more than 2.7 billion devices. Triller used Localytics to measure user activity via proprietary code added to its iOS and Android apps in addition to raw user data it collected from devices running its apps and from servers responding to network requests from those device.

Four of the six former Triller employees Business Insider spoke with confirmed that they had access to the Localytics dashboard and remembered Triller’s MAU count ranging between 1 million to 2.5 million at the time. The other two said they remembered the MAU count being about that 1-2.5 million range at the time, but did not name Localytics in particular.

Upland, which owns Localytics, did not respond to a request for comment for this story.

Triller had several ways of calculating its user base at the time. Some of the former employees said they had access to other user data sources, including Triller’s raw user data, and that those data sources indicated that the app’s monthly active user base was either roughly in line or lower than the Localytics numbers suggested.

“On all of those [internal] systems the numbers were more or less in sync, and never those numbers that they publicized,” one of the six former Triller employees said.

In a statement, Triller CEO Mike Lu said the former employees were “disseminating inaccurate information” to Business Insider and that “relying upon probably false information is concerning.”

None of the six former Triller employees understood exactly how the 13 million monthly active-user number in Triller’s October 2019 public statement was calculated, they said.

Triller did not explain its methodology for calculating the 13 million MAU number from its press statement after a request to do so from Business Insider.

Lu told Business Insider: “As for our users, we can validate each and every one of our 239M plus of them and have two separate third party analytics companies preparing independent analyses based on transparent data access.”

Apptopia estimated in August that Triller had 52 million lifetime installs compared to the company’s own reporting of 250 million all-time downloads around the same time, TechCrunch reported.

Apptopia later retracted its estimate after being put in touch with Triller through a mutual investor, TechCrunch reported, and hasn’t released an updated number.

A spokesperson for Apptopia told Business Insider that Triller’s threat of legal action was a “knee-jerk reaction from the Triller Team” that the company retracted.

“Triller was rather impressed with our analysis and has signed up to become a customer in an effort to have us help them get a better understanding of their competitive landscape,” the spokesperson said. “Triller agreed to share all of their real performance data with Apptopia, and we thought it would be better to first look at their real data, analyze it, ask questions, understand it, etc., prior to publishing anything and having a big impact on a fast-growing business.”

The two companies plan to copublish a report on Triller’s data based on Apptopia’s “final analysis,” the spokesperson said, adding there was no defined timeline for when the report would be released.

Another third-party app analytics company, Sensor Tower, estimated in late July that Triller had 42.8 million lifetime installs. When asked by Business Insider for further comment regarding the difference between that estimate and what Triller had said the app’s all-time downloads were around that time, Sensor Tower said its policy was never to dispute metrics published by an app.

“Sensor Tower is in no way disputing Triller’s officially published metrics or their accuracy,” a Sensor Tower spokesperson told Business Insider. “In cases where an app publisher has released its own figures, regardless of whether they’re a partner like Triller or not, it is our policy to defer to them as the de facto source of truth from that point forward and not share any specific metrics outside our platform and subscriber base.”

Triller is continuing to position itself as a TikTok rival, and said in July it was looking to raise more money

Since October 2019, Triller has continued to share monthly active-user numbers and total downloads statistics in its press releases.

On December 19, 2019, roughly two months after the company shared its 13 million monthly active-user number, the company said it had over 26.5 million “monthly average users” and was “growing at an exponential pace with over 500% month-over-month growth.”

On September 15, 2020, the company wrote in a press release announcing that the D’Amelio family had joined Triller that it had “over 100 million monthly active users” and “over 250 million downloads.” One week later in a press release announcing a partnership with the body-grooming company Manscaped, the company said it had “more than 140 million downloads.”

The size of Triller’s user base and how fast it’s growing have been key talking points by the company’s leadership as it aims to position the app as a contender in the battle with TikTok and Instagram’s Reels for short-form-video users.

TikTok’s hopes of remaining a player in the US have improved slightly after Trump said Sept. 19 that he approved “in concept” of a proposed deal with Oracle and Walmart. A federal judge wrote in a ruling Sept. 27 that Trump’s attempts to ban TikTok “likely exceed” the legal bounds of his executive authority.

Meanwhile, Triller has been looking for further investment at a lofty valuation. Triller’s executive chairman Bobby Sarnevesht told dot.LA in July that the company was seeking to raise $250 million at a $1.25 billion valuation.

The company has previously raised funding from firms like Taiwan’s Fubon Financial Holding Co. and Indonesia’s GDP Venture, according to The Wall Street Journal. Fubon declined to comment to Business Insider on the former employees’ claims and the reported discrepancy between Apptopia’s numbers and Triller’s public ones; GDP did not respond to a request for comment.

But whether Triller can persuade TikTok’s 100 million users in the US, and its creators, to switch over to its app is yet to be seen.

An August survey of social-media creators by the influencer-marketing firm Obviously put the company at a distant third behind TikTok and Instagram’s Reels among short-form video platforms.

Are you a Triller employee with insight to share? Contact reporter Dan Whateley at dwhateley@businessinsider.com using a non-work device.