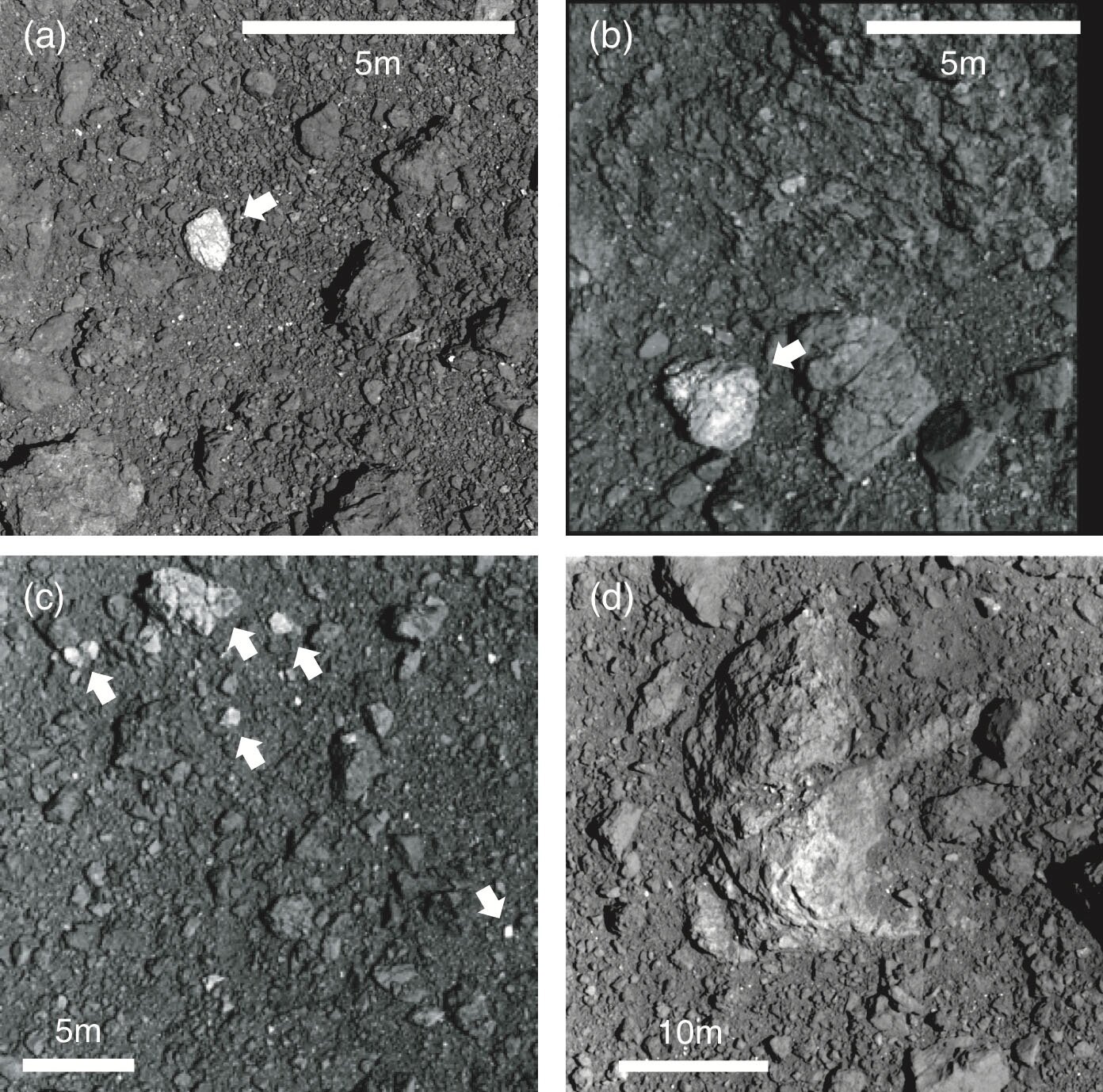 The asteroid Ryugu may look like a solid piece of rock, but it’s more accurate to liken it to an orbiting pile of rubble. Given the relative fragility of this collection of loosely bound boulders, researchers believe that Ryugu and similar asteroids probably don’t last very long due to disruptions and collisions from other asteroids. Ryugu is estimated to have adopted its current form around 10 million to 20 million years ago, which sounds like a lot compared to a human lifespan, but makes it a mere infant when compared to larger solar system bodies.

“Ryugu is too small to have survived the whole 4.6 billion years of solar system history,” said Professor Seiji Sugita from the Department of Earth and Planetary Science at the University of Tokyo. “Ryugu-sized objects would be disrupted by other asteroids within several hundred million years on average. We think Ryugu spent most of its life as part of a larger, more solid parent body. This is based on observations by Hayabusa2 which show Ryugu is very loose and porous. Such bodies are likely formed from reaccumulations of collision debris.”

As well as giving researchers data to measure Ryugu’s density, Hayabusa2 also collects information about the spectral properties of the asteroid’s surface features. For this study in particular, the team was keen to explore the subtle differences between the various kinds of boulders on or embedded in the surface. They determined there are two kinds of bright boulders on Ryugu, and the nature of these gives away how the asteroid may have formed.

“Ryugu is considered a C-type, or carbonaceous, asteroid, meaning it’s primarily composed of rock that contains a lot of carbon and water,” said postdoctoral researcher Eri Tatsumi. “As expected, most of the surface boulders are also C-type; however, there are a large number of S-type, or siliceous, rocks as well. These are silicate-rich, lack water-rich minerals and are more often found in the inner, rather than outer, solar system.”

Given the presence of S- as well as C-type rocks on Ryugu, researchers are led to believe the little rubble-pile asteroid likely formed from the collision between a small S-type asteroid and Ryugu’s larger C-type parent asteroid. If the nature of this collision had been the other way around, the ratio of C- to S-type material in Ryugu would also be reversed. Hayabusa2 is now on its return journey to Earth and is expected to deliver its cargo of samples on Dec. 6 of this year. Researchers are keen to study this material to add evidence for this hypothesis and to elucidate many other things about our little rocky neighbor.

“We used the optical navigation camera on Hayabusa2 to observe Ryugu’s surface in different wavelengths of light, and this is how we discovered the variation in rock types. Among the bright boulders, C and S types have different albedos, or reflective properties,” said Tatsumi. “But I eagerly await the analysis of the return samples, as this will confirm theories and improve the accuracy of our knowledge about Ryugu. What will be really interesting is knowing how Ryugu differs from meteorites on Earth, as this could in turn tell us something new about the history of Earth and the solar system as a whole.”

Ryugu is not the only near-Earth asteroid scientists are currently exploring with probes, though. Another international team under NASA is currently studying the asteroid Bennu with the OSIRIS-REx spacecraft in orbit around it. Tatsumi also collaborates with researchers on that project and the teams share their research findings.

“When I was a child, I felt the other planets were always out of reach. But with the power of the instruments on our spacecraft, the images are so sharp and clear it feels like you could almost touch the surface of these asteroids,” said Tatsumi. “Right now, I’m studying asteroids with giant telescopes in the Canary Islands. And one day, I hope to also explore icy comets and trans-neptunian objects such as dwarf planets. In this way, we may soon fully understand and appreciate how our solar system began.”

The study is published in Nature Astronomy.