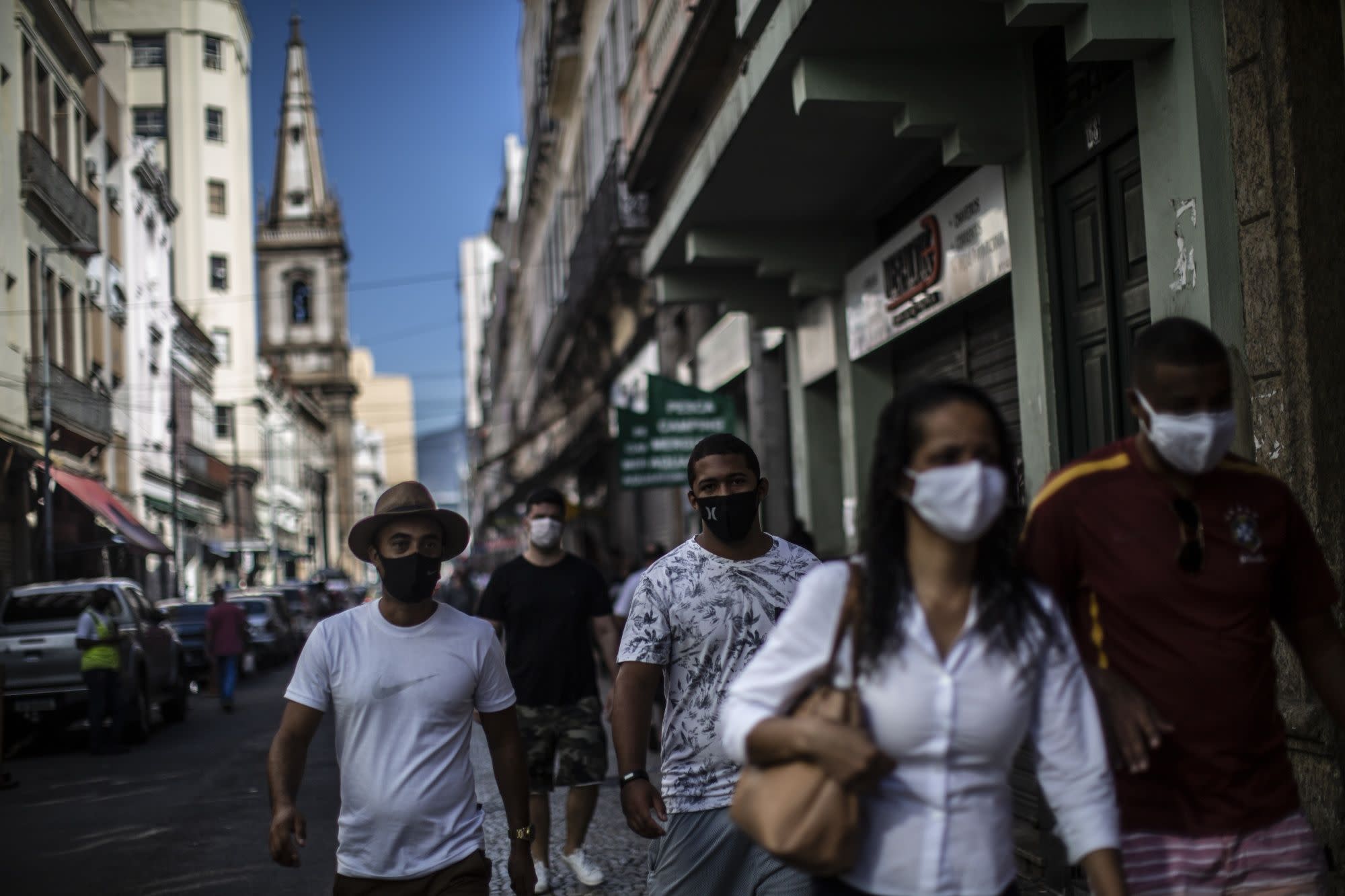 (Bloomberg) — Putting aside the selloff in stocks, emerging markets didn’t come out of last week too badly, with currencies and bonds carving out gains.

But investors have every reason to be wary.

For one thing, the jury’s still out over whether the technology-led equity declines — which saw the main emerging-market index register its worst week since April — were just a correction or the start of something more sustained. Then there’s the myriad of risks that have stalked markets for much of this year, from U.S.-China tensions and America’s looming presidential election to the inexorable spread of Covid-19 and the strain it’s putting on national budgets and growth.

Little wonder that beneath the surface there are signs of turbulence ahead. A rally for Brazil’s real and other Latin American currencies may have helped the main emerging-market index post a second successive weekly advance, but a JPMorgan Chase & Co. gauge of expected swings in emerging-market foreign exchange jumped the most in a month. A similar indicator for volatility in stocks climbed the most since June.

“It will be hard for emerging markets to sustain the rally if countries can’t deliver growth,” said Claudio Irigoyen, head of Latin American fixed-income and foreign-exchange strategy at Bank of America in New York. “The key for a correction in the coming weeks until we get closer to the U.S. elections will be the dynamics of U.S. real rates and emerging-market activity numbers.”

Which is why investors are increasingly concerned that, with central banks running out of ammunition — Malaysia and Peru will likely keep interest rates unchanged this week — and governments poised to pare back stimulus measures, signs of a recovery across the world’s developing economies remain patchy.

South Africa, whose rand is among the worst major currency performers versus the dollar this year, will this week probably report an unprecedented economic contraction in the second quarter. By contrast, data from China may say its economy is making more headway. The yuan is one of the biggest gainers of 2020.

“Fiscal deterioration as well as subdued potential growth and productivity in emerging markets remain key longer-term concerns of ours,” said Paul Greer, a money manager in London at Fidelity International, which oversees about $566 billion. “We are now anticipating a period of pre-election de-risking and hedging as we head into a highly uncertain U.S. vote on November 3rd.”

Bank Negara Malaysia meets on Thursday, with most economists surveyed by Bloomberg expecting borrowing costs to be kept on holdAnalysts predicting a pause generally place greater weight on the stabilization of inflation, while Bloomberg Economics says the central bank may cut the rate in the wake of a double-digit contraction in 2Q GDPMalaysia’s 10-year benchmark yield fell about 5 basis points last week

Peru’s central bank is expected to hold its key interest rate at 0.25% on Thursday, according to economists surveyed by Bloomberg

The nation last week recorded the highest number of coronavirus deaths per capita in the worldPolicy makers in Kazakhstan meet Tuesday, and Serbia’s gather on Thursday

China’s August trade data on Monday showed exports continuing to rebound from a year earlier. The 9.5% year-over-year above-consensus outcome and the below-consensus import number produced a $59b trade surplusThe onshore yuan last week extended its longest stretch of weekly increases in two yearsThe nation will release August CPI and PPI numbers on Wednesday. Consumer price inflation may have cooled to around 2.4% year-on-year, while factory-gate deflation probably continued to ease at a rate of about 1.9%China’s 10-year bond yields are above their July peak after rising 2 basis points last week. The nation’s high yields have helped attract the most significant bond inflows in two years in August, helping support the yuan along with the outsize trade surplusesMoney supply and loans growth numbers are due from Thursday onwards

South Africa’s economy contracted an annualized 47% in the three months through June from the previous quarter, data due on Tuesday are forecast to showThat would be the deepest quarterly decline since at least 1990, with the economy in recession even before the impact of the global pandemic“South Africa’s lockdown was one of the most draconian in the world, resulting in a huge economic cost,” Bloomberg Economics said in a report. “While the government unveiled a stimulus package to help cushion the economy, it was too little too late, weakening the recovery from a near standstill in April”Africa’s most-industrialized economy will also publish data on reserves, consumer confidence, the current-account balance, mining production and manufacturing outputDerivatives traders are the most bearish on the South African rand in emerging markets, after the Turkish lira, Colombian peso, Russian ruble and Brazilian real, according to one-month risk reversals

Argentina’s new bonds, which are yielding about 11% on the gray market, will start officially trading this week after the nation emerged from its ninth defaultBondholders will keep tabs on negotiations between Argentina and the International Monetary Fund, looking for indications about the government’s plans to revive the economy

Taiwan’s exports rose to a record in August, aided by suppliers rushing to ship as many components as possible to Huawei Technologies Co. before a U.S. ban on sales to the company comes into effect next weekAugust inflation figures are due on Tuesday, with headline CPI expected to come in at -0.4% year-on-yearThe Taiwanese dollar continued to show a pattern of intra-day appreciation followed by a late slump, while intraday swings have been greater in recent weeksThe Philippines’ July trade figures are due on ThursdayREAD: Best Days May Be Over for World-Beating Peso Bonds: SEAsia RatesMalaysia’s July industrial production due on Friday is expected to turn positive for the first time since FebruaryThe ringgit remained among the best-performing currencies in Asia last weekIndia is expected to report another double-digit contraction for its July industrial production due on FridayThe rupee was one of Asia’s best performers last week as the central bank remained less active in the foreign-exchange marketMexico will present its 2021 budget on Tuesday. Barclays analysts, led by Marco Oviedo, expect a primary deficit of 0.6% of GDPMexico’s peso advanced more than 1% last week

While Mexico is likely to report faster inflation in August on Wednesday, stoking concern about resilient pressure on prices despite weak domestic demand and economic slack, it will probably be in line with the central bank’s forecast, according to Bloomberg Economics

Investors will also watch industrial production levels for July on Friday for signs of how the pandemic is impacting manufacturing. The peso is the best-performing currency in emerging markets this quarter

July retail sales figures, expected on Thursday, will also be key in gauging the nation’s economic rebound.Lawmakers in Congress will start debating tax and administrative reforms