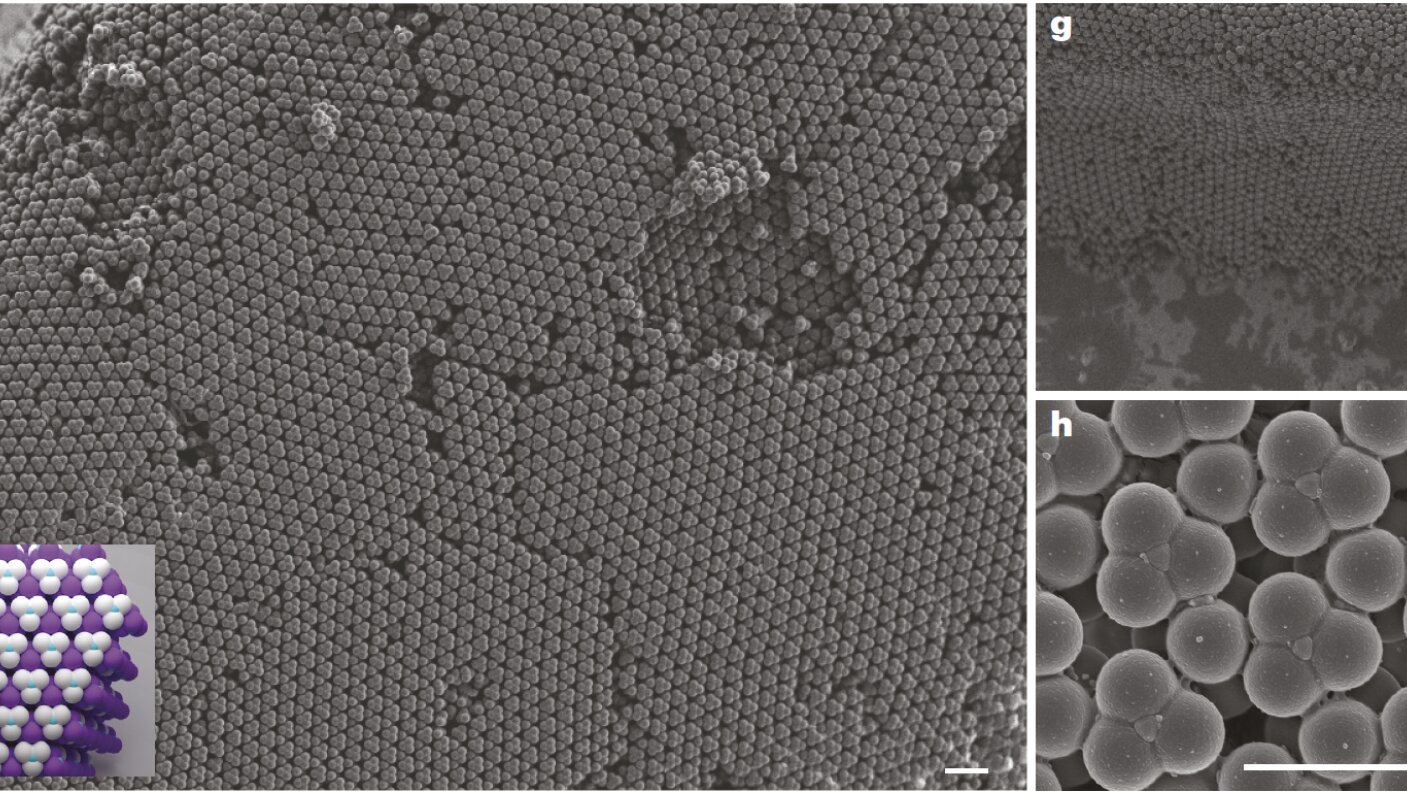 The colloidal diamond has been a dream of researchers since the 1990s. These structures—stable, self-assembled formations of miniscule materials—have the potential to make light waves as useful as electrons in computing, and hold promise for a host of other applications. But while the idea of colloidal diamonds was developed decades ago, no one was able to reliably produce the structures. Until now.

Researchers led by David Pine, professor of chemical and biomolecular engineering at the NYU Tandon School of Engineering and professor of physics at NYU, have devised a new process for the reliable self-assembly of colloids in a diamond formation that could lead to cheap, scalable fabrication of such structures. The discovery, detailed in “Colloidal Diamond,” appearing in the September 24 issue of Nature, could open the door to highly efficient optical circuits leading to advances in optical computers and lasers, light filters that are more reliable and cheaper to produce than ever before, and much more.

Pine and his colleagues, including lead author Mingxin He, a postdoctoral researcher in the Department of Physics at NYU, and corresponding author Stefano Sacanna, associate professor of chemistry at NYU, have been studying colloids and the possible ways they can be structured for decades. These materials, made up of spheres hundreds of times smaller than the diameter of a human hair, can be arranged in different crystalline shapes depending on how the spheres are linked to one another. Each colloid attaches to another using strands of DNA glued to surfaces of the colloids that function as a kind of molecular Velcro. When colloids collide with each other in a liquid bath, the DNA snags and the colloids are linked. Depending on where the DNA is attached to the colloid, they can spontaneously create complex structures.

This process has been used to create strings of colloids and even colloids in a cubic formation. But these structures did not produce the Holy Grail of photonics—a band gap for visible light. Much as a semiconductor filters out electrons in a circuit, a band gap filters out certain wavelengths of light. Filtering light in this way can be reliably achieved by colloids if they are arranged in a diamond formation, a process deemed too difficult and expensive to perform at commercial scale.

“There’s been a great desire among engineers to make a diamond structure,” said Pine. “Most researchers had given up on it, to tell you the truth—we may be the only group in the world who is still working on this. So I think the publication of the paper will come as something of a surprise to the community.”

The investigators, including Etienne Ducrot, a former postdoc at NYU Tandon, now at the Centre de Recherche Paul Pascal – CNRS, Pessac, France; and Gi-Ra Yi of Sungkyunkwan University, Suwon, South Korea, discovered that they could use a steric interlock mechanism that would spontaneously produce the necessary staggered bonds to make this structure possible. When these pyramidal colloids approached each other, they linked in the necessary orientation to generate a diamond formation. Rather than going through the painstaking and expensive process of building these structures through the use of nanomachines, this mechanism allows the colloids to structure themselves without the need for outside interference. Furthermore, the diamond structures are stable, even when the liquid they form in is removed.

The discovery was made because He, a graduate student at NYU Tandon at the time, noticed an unusual feature of the colloids he was synthesizing in a pyramidal formation. He and his colleagues drew out all of the ways these structures could be linked. When they happened upon a particular interlinked structure, they realized they had hit upon the proper method. “After creating all these models, we saw immediately that we had created diamonds,” said He.

He explained that potential future advances include applications for high-efficiency lasers with reduced weight and energy demands for precision sensors and directed energy systems; and precise control of light for 3-D integrated photonic circuits or optical signature management.

“I am thrilled with this result because it wonderfully illustrates a central goal of ARO’s Materials Design Program—to support high-risk, high-reward research that unlocks bottom-up routes to creating extraordinary materials that were previously impossible to make.”

The team, which also includes John Gales, a graduate student in physics at NYU, and Zhe Gong, a postdoc at the University of Pennsylvania, formerly a graduate student in chemistry at NYU, are now focused on seeing how these colloidal diamonds can be used in a practical setting. They are already creating materials using their new structures that can filter out optical wavelengths in order to prove their usefulness in future technologies.