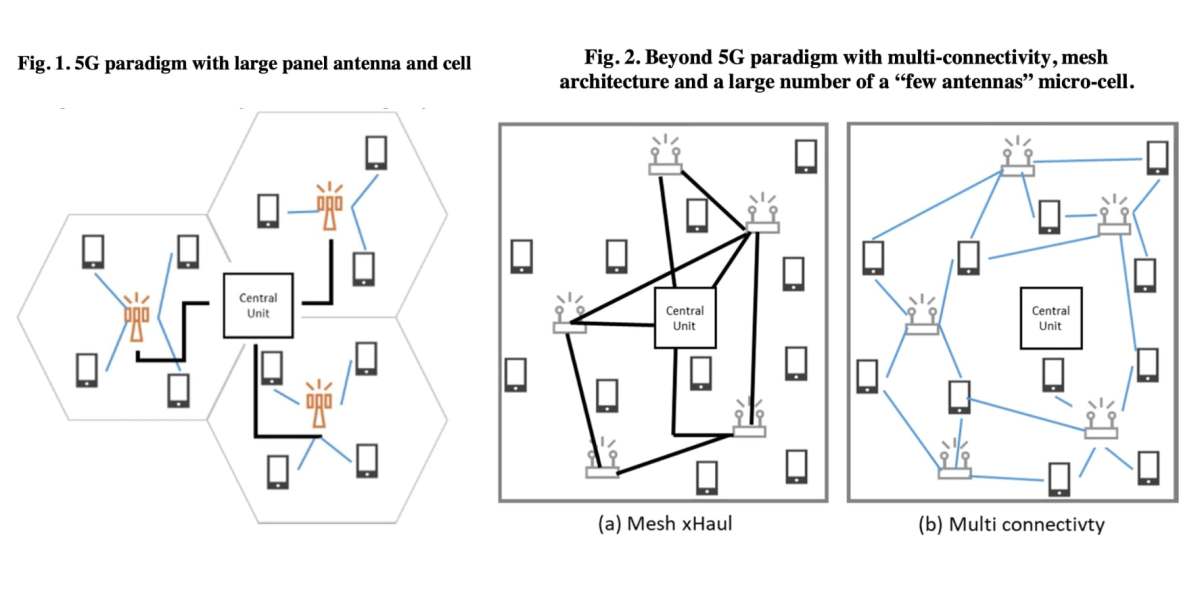 Though the earliest 5G devices aren’t yet two years old, researchers started laying the groundwork for the next generation of cellular technology — 6G — well before 5G networks launched across the world. Nothing’s set in stone, but a team at telecom company Radiall is advocating a radical shift in the very concept of “cellular” infrastructure, using many small, inexpensive antennas as an alternative to the large antennas 5G and older systems rely upon.

Historically, cellular or cell phones have relied on a dual hub and spoke system to connect devices to a network: The first hub is a central unit connected with fiber cables to multiple base station radio spokes, turning the base stations into secondary wireless hubs connected to multiple spoke devices (such as phones). Each base station’s geographic coverage area is a “cell,” and neither base stations nor devices communicate with base stations or cells outside of that area — a phone switches from cell to cell as it moves in the user’s pocket, hands, or car from place to place.

Radiall isn’t the first to suggest that 6G might shift to a mesh-like infrastructure, but the company provides a clear sense of how the evolution might happen. A central hub would still connect to base station radios, but the base stations would also be connected to one another — potentially using millimeter wave connections rather than fiber. Instead of relying on a single base station for data, devices such as phones could connect to two or more base stations at once, a multi-connectivity system that would create “micro-cells.” Picture all of the home and business Wi-Fi routers in a neighborhood collectively offering wireless data connections to whatever devices are nearby, and you get the basic idea.

There are multiple potential advantages to the micro-cell system, but Radiall sees two as particularly compelling: lower costs and greater power efficiency. As contrasted with the massive MIMO antenna arrays that are currently being used to enable 5G connectivity, which are “particularly power-intensive” and expensive due to their placement of many antennas in a single huge tower that needs to broadcast at great distances, the micro-cell system would use multiple small distributed antennas to virtually create the coverage of a large one. Over time, the result would be a “cell-free” network where devices benefit from whatever base stations happen to be in range, rather than requiring proximity to a cellular tower.

Whether what emerges is micro-cell or cell-free, the 6G system will need to deal with an almost unfathomable quantity of data — human brain caliber AI, holograms, digital twins, and other applications will require an order of magnitude more bandwidth than what 5G is just beginning to offer, and faster, across a much larger number of network-connected devices. Carriers could choose to use a combination of large and micro cells, but Radiall believes the use of many cells will be a “data capacity booster” when it’s most needed.

From a component standpoint, Radiall says that moving to the micro-cell system would enable cellular networks to use commonly available “building blocks,” including the same small and affordable transmit/receive modules already used in smartphones. But the network would also need an aggregation connector to link and coordinate network activities that will be increasingly distributed across points; whether that link will be partially wireless or fully wired remains to be seen. Like others in the 6G research space, Radiall expects that terahertz radio spectrum will play a role in the next standard, as 5G networks continue to broaden the use of millimeter waves, paving the way for some form of millimeter wave or near-terahertz spectrum to connect base stations to one another.

The underlying research paper, “Aggregated Massive Modular Paradigm: A 6G Telecom Infrastructure Vision,” was developed by a French team at the Radiall CEA-Leti 5G & Beyond Common Lab, and is expected to appear in a future IEEE publication. Rather than treating their work as conclusive, the team describes it as a “vision” for 6G and is inviting open discussion of the concepts.