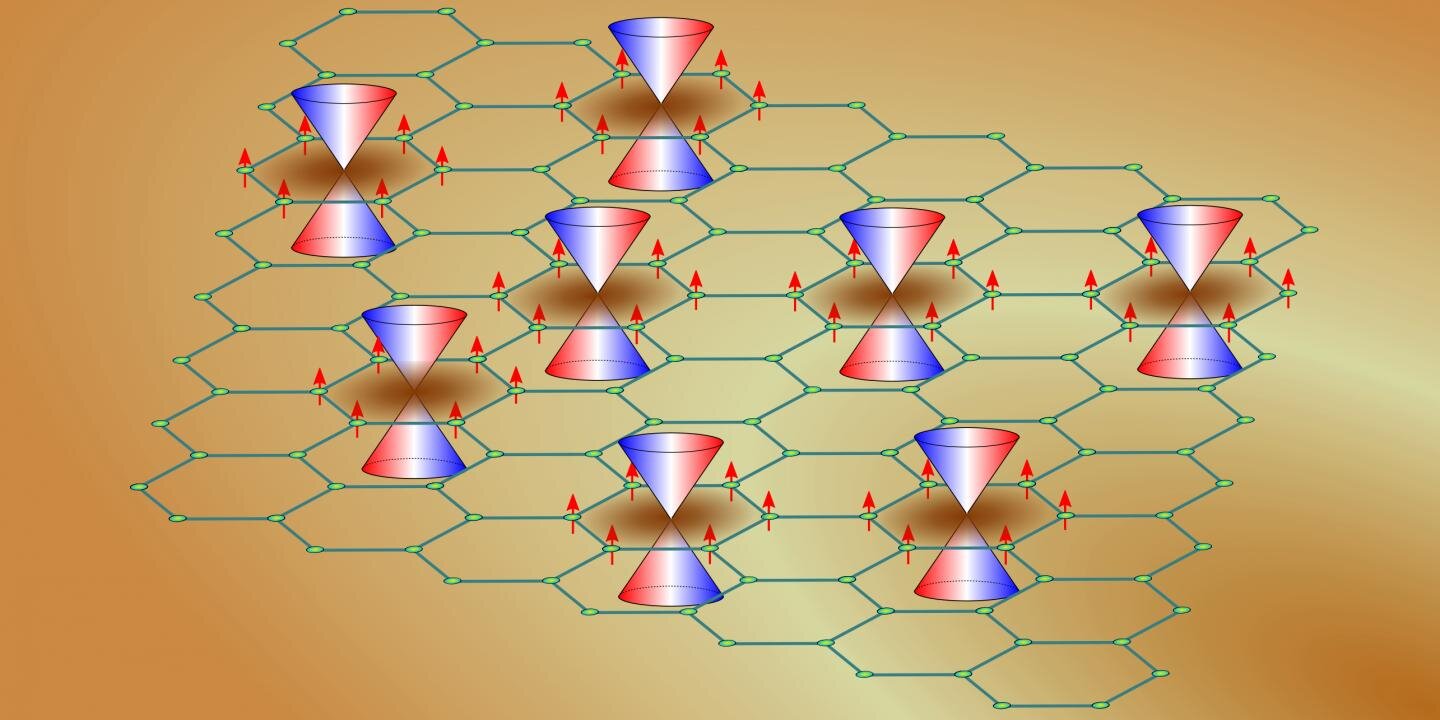 The search is on to discover new states of matter, and possibly new ways of encoding, manipulating, and transporting information. One goal is to harness materials’ quantum properties for communications that go beyond what’s possible with conventional electronics. Topological insulators—materials that act mostly as insulators but carry electric current across their surface—provide some tantalizing possibilities.

“Exploring the complexity of topological materials—along with other intriguing emergent phenomena such as magnetism and superconductivity—is one of the most exciting and challenging areas of focus for the materials science community at the U.S. Department of Energy’s Brookhaven National Laboratory,” said Peter Johnson, a senior physicist in the Condensed Matter Physics & Materials Science Division at Brookhaven. “We’re trying to understand these topological insulators because they have lots of potential applications, particularly in quantum information science, an important new area for the division.”

For example, materials with this split insulator/conductor personality exhibit a separation in the energy signatures of their surface electrons with opposite “spin.” This quantum property could potentially be harnessed in “spintronic” devices for encoding and transporting information. Going one step further, coupling these electrons with magnetism can lead to novel and exciting phenomena.

“When you have magnetism near the surface you can have these other exotic states of matter that arise from the coupling of the topological insulator with the magnetism,” said Dan Nevola, a postdoctoral fellow working with Johnson. “If we can find topological insulators with their own intrinsic magnetism, we should be able to efficiently transport electrons of a particular spin in a particular direction.”

In a new study just published and highlighted as an Editor’s Suggestion in Physical Review Letters, Nevola, Johnson, and their coauthors describe the quirky behavior of one such magnetic topological insulator. The paper includes experimental evidence that intrinsic magnetism in the bulk of manganese bismuth telluride (MnBi2Te4) also extends to the electrons on its electrically conductive surface. Previous studies had been inconclusive as to whether or not the surface magnetism existed.

But when the physicists measured the surface electrons’ sensitivity to magnetism, only one of two observed electronic states behaved as expected. Another surface state, which was expected to have a larger response, acted as if the magnetism wasn’t there.

“Is the magnetism different at the surface? Or is there something exotic that we just don’t understand?” Nevola said.

Johnson leans toward the exotic physics explanation: “Dan did this very careful experiment, which enabled him to look at the activity in the surface region and identify two different electronic states on that surface, one that might exist on any metallic surface and one that reflected the topological properties of the material,” he said. “The former was sensitive to the magnetism, which proves that the magnetism does indeed exist in the surface. However, the other one that we expected to be more sensitive had no sensitivity at all. So, there must be some exotic physics going on!”

The scientists studied the material using various types of photoemission spectroscopy, where light from an ultraviolet laser pulse knocks electrons loose from the surface of the material and into a detector for measurement.

The map of the energy levels of the excited electrons shows two distinct surface bands that each display separate branches, electrons in each branch having opposite spin. Both bands, each representing one of the two electronic states, were expected to respond to the presence of magnetism.

To test whether these surface electrons were indeed sensitive to magnetism, the scientists cooled the sample to 25 Kelvin, allowing its intrinsic magnetism to emerge. However only in the non-topological electronic state did they observe a “gap” opening up in the anticipated part of the spectrum.

“Within such gaps, electrons are prohibited from existing, and thus their disappearance from that part of the spectrum represents the signature of the gap,” Nevola said.

The observation of a gap appearing in the regular surface state was definitive evidence of magnetic sensitivity—and evidence that the magnetism intrinsic in the bulk of this particular material extends to its surface electrons.

However, the “topological” electronic state the scientists studied showed no such sensitivity to magnetism—no gap.

“That throws in a bit of a question mark,” Johnson said.

“These are properties we’d like to be able to understand and engineer, much like we engineer the properties of semiconductors for a variety of technologies,” Johnson continued.

In spintronics, for example, the idea is to use different spin states to encode information in the way positive and negative electric charges are presently used in semiconductor devices to encode the “bits”—1s and 0s—of computer code. But spin-coded quantum bits, or qubits, have many more possible states—not just two. This will greatly expand on the potential to encode information in new and powerful ways.

“Everything about magnetic topological insulators looks like they’re right for this kind of technological application, but this particular material doesn’t quite obey the rules,” Johnson said.

So now, as the team continues their search for new states of matter and further insights into the quantum world, there’s a new urgency to explain this particular material’s quirky quantum behavior.

Getting a look under the hood of topological insulators