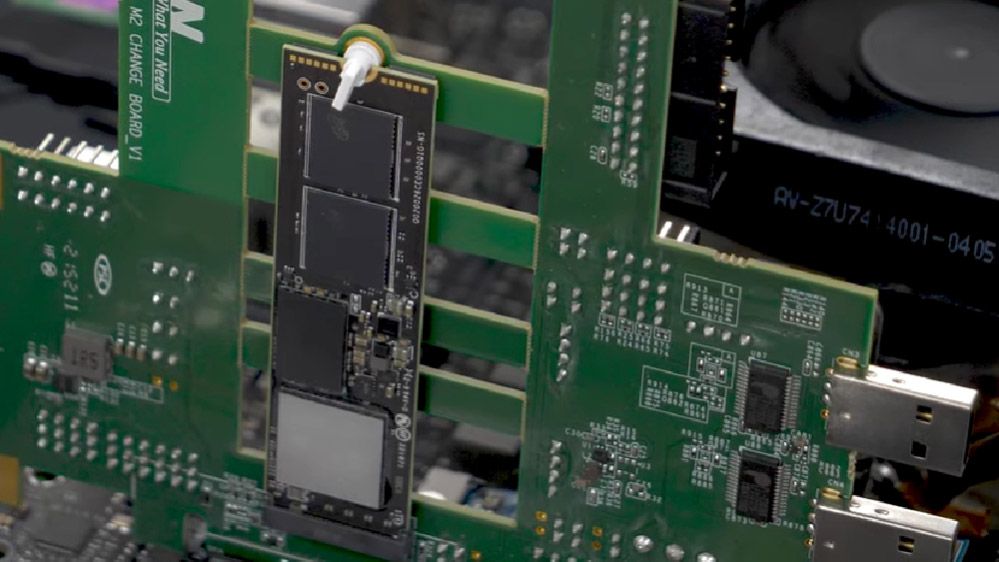 As the launch of next generation platforms with PCIe 5.0 SSD support draws closer, Phison has showcased a PCIe 5.0 SSD in action. As expected, it’s fast. The engineering sample drive is based on Phison’s new PS5026-E26 controller. The drive obliterates the sequential performance of PCIe 4.0 drives, with read and write speeds of 12,457MB/s and 10,047MB/s respectively.

Phison used CrystalDiskMark to benchmark the drive. While the sequential performance is what draws the headlines, its 4K performance is also excellent and will surely only get better. E26 drives are still months away from release, meaning there’s a lot of scope for firmware tweaks and improvements.

An interesting thing to note is that some manufacturers may choose to adopt a new M.2 form factor. Whereas 2280 drives are by far the most common form factor used in consumer drives (22mm wide and 80mm long), the Phison E26 drive is 3mm wider, making it a 2580 drive. Though the M.2 connector itself is the same, the extra PCB width may break compatibility with older motherboards or laptops. We’ll have to wait and see if the consumer market adopts this newer form factor or not.

Raw sequential speeds of 10GB/s or more might not make a huge amount of difference in the real world right now, but that may change. It won’t be long before we start seeing games take advantage of Microsoft’s DirectStorage API (opens in new tab), where faster sequential transfers of data to a GPU should be advantageous. Nvidia’s RTX IO (opens in new tab) and AMD’s SmartAccess Storage (opens in new tab) both support DirectStorage. We can expect to see these technologies in action as the launch of PCIe 5.0 SSDs and next generation GPUs draws closer.

PCIe 5.0 drives are expected to make their debut alongside AMD’s Zen 4 CPUs and accompanying X670 motherboards. Phison Micron and AMD are collaborating (opens in new tab) with each other to make sure that the entire platform is ready from day one. Intel’s next gen desktop platform is also expected to offer PCIe 5.0 M.2 support.