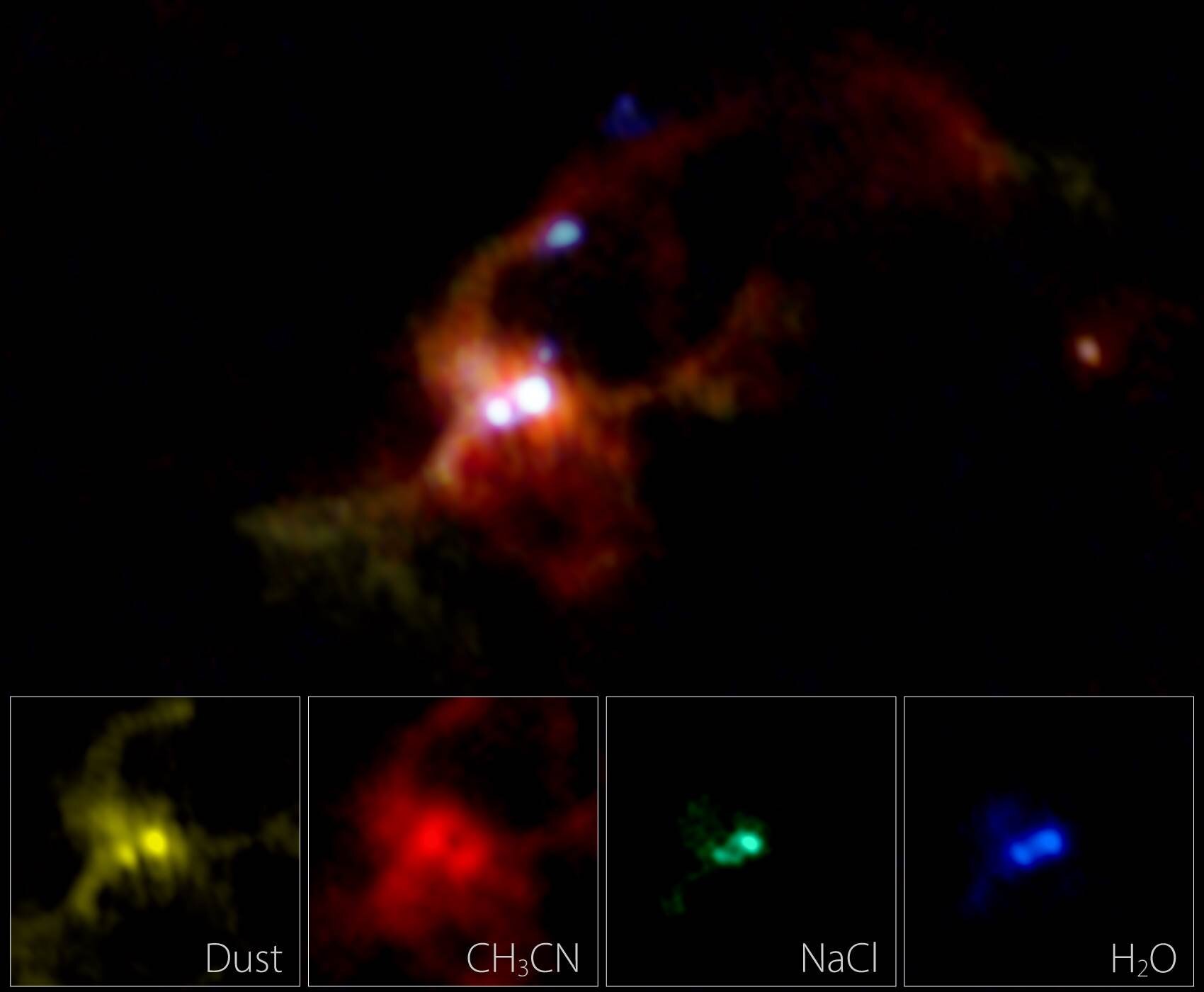 Using the Atacama Large Millimeter/submillimeter Array (ALMA), astronomers spotted a pair of massive baby stars growing in salty cosmic soup. Each star is shrouded by a gaseous disk which includes molecules of sodium chloride, commonly known as table salt, and heated water vapor. Analyzing the radio emissions from the salt and water, the team found that the disks are counter rotating. This is the second detection of salt around massive young stars, promising that salt is an excellent marker to explore the immediate surroundings of giant baby stars.

There are stars of many different masses in the universe. Smaller ones only have one-tenth the mass of the sun, while larger ones have 10 times or more mass than the sun. Regardless of the mass, all stars are formed in cosmic clouds of gas and dust. Astronomers have eagerly studied the origins of stars, however, the process of massive star formation is still veiled. This is because the formation sites of massive stars are located farther from the Earth, and massive baby stars are surrounded by massive clouds with complicated structures. These two facts prevent astronomers from obtaining clear views of massive young stars and their formation sites.

A team of astronomers led by Kei Tanaka at the National Astronomical Observatory of Japan utilized ALMA’s power to investigate the environment where massive stars are forming. They observed the massive young binary IRAS 16547-4247. The team detected radio emissions from a wide variety of molecules. Particularly, sodium chloride (NaCl) and hot water (H2O) are found to be associated in the immediate vicinity of each star, i.e., the circumstellar disk. On the other hand, other molecules such as methyl cyanide (CH3CN), which has commonly been observed in previous studies of massive young stars, were detected further out, but do not trace structures in the vicinity of stars well.

“Sodium chloride is familiar to us as table salt, but it is not a common molecule in the universe,” says Tanaka. “This was only the second detection of sodium chloride around massive young stars. The first example was around Orion KL Source I, but that is such a peculiar source that we were not sure whether salt is suitable to see gas disks around massive stars. Our results confirmed that salt is actually a good marker. Since baby stars gain mass through disks, it is important to study the motion and characteristics of disks to understand how the baby stars grow.”

Further investigation of the disks shows an interesting hint to the origin of the pair. “We found a tentative sign that the disks are rotating in opposite directions,” explains Yichen Zhang, a researcher at RIKEN. If the stars are born as twins in a large common gaseous disk, then naturally the disks rotate in the same direction. “The counter-rotation of the disks may indicate that these two stars are not actual twins, but a pair of strangers which were formed in separated clouds and paired up later.” Massive stars almost always have some companions, and thus it is pivotal to investigate the origin of massive binary systems. The team expects that further observation and analysis will provide more dependable information on the secrets of their birth.

The presence of heated water vapor and sodium chloride, which were released by the destruction of dust particles, suggests the hot and dynamic nature of disks around massive baby stars. Interestingly, investigations of meteorites indicate that the proto-solar system disk also experienced high temperatures in which dust particles were evaporated. Astronomers will be able to trace these molecules released from dust particles well by using the next-generation Very Large Array, currently under planning. The team anticipates that they can even obtain clues to understand the origin of our solar system through studying hot disks with sodium chloride and hot water vapor.

The baby stars IRAS 16547-4247 are located 9500 light-years away in the constellation Scorpius. The total mass of the stars is estimated to be 25 times the mass of the sun, surrounded by a gigantic cloud with the mass of 10,000 suns.