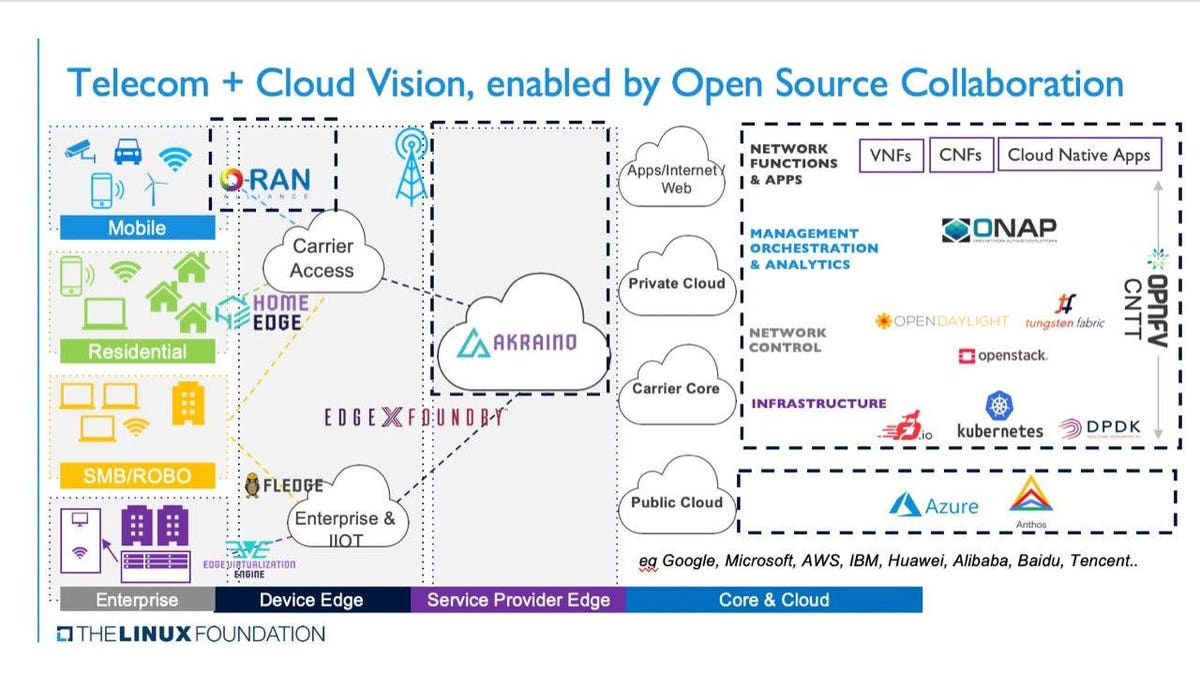 Last week, I virtually attended ONES 2020, the Linux Foundation’s Open Networking and Edge Summit. I was impressed with the diversity of content at ONES this year, and appreciated the added emphasis on edge (which was the impetus for adding the “E” to the conference name—if you’ve never heard of the event, it’s because it was previously called ONS). Today I would like to highlight what I consider the most compelling announcements and takeaways from the jam-packed 3-day event.

The major public cloud providers have been chasing the telco space in a big way as of late. Amazon Web Services (AWS) has led in many ways, offering service providers platforms such as Wavelength to supercharge 5G deployments with edge computing infrastructure. The Microsoft Azure team is snapping up companies to shore up its capabilities as well. For more information on Microsoft’s strategy, see my recent article on the topic here.

That said, I believe Google Cloud Platform (GCP) closed the gap at ONES with its announcement that it was joining the Linux Foundation. In joining at a Platinum level, GCP committed to open source networking in a big way. I believe that GCP will make an immediate impact on projects, including ONAP (Open Network Automation Platform)—a project making significant strides in developing a unified framework to orchestrate physical and virtual network functions. I believe that GCP’s commitment is a result of Kevin Shatzkamer’s decision to join GCP as its Digital Transformation Officer for Telecom. I spent time with Mr. Shatzkamer when he led telco for Dell Technologies. He is a pragmatic, capable leader who understands the power of open source, as evidenced by his LinkedIn blog in early July.

Three sessions, in particular, stood out for me at ONES 2020.

On the opening day of the conference, I enjoyed a session titled the “Good, Bad and Ugly of Open Source and Telco,” which featured panelists from Red Hat, Charter and AT&T. I appreciated the reference to the famous Clint Eastwood spaghetti western! One of the first questions focused on distro and whether its better to rely on companies like Red Hat or lean into the Linux Foundation working groups. I tend to agree with the panelist who opined that it should be a healthy balance. I believe this balance encourages collaboration, innovation, fast time to market and support.

On the second day, I was most impressed by the 5G network slicing session held by Alla Goldner from Amdocs. Network slicing can create new monetization opportunities for operators and deliver a better subscriber experience by fine-tuning latency and throughput based on a given application’s requirements. Open source stands to accelerate efforts by having more hands on deck. Additionally, it stands to disrupt capital and operational expenses through initiatives such as Open RAN (though I believe the jury is still out Open RAN’s long term impact—see my recent article on that topic here).

On the third day, I thought that Arpit Joshipura, who leads networking, edge, and IoT for the Linux Foundation, did a fantastic job closing the conference, speaking to its three strategic priorities over the next three years:

By all measures, Mr. Joshipura and his team have cast a wide net for open source. It will be interesting to see how Linux Foundation networking and edge projects address the strategic priorities leading up to 2023 and beyond.

ONES 2020 may be over, but all of the conference content is available for on-demand viewing here. I’ll wrap up by saying that I am a big proponent of open source in networking. I hosted a panel at last year’s ONS event, and I appreciated the chance to demonstrate my passion for it again at the networking and edge board “mingle” session I facilitated at this year’s event. The Linux Foundation’s blueprinting and ecosystem development is helping the industry tackle important challenges in edge, automation, IoT and Open RAN, while helping to harmonize standards for widespread adoption. My biggest takeaway from the event comes from a recent Linux Foundation research project that found open source has already delivered nearly $8B in value in the last six years. That is an impressive number, and one that points to the power and opportunity of open source!

Disclosure: My firm, Moor Insights & Strategy, like all research and analyst firms, provides or has provided research, analysis, advising, and/or consulting to many high-tech companies in the industry, including Amazon Web Services, AT&T, Dell Technologies, Google, Microsoft, and Red Hat, cited or related to this article. I do not hold any equity positions with any companies cited in this column.