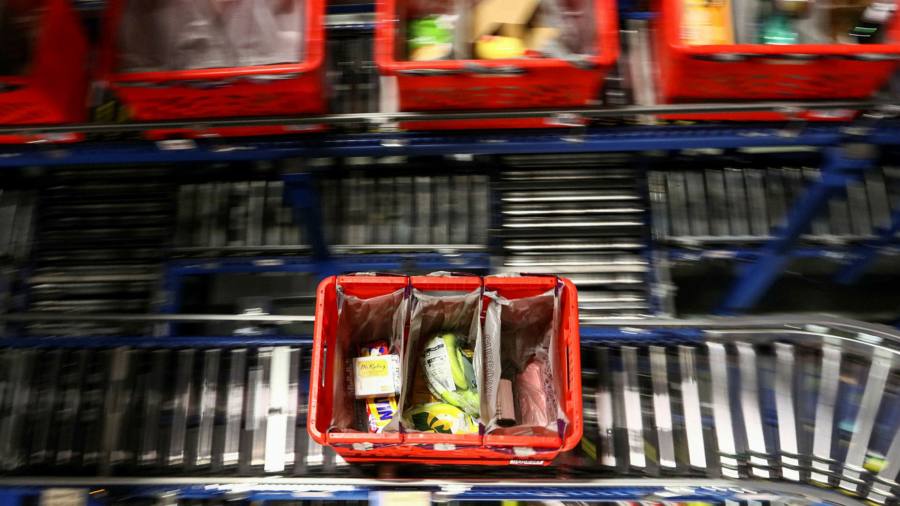 Ocado’s strategy of selling its grocery ecommerce knowhow worldwide is under threat after a Norwegian rival has claimed the company has copied its technology and infringed its patents.

AutoStore, a developer of warehouse automation systems, on Thursday filed legal claims in the UK and US courts alleging that the Ocado Smart Platform (OSP) infringed several AutoStore patents.

OSP is the integrated hardware and software system that Ocado is busy marketing to food retailers around the world, and its prospects underpin the company’s £20bn market value.

Ocado shares were down 5 per cent in early afternoon trading. The claim does not stipulate an amount for damages.

AutoStore said the design of the robots that pick grocery orders from within a “hive” warehouse, along with the lifting mechanism and the in-wheel motors, are covered by patents granted to it in 2019 and 2020.

Its claims name both Ocado Solutions and Ocado Retail, the group’s grocery ecommerce joint venture with Marks and Spencer. It is also pursuing Thapsus, the Northumberland-based manufacturer of the robots, and the Printed Motor Works, which makes the motors.

In addition to the court actions seeking damages and a ban on the manufacture and use of the technology in the UK, it has asked the US International Trade Commission to issue an order preventing the importation of such hardware into the US, where Ocado will soon start fitting out the first of 20 automated warehouses for supermarket chain Kroger.

Ocado has been a customer of AutoStore since 2012, but relations have become more difficult in recent years. A court in Norway found in 2017 that AutoStore was entitled to ownership of its patents covering the robots’ central cavity technology.

“Our ownership of the technology at the heart of Ocado’s warehousing system is clear,” said Karl Johan Lier, AutoStore’s chief executive officer. “We will not tolerate Ocado’s continued infringement of our intellectual property rights in its effort to boost its growth and attempt to transform itself into a global technology company.”

In a brief statement, Ocado said it had not received any papers in relation to the claims and that it was “not aware of any infringement of any valid AutoStore rights”.

It added that it was “investigating whether AutoStore has, or intends to infringe” its own patents, suggesting that a counterclaim is possible. “We will always vigorously protect our intellectual property,” it said.

A person briefed on the court action said the granting of patents and Ocado’s agreement with Kroger, signed in 2018, had triggered the complaint.

The Kroger arrangement is on a much larger scale than any of the company’s previous technology partnerships. It envisages the construction of about 20 automated warehouses that would use the hive system and the disputed robotic technology.

Ocado has signed similar technology partnerships with Coles in Australia, Aeon in Japan, Monoprix in France and Sobeys in Canada. Two warehouses using the hive system, in Paris and in Ontario, are already operational.