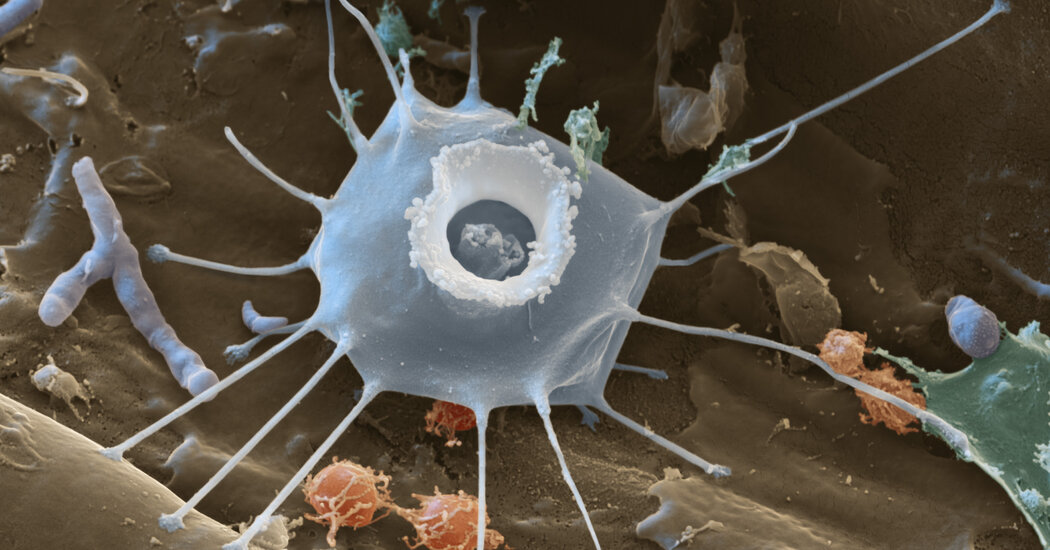 On the dinner plate that is planet Earth, there exists a veritable buffet of viruses — an amount of biomass that is the equivalent of about 25 billion human beings.

So perhaps it’s a bit baffling that scientists have yet to pinpoint a species that deliberately eats viruses for energy.

But mounting evidence suggests that at least one group of organisms might nosh on nutrient-rich viruses: protists, microscopic and often single-celled organisms that scientists have struggled to place on the tree of life. Like viruses, protists seethe in seawater by the billions and trillions — and some might slurp up marine viruses, according to a study published Thursday in the journal Frontiers in Microbiology.

If the findings pan out, they could help flip a centuries-old dogma on its head: Rather than acting only as disease-causing agents of chaos and snuffing out life, viruses might in some cases play a role in fueling and sustaining it.

The new study alone can’t nail the consumptive connection between protists and viruses, said Rika Anderson, a microbial ecologist at Carleton College in Minnesota who was not involved in the study. But protists have been found in a mind-boggling array of habitats, from the rotting stumps of trees to animal guts, and may have evolved at least as many strategies to keep themselves fed.

“They are kind of eating everything,” Dr. Anderson said. “I wouldn’t be surprised if viruses were being consumed.”

A team led by Ramunas Stepanauskas, a microbial ecologist at the Bigelow Laboratory for Ocean Sciences in Maine, started the project more than a decade ago. They initially intended to study the prey preferences of marine protists, many of which chow down on bacteria.

“The current dogma is that protists eat other single cells,” Dr. Stepanauskas said.

The researchers collected seawater samples from the Gulf of Maine and the Mediterranean Sea and picked out nearly 1,700 individual protists. They then split the cells open, one at a time, and analyzed their contents. Any genetic material that differed from a protist’s, the team reasoned, was probably the signature of something the microbes had eaten.

But after repetitive rounds of analysis, the researchers were surprised and disappointed to find that there wasn’t a whole lot of bacterial material to be found. Instead there were viruses of all shapes and sizes, sometimes gunking up cells by the dozens. Protists from two groups, choanozoa and picozoa, were never found without viral genes in their cellular cargo.

It was a bizarre discovery, said Julia Brown, a microbiologist at Bigelow Laboratory and the study’s first author. But as far back as the 1990s, researchers had posited that some protist species might be capable of co-opting viruses for food.

In some early experiments, scientists slurried the two types of microbes together in the lab to see if the protists would consume and digest the viruses, Dr. Brown said. But despite encouraging results, this line of inquiry has been paid relatively little attention in the years since. “It just sort of fell off the map,” she said.

Dr. Brown said genetic experiments that examine one cell at a time could help bolster the case for viral consumption, because they could show what protists have eaten under natural conditions — almost like examining the stomach contents of a predatory wild animal. “We get to catch them in the act of whatever they’re doing,” she said. Technologies precise enough to accomplish this have come into use only in recent years.

“This is a particularly nice technical feat that they pulled off,” said Rosie Alegado, a microbial oceanographer at the University of Hawaii at Manoa who was not involved in the study.

Still, finding viral genetic material in or around a cell doesn’t guarantee that a virus was once lunch. For example, some of the viruses might have infected the protists or simply become stuck to the surfaces of the cells.

But Dr. Brown and Dr. Stepanauskas said that some types of viruses were found only in certain groups of protists, hinting that the interactions weren’t just happenstance. And many of the viruses identified are thought to be capable of infecting only bacteria, not protists.

Another possibility is that the viruses had infected bacteria that were then gobbled up by protists, creating a sort of microbial turducken. But viral and bacterial genetic material didn’t always track together, Dr. Brown said, hinting that some protists might have skipped the middleman and gone straight for the viral vittles.

Henry N. Williams, a microbial ecologist at Florida A&M University who wasn’t involved in the study, pointed out that some protists might ingest viruses incidentally. (Even humans unknowingly swallow gobs of viruses every day.) “The protists may be in a highly grazing mode much of the time,” he said. Anything in a protist’s path within a certain size range could be downed like so much debris, with little nutritional consequence.

And if viruses do appear on the protist menu, it remains unclear whether they’re a main course or a paltry side dish. Some protists could occasionally snack on viruses as part of a diverse diet, while others feast on them exclusively. Dr. Stepanauskas said that because of their extremely petite size, picozoa — which are less than three micrometers across, or about one-thirtieth the width of a human hair — might eat only viruses. “They may not even be able to consume larger particles,” he said.

Curtis Suttle, a microbial ecologist who led several early studies on protists that might eat viruses, said his team’s unpublished experiments suggested that certain choanozoa could be die-hard virovores, too.

So while viruses might get a bad rap, Dr. Suttle said, “they’re fantastic nutritional sources.”