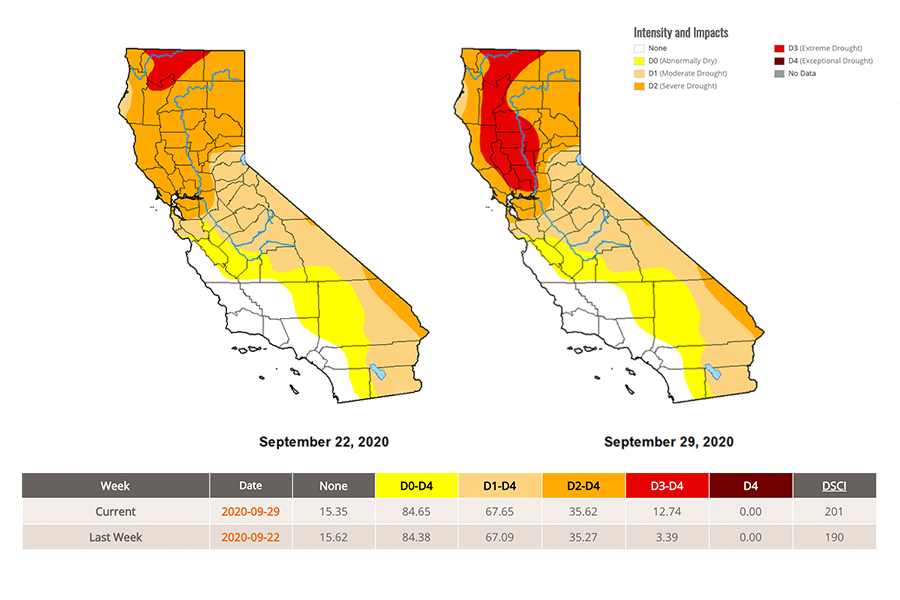 The Sept. 22 map had 3% of the state in extreme drought while the Sept. 29 map released Thursday shows 13%.

In the Bay Area, the map reveals that drought conditions range from moderate to severe.

The Drought Monitor, a mechanism to measure drought that’s mainly used in agriculture, is a joint effort of the National Oceanic and Atmospheric Administration, the U.S. Department of Agriculture and the National Drought Mitigation Center at the University of Nebraska-Lincoln. A map is released each week with drought conditions across the country, indexing everything from groundwater storage to river levels. The factors California state water managers watch most closely are precipitation totals and reservoir and snowpack levels.

The presence of drought on the map is no surprise — especially in Northern California. While Southern California saw above-average rainfall in many locations, the north, which is typically responsible for about 80% of the state’s water supply, was abnormally dry.

The Russian River watershed saw the third-driest year on record, while San Diego was soaked in one of its wettest Aprils, according to a report from the California Department of Water Resources.

This translated into below-average precipitation for the state over the past water year, running Oct. 1, 2019-Sept. 30, 2020.

The snow pack was 50% of average on April 1, making it the 10th-smallest snowpack in California since 1950, DWR said in a statement.

The state’s reservoirs received about one-third of the total water runoff from snow melt and rain that filled them in the same time period a year ago.

Despite the dry year, DWR spokesperson Chris Orrock said the state is far from declaring a statewide drought emergency, and last winter’s dry conditions are tempered by the plentiful reservoir storage from a wet 2019 when precipitation was 131% of average.

When Gov. Jerry Brown declared a drought emergency in January 2014, the state had seen dry conditions in the two years prior. Brown introduced mandatory water-use restrictions in April 2015.

“We had a dry year, but one dry year doesn’t make a drought. In California we always have some local drought conditions,” Orrock said. “There’s no definitive answer to when a drought starts, it’s based on so many factors.”