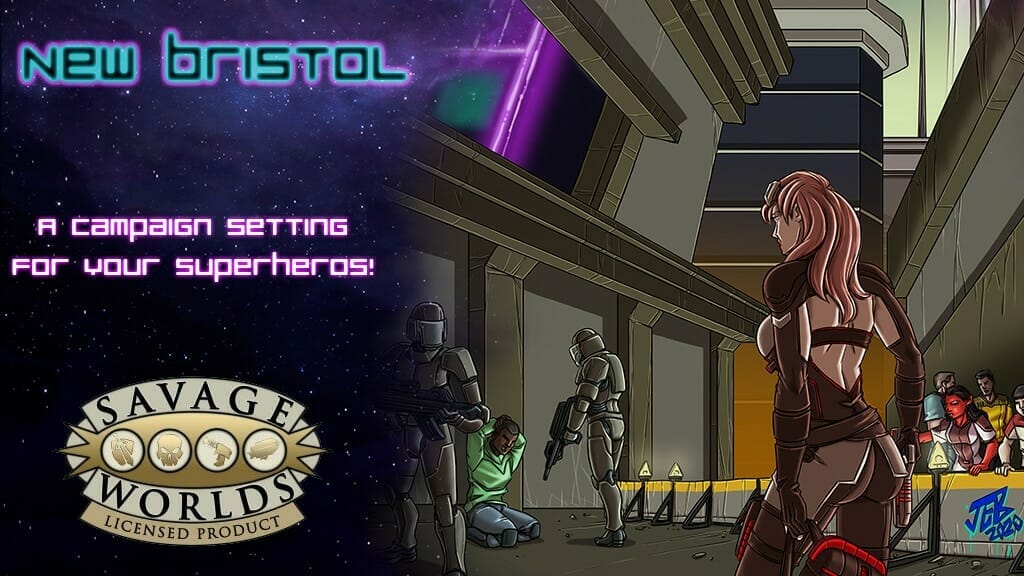 Game designer Andrew J Lucas has a unique superhero RPG setting called New Bristol up on Kickstarter. Never heard of it? That’ll because it was ripped from time, space and memory.

After a titanic battle between good and evil, the city of New Bristol was flung into a void of dimensions, and it drifted there. The residents hardened up, coping with all the challenges of their cosmic encounters and they got their hands on new technology.

Now the city is back and being primed for Savage Worlds and the Endless Realms systems. The target is CA$7,300, and you can follow progress on Kickstarter.

A pledge of CA$20 will get you either the Savage Worlds edition or the Endless Realms one in PDF.

You only need to step up to CA$30 to get the physical book thrown in as well. That’s about £18.

Geek Native spoke to Andrew, a designer who’s worked for White Wolf Games, Dream Pod Nine, FASA and Atlas Games about the importance of locations. I’m pleased to say that the blog was rewarded with an exclusive look at one of the more noteworthy settings within New Bristol.

Five Lakes University was one of the premiere technical colleges in the United States. Founded in 1812 by Thomas Reynolds, a renowned educator and botanist, the university has fostered a wide range of faculties. The small campus has grown in fits and starts over the years, and while it never reached the acclaim of other eastern universities, it does have a reputation for excellence. During the two world wars, the campus provided a number of focussed think tanks which, contributed to the war effort, mainly in the metallurgical and radiological fields. These two focusses came in very useful in helping the city survive its headlong travel through the dimensional vortex.

Archives
The university’s library system has been upgraded with the unique and varied technologies the city has encountered on its travels. Hard state crystal storage systems maintain all the city records and the amassed scientific data they have collected. This includes scientific exchanges with alien cultures and the data collected by University sampling teams. There is far too much data in these archives for the small staff to analyze. The City Council has mandated that only scientific advances necessary to support the growth and safety of the city should be pursued.

Power Generation
The revolutionary work of the physics and applied energy departments was pivotal in helping the city re-establish its power grid by tapping into the vortex. Vortex generators tap into the energy differential between the city and it outside environments. The differential is small but when it is spread across the surface of the large quantum collectors, the charge builds significantly. Across the city, small generator stations supplement this steady feed of power with traditional coal, wood and petroleum powered turbines. Of course, these stations are in the outer districts not in downtown where the noise, fumes and unsightliness would disturb the elite.

Dimensional Navigation
Dimensional analysis is the purview of the Cassandra Unit which focusses on understanding the visions of Cere-Belle and her cadre of psionics. Cere-Belle and her two acolytes are able to project themselves into the future and experience visions of where the city will travel next. They relate a description for the area to the navigation team as well as a rough idea of when the transition will occur. The Dimensional Navigation team is tasked with determining the physical properties of the new dimension, likely precautions the city should make and how best to utilize this new environment.

The Navigation team’s work is vital to the city’s well-being by preparing it for whatever new environment it finds itself in.

Ecological Response Team
The initial years of citywide starvation are long behind New Bristol due to the efforts of the horticultural and botany faculties of the university. They allowed the city to convert city parks into fields of produce and corn, as well as distributed seed to neighbourhood gardens and rooftop plantings across each district. Their scientists maintain watch over the delicate ecology of the city as teams of botanists, zoologists and geologists sample whatever new planet or time the city lands in. The wealth of knowledge and samples the teams bring back are astounding, if only they had the time to fully analyze the data.

Nature preserve
The university grounds include a 4,000 acre botanical park. This thick forested area was a serene nature preserve famous for its long winding walks through cool packed cedars and firs. Along the lakeshore, clammers would follow the tide revelling in the shellfish they found. Most of the city found their way into this park many times over the course of the year. However, the park has evolved into something very different from what the University founders intended.

The physics department maintain a small nuclear generator on the university grounds with the loop of a particle accelerator tunnelled beneath the park grounds. One of the earliest experiments intended to generate power for the city involved quantum resonance phased through the accelerator rings. Initially the experiment was successful, but as the city travelled thorough the time to the early Jurassic a portal was created allowing two way movement back and forward in time. As two-edged swords go this was a doozey. Scavenging teams were able to move back in time and harvest ancient plants and animals to feed the city. At the time, the population was desperate and starving. A cart full of proto-pineapples, leathery eggs and fresh meat was just what the town needed. What it didn’t need was the sporadic appearance of full grown dinosaurs stumbling through the portal.

Now the park is fenced off with a sonic barrier that encourages dinosaurs to move away from the city and Battalion soldier are occasionally required to take care of the more obstinate beasts. Within the park are a small group of naturalists that live side by side with the many many dinosaurs in the area. Surprisingly they have managed to establish a rapport with the herbivores and avoid the carnivores long enough to build a series of homes in the large forest canopy. From here, they guide scavenging parties through the portal and into the past to bring home sustenance.

The portal allows for two-way travel between the City and the Jurassic period of Earth’s past and as such it is a favoured hunting area for one of the city’s most recognizable inhabitants – Triceratops Rex. This creature was a defacto member of the Battalion of Evil, due to it being constructed and trained by Doctor Faustus’ science corp. The creature has grown past its initial programming and behavioural modification and is generally left alone by the city population. It can be territorial and of course will defend itself when attacked and hunt when its feels the need, but rarely is this within the city boundaries. The beast has a love hate relationship with the nature preserves other resident – Nyssa. The pair are often seen together hunting or feeding off of animals which have accidentally made their way through the quantum portal.

You can read more about New Bristol at Kickstarter.

Do you have any thoughts on this article? Let us know in the comments below.